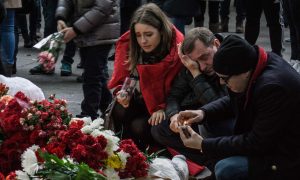 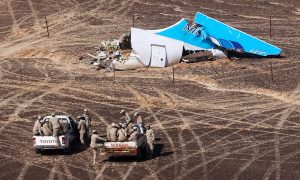 A Look at the Potential Causes of Russian Plane Crash
0 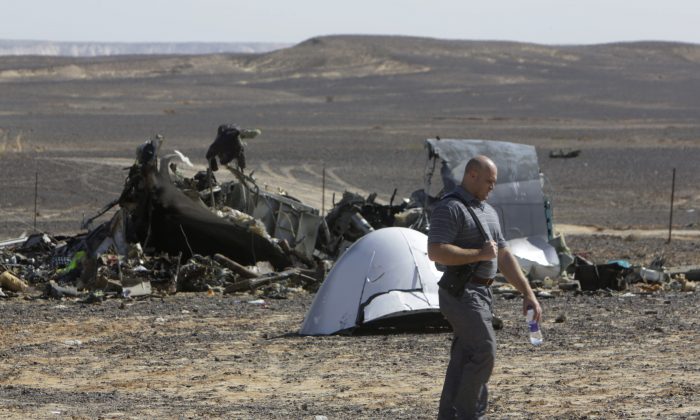 But he added, 'I wouldn't rule it out'
By Jack Phillips
FONT BFONT SText size
Print

The final moments of the Russian passenger plane that suddenly plummeted from high altitude in the Egyptian desert, killing 224, is shrouded in mystery and confusion. The airline on Monday, however, ruled out the possibility of a pilot error or a technical fault, but Russian authorities said those comments might be too early.

U.S. intelligence and other international experts said they were skeptical that the plane could have been shot down by terrorists affiliated with the Islamic State (ISIS), or other groups. The plane was flying Russian vacationers home to St. Petersburg from a Red Sea resort on Saturday morning. Some experts raised the possibility of a bomb on board the Metrojet Airbus A321. The Russian aviation chief, Viktor Sorochenko, said the plane broke apart in mid-air before crashing.

Amid the speculation, the U.S. Director of National Intelligence, James Clapper, said that it’s “unlikely” ISIS shot down the plane, “but [he] wouldn’t rule it out.”

“We don’t have any direct evidence of any terrorist involvement yet. ISIL had tweeted claims,” Clapper added, speaking at the Defense One Summit on Monday in Washington, D.C. He used the U.S. government’s term for ISIS.

All 224 people on board the aircraft died and the jet’s wreckage was strewn across miles of Sinai. The plane disappeared about a half an hour after it took off from Sharm El-Sheikh.

The crash prompted a statement from ISIS affiliates, which was circulated on Twitter, claiming it had been shot down due to Russia’s recent intervention in Syria. ISIS has frequently taken credit for high-profile terrorist attacks, including the mass shooting at the Charlie Hebdo magazine office in Paris in January, or the shooting at a military facilities in Chattanooga. It’s unclear if the attacks were connected to the extremist organization.

A Look at the Potential Causes of Russian Plane Crash

Russian President Vladimir Putin and Transport Minister Maxim Sokolov, the head of the government commission for investigating the causes of the crash, met on Monday in Putin’s office. According to a transcription of their talk, Putin called for “an objective picture” of what happened to “make the appropriate response.”

Earlier in the day, when questioned about the possibility of a terrorist attack, Putin’s spokesman, Dmitry Peskov, said all possibilities about the cause are being considered. “No theory could yet be ruled out,” he said in remarks carried by Russian state-run media, and he added that it’s “totally wrong” to make preliminary guesses.

But Alexander Smirnov, the head of MetroJet, said he rejected “human error” and “technical problems” as causes of the accident in a conference in Moscow on Monday. “The only possible explanation could be an external impact on the airplane,” he said, according to a video of his comments.

When he was asked for more details, Smirnov said he isn’t at liberty to discuss them because the investigation is ongoing. He didn’t explain if an object hit the plane or something else.

Alexander Neradko, the head of the Russian Federal Air Transport Agency, said claims of external factors causing the disaster should be taken with a grain of salt.

“It is completely premature to speak about the reasons of this as there are not grounds. And I’d like to call on the aviation community to refrain from any premature conclusions,” Neradko said in an interview with Rossiya-24 television. He noted there’s still much work to be done.

Whether it’s a terrorist attack or not, Clapper speculated that Putin, who he said thinks of himself as “a man on white horseback” riding into Syria to help, will probably send more ground troops to the war-torn country. “They will probably be drawn into sending more advisors,” he said at the conference.