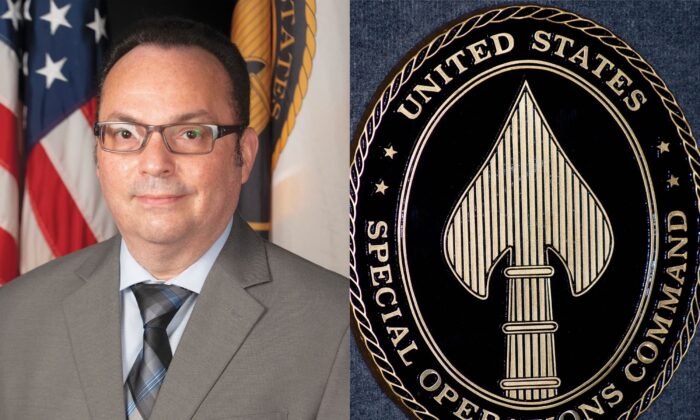 Richard Torres-Estrada, left, in an undated photograph. On right, the USSOCOM logo. (USSOCOM; AFP via Getty Images)
US News

USSOCOM earlier in the week announced the hiring of Richard Torres-Estrada as its chief of diversity and inclusion.

Torres-Estrada last year compared Trump, who was president at the time, to Hitler, who perpetrated the Holocaust, killing millions of Jews in Europe. He also made at least one other clear anti-Trump post, according to Facebook posts reviewed by The Epoch Times. In addition, Torres-Estrada posted an image expressing support for the radical theory of equity, which posits that an equal outcome among people is favorable to certain persons getting ahead of others.

The ideology has been reintroduced across the federal government by President Joe Biden, who reversed an order by President Donald Trump that had banned the use of training for federal employees based on the ideology amid deep concerns that it fostered racism.

Ken McGraw, a USSOCOM public affairs officer, told The Epoch Times on March 27 that the agency “was not aware of the posts” when it hired Torres-Estrada.

“Now that we are aware of the situation we are looking into it,” he added via email.

Torres-Estrada didn’t respond to a request for comment by press time.

He previously worked as an equal employment officer at the Washington Metropolitan Area Transit Authority and directed the Virginia Department of Human Resource Management’s Office of Equity, Diversity, and Inclusion, among other jobs.

Torres-Estrada was the focus of comments by Fox News host Tucker Carlson on March 26 for his social media posts.

“Who exactly is Richard Torres-Estrada? His Facebook page gives us some indication of who he is. On it, you’ll find an attack on the police, you’ll find crude BLM propaganda, you’ll find a picture of Donald Trump holding a Bible in front of a church. Next to Trump is a photograph of Adolf Hitler. The point is, they’re the same. So, this is the guy who now oversees hiring for the SEALs,” Carlson said on his show.

“If you’re wondering whether our military leadership has gone woke, consider that question settled for good. The Pentagon is now the Yale faculty lounge, but with cruise missiles. That should concern you.”

Carlson and the Pentagon got into a war of words earlier this month, with top military officials publicly criticizing the host after he lambasted Biden’s focus on adding more women to the military, asserting it came at the expense of accepting the best candidates and making sure America is ready to fight its enemies.