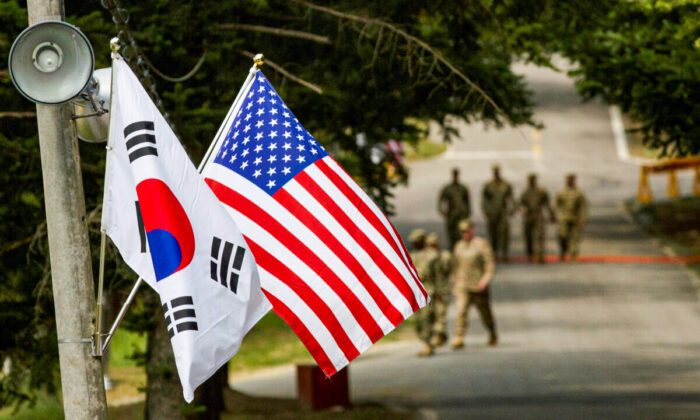 The South Korean and American flags fly next to each other at Yongin, South Korea, on Aug. 23, 2016. (Courtesy of Ken Scar/U.S. Army/Handout via Reuters)
Asia & Pacific

The United States and South Korea warned that any nuclear attack by North Korea would be met with an “overwhelming and decisive” response following North Korea’s adoption of a first-use nuclear doctrine last week.

The two allies issued a joint statement after a vice ministerial-level meeting of the Extended Deterrence Strategy and Consultation Group on Sept. 16, in which they expressed “serious concern” over North Korea’s nuclear law.

The United States and South Korea said that they would use “all available levers,” including diplomatic, informational, military, and economic instruments, to strengthen deterrence against the nuclear threat posed by North Korea.

“The United States committed to strengthen coordination with [South Korea] to continue to deploy and exercise strategic assets in the region in a timely and effective manner to deter and respond to [North Korea] and enhance regional security,” according to the statement.

The allies referred to the combined training of F-35A fighter jets in July and the upcoming deployment of the USS Ronald Reagan Carrier Strike Group in the region as “a clear demonstration of such U.S. commitment.”

“The United States and [South Korea] reaffirmed that [a North Korean] nuclear test would be met with a strong and resolute whole-of-government response,” the statement says.

The allies agreed to enhance alliance strategic readiness through improved information sharing, training, and exercises. They pledged to cooperate closely and “stand ready for all possible scenarios.”

North Korea last week approved a new law allowing it to conduct a nuclear strike “automatically” against any “hostile forces” posing an imminent threat to the nation, according to state mouthpiece Korean Central News Agency (KCNA).

The law states that North Korea will employ nuclear weapons only as a last resort, but that nuclear forces will be the primary policy of national defense to protect the country’s sovereignty, territorial integrity, and people.

In his speech, Kim referred to the United States as North Korea’s “nuclear enemy state” and blamed South Korea for aggravating military tensions in the region with its joint defense posture with Washington.

South Korean President Yoon Suk-yeol had offered to provide North Korea with what he called an “audacious plan” that would “significantly improve the country’s economy and its people’s livelihoods in stages” in exchange for complete denuclearization.

But North Korea rejected Yoon’s offer. Kim said that there will be no denuclearization talks, negotiations, or “bargaining chips” in that process.