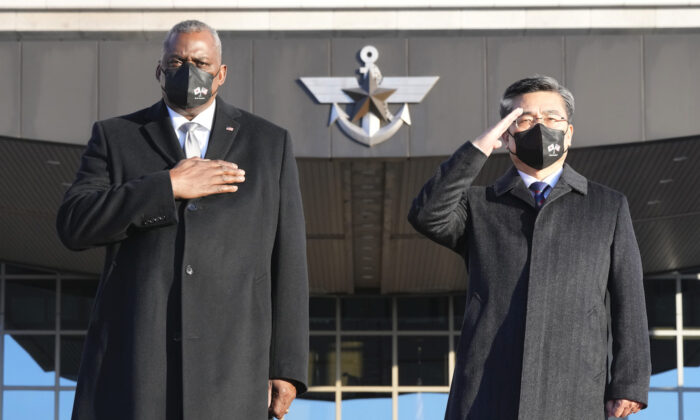 The U.S.-South Korea alliance is growing “stronger than ever”, with the two allies preparing to update strategic planning guidance to deter North Korea’s military threats, the military chiefs of both countries said in a joint statement.

U.S. Defense Secretary Lloyd Austin and his South Korean counterpart Suh Wook approved the new strategic planning guidance, which reflects changes to the strategic environment, in a meeting held in Seoul on Thursday.

The two chiefs said they are committed “to strengthening the alliance’s deterrence posture by leveraging all available alliance capabilities, including cyber and space capabilities”, and agreed to update operation plans in response to security threats on the Korean Peninsula.

“The Strategic Planning Guidance from 2010 still remains effective, but we’ve shared the need for a new war plan that could reflect evolving threats from North Korea and changes from our own defense reform and a combined command structure, as well as the overall strategic environment,” Austin told reporters.

The statement said that the Korean peninsula is one of the places on the globe where conflict could start with little notice, and the forces in South Korea—including 28,000 Americans—must be ready to “fight tonight.”

The two defense officials discussed the “fight-tonight” readiness of the combined force and looked at ways to enhance that readiness.

Looking beyond the peninsula, both nations committed to the rules-based order in the Indo-Pacific. “We also reaffirm the importance of deepening trilateral security cooperation among the U.S., the Republic of Korea, and Japan,” Austin said.

The joint statement also reaffirmed “the importance of preserving peace and stability in the Taiwan Strait”, echoing language used for the first time by South Korean President Moon Jae-in in May when he met with U.S. President Joe Biden in Washington.

Suh said the United States would maintain its current 28,500 troops on the Korean peninsula, and that the two allies made progress on meeting conditions for operational control transfer to South Korea.

Both chiefs aim to conduct a full operation capability assessment of the future combined forces command next year.

North Korea has been steadily developing its weapon systems amid an impasse over talks aimed at dismantling its nuclear and ballistic missile arsenals in return for U.S. sanctions relief.

In September, the country has reportedly test-fired a new hypersonic missile off its east coast towards the sea. State media described the new missile, dubbed the Hwasong-8, as a “strategic weapon,” implying that it has nuclear capabilities.

North Korean leader Kim Jong-un has also vowed to build an “invincible” military”, accusing the United States of being a “source” of instability on the Korean peninsula. Kim made the remarks at the Defense Development Exhibition on Oct. 12, which showcased an array of military hardware, including the country’s intercontinental ballistic missiles, reported the Associated Press.

At the press event following the meeting on Thursday, Austin was asked by a reporter if China’s own hypersonic missile program further complicates the situation in Korea.

“As we’ve said before, we have concerns about the military capabilities that the [Peoples Republic of China] continues to pursue,” Austin said.

“And the pursuit of those capabilities increases tensions in the region. We know that China conducted a test of a hypersonic weapon on the 27th of July,” he said.

“It just underscores why we consider the PRC to be our pacing challenge and will continue to maintain the capabilities to defend and deter against a range of potential threats from the PRC to ourselves and to our allies.”