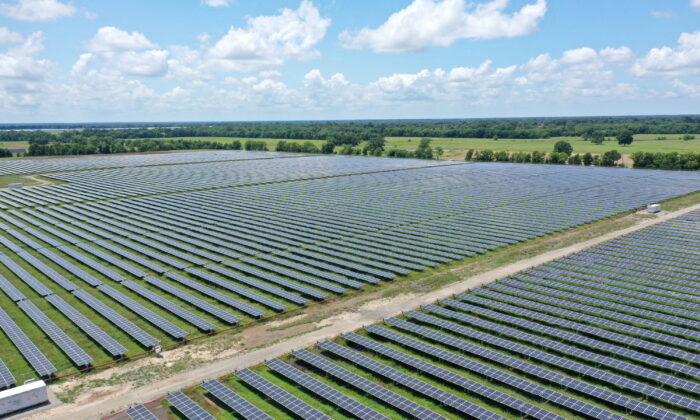 Solar panels in this drone photo at the Impact solar facility in Deport, Texas, on July 15, 2021. (Drone Base/Reuters)
Companies

US Solar Prices Soared Over 8 Percent in 2nd Quarter: Report

U.S. solar energy prices rose 8.1 percent in the second quarter as projects were stalled by a Commerce Department investigation into tariffs on products from Southeast Asia and soaring input costs, according to a report published late on Wednesday.

The increase during the period contributed to a whopping 29.7 percent rise in the combined price of wind and solar contracts, known as power purchase agreements (PPAs), from the previous year, according to a quarterly index by LevelTen Energy that tracks renewable energy deals.

LevelTen said it was too soon to say whether President Joe Biden’s decision in early June to waive tariffs on solar panels from the four Asian nations involved in the probe for two years would alleviate some of the cost pressure.

In a survey of 50 developers conducted by the firm, nearly a third said they needed further assurances that tariffs would not be applied retroactively if the Commerce Department implements them following the two year pause.

The higher cost of wind and solar contracts for corporate and utility buyers has tracked that of wholesale electricity prices, which are tied to the rising cost of natural gas, LevelTen said.