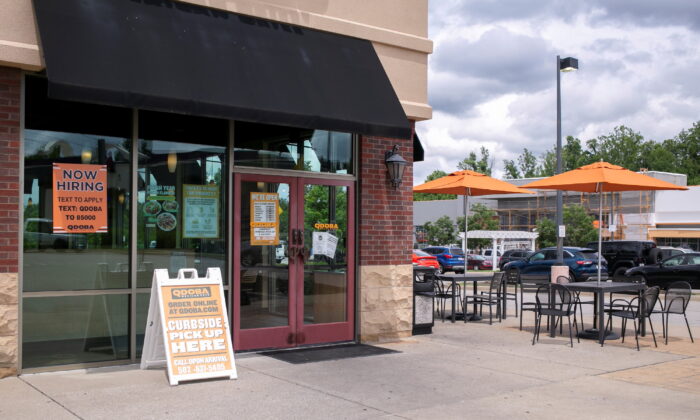 A hiring sign is seen in front of a Qdoba restaurant, as many restaurant businesses face staffing shortages in Louisville, Ky., on June 7, 2021. (Amira Karaoud/Reuters)
Economy

U.S. small business confidence fell to the lowest in over a year in February in the face of a wave of inflation that is forcing a record percentage of establishments to raise prices and denting their outlook for the economy, a survey showed on Tuesday.

The National Federation of Independent Business said its Small Business Optimism Index dropped 1.4 points to 95.7 last month from 97.1 in January. It was the lowest reading since January 2021.

More than a quarter of businesses cited inflation as their largest problem, the highest since 1981, while a record 68 percent said they were pushing through price increases of their own. But higher prices weren’t feeding through to bottom-line profit improvements in many cases, with a larger share of businesses reporting weaker earnings and more than 60 percent complaining of lost sales opportunities.

Supply chain ructions have been a consistent issue as the economy has rebounded from the short but historically deep recession two years ago caused by the COVID-19 pandemic. With demand—for goods in particular—far outstripping supply, inflation has surged to a four-decade high.

The inflation outlook has only worsened in March, with Russia’s invasion of Ukraine pushing up prices for everything from fuel to food, dashing the hopes of policymakers like those at the Federal Reserve for a leveling off in price pressures. Tuesday’s survey release made no mention of the war, which started in late February.

The Fed is expected to start raising interest rates next week by at least 25 basis points to tame high inflation, but the war in eastern Europe has raised uncertainty about just how far and fast the central bank will be able to go in removing the extraordinary accommodation it put in place two years ago at the start of the coronavirus pandemic.