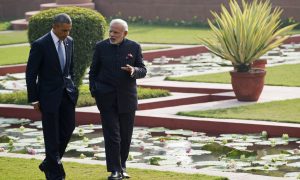 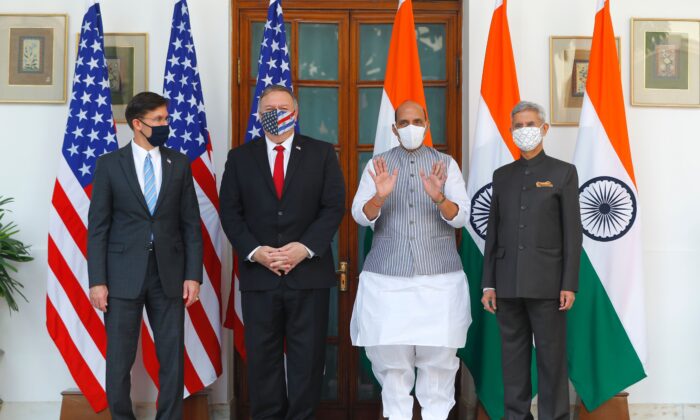 NEW DELHI—U.S. Secretary of State Mike Pompeo and Secretary of Defense Mark Esper signed a defense agreement with India on a recent visit amid concern over increased Chinese military activity in the region.

The two visited India for the third 2+2 dialogue on Oct. 26 and 27, days after a QUAD meeting between India, the United States, Japan, and Australia in Tokyo on Oct. 6. The various high-level meetings highlight the urgency toward strengthening defense frameworks in the Indo-Pacific area and set the stage for further cooperation, experts say.

“The BECA agreement will open the sharing of missile-related technologies between the U.S. and India … a vital technology for India to deal with China,” Dr. Satoru Nagao, a visiting fellow at the Hudson Institute in Washington who studies India’s military strategy and the Japan–India–U.S. security cooperation, told The Epoch Times in an email.

He added that this is the best time to strengthen security cooperation in the region against the Chinese, as the global impression of them has deteriorated during the pandemic.

“Because of China’s attitude, the image of China has worsened drastically. According to a survey by the Pew Research Center, the unfavorable image of China has risen in the U.S., Australia, UK, France, Germany, Canada, etc. Therefore, if the U.S. strengthens the security framework in the Indo-Pacific, now is the best chance to persuade many countries [to join],” he said.

The urgency behind strengthening security cooperation in the Indo-Pacific exists because the situation is serious, Nagao says.

“Firstly and most importantly, the security situation entered a very serious level both in Taiwan and the India–China border area. Now, China’s armed force is preparing a military operation in front of Taiwan,” he said. “Chinese fighter jets repeatedly entered Taiwan’s air space to pressurize Taiwan. And China is also redeploying the latest missiles and bombers from other areas to the India–China border.”

The QUAD members are set for a joint naval exercise called the Malabar exercise in the Indian waters of the Bay of Bengal from Nov. 3 to Nov. 6.

Pompeo and Esper, in their interaction with the press, during their travel both highlighted the security threats emanating from the recent Chinese behavior.

“Based on our shared values and common interests, we stand shoulder-to-shoulder in support of a free and open Indo-Pacific for all, particularly in light of increasing aggression and destabilizing activities by China,” Esper said at a joint briefing after the 2+2 meeting in New Delhi on Oct. 27.

The Chinese regime’s aggressive behavior in the past year has driven many strategic Indo-Pacific developments, according to Rajeswari Pillia Rajagopalan, a distinguished fellow and head of the nuclear and space policy initiative​ at the Observer Research Foundation, told The Epoch Times in an email.

“China’s efforts to cover up the pandemic—the kind of blame game that Beijing engaged in at the beginning of the pandemic, and its wolf-warrior diplomacy— have created more anger and resentment toward China,” she said.

“In addition, China’s aggressive behavior, including air intrusions and naval harassments against all its neighbors, including Indonesia, Malaysia, Vietnam, Taiwan, Japan, and India, have brought much of the Indo-Pacific powers including India, U.S., Japan, and Australia on the same page.”

In New Delhi we held our third U.S.-India 2+2 Ministerial, which reinforced our strong bilateral ties. The U.S. is proud of our relationship with India as we continue to cooperate on a breadth of issues, including security in the #IndoPacific region. pic.twitter.com/BCU3OmOAJp

China has been sitting inside Indian territory since spring, and India has already tested more than 12 missiles over a month and a half to reply to Chinese aggression, Nagao said.

“Recently, China moved H-6 bombers that can use cruise missiles from Wugong to Golmud [in Tibet] and Kashgar [in Xinjiang]. China also deployed a DF-21 missile at Kailash Mansarovar [in Tibet]. DF-21 can use a new type of warhead that the U.S. and Japan cannot intercept by using their missile defense system,” he said, noting that Pompeo recently indicated that China has deployed 60,000 soldiers on the Indian border.

He said the situation is concerning elsewhere in the Indo-Pacific as well—Beijing has increased its military activity around the Senkaku Islands of Japan and pushed the Japanese fishing boats into Japan’s territorial waters.

“In Taiwan, a Chinese Coast Guard ship shot in the air and rammed a Taiwan Coast Guard ship from the rear. As for Hong Kong, China passed a national security law to crack down on the democratic movement supported by most of the residents,” he said, adding that the  South China Sea situation is no better than when the Chinese sank a Vietnamese fishing boat in April.

“On disputed islands that it built, it has recently established new districts and two research facilities in an attempt to legitimize its claim, and it has fortified them by deploying new military aircraft. A Chinese survey ship escorted by Coast Guard ships also entered Vietnam’s and Malaysia’s exclusive economic zones to further military research.”

“China’s use of trade coercion because Australia asked for an independent investigation on the origin of the pandemic is pure and simple bullying, and the same treatment has been meted out to countries the world over,” she said.

“China has also been threatening countries like Sweden over its decision to reject Huawei for instance from the 5G competition, [which is] not winning hearts and minds anywhere.”

Nagao said China dispatched an aircraft carrier battle group around Japan, Taiwan, and the South China Sea to hold exercises and intimidate those countries. It also dispatched a fleet near Hawaii to target a U.S. military plane with a laser in international airspace and also sent 12 drones in the Indian Ocean to collect information for its submarine activity.

Pleasure meeting @SecPompeo and @EsperDoD. Happy to see tremendous progress made in India-US relations and the results of the third 2+2 dialogue. Our Comprehensive Global Strategic Partnership stands on a firm foundation of shared principles and common strategic interests. pic.twitter.com/cpUBzMYy80

The Indo–U.S. relationship has significantly evolved to more than non-alignment although still less than an alliance, Krzysztof Iwanek, the head of the Asia Research Centre at the War Studies University in Warsaw, told The Epoch Times on a chat platform.

Nagao said the various aspects of the deal signed between India and the United States last week hold greater significance.

“In this 2+2, the U.S. and India agreed to share satellite information on a real-time basis,” he said, as India deals with the crisis on its China border.

Rajagopalan said that because of China’s military aggression, many countries who were earlier reluctant to take a stand against China, have now adopted an “active response.”

“And its actions against Taiwan are strengthening U.S. commitment to defend Taiwan and growing recognition in the Indo–Pacific that other countries need to stand with Taiwan,” she said.

In our bilateral meeting, @rajnathsingh and I welcomed the conclusion of the Basic Exchange and Cooperation Agreement and discussed other shared priorities across our partnership. pic.twitter.com/pNTqn1s6pi

The Groundwork for QUAD Cooperation

While referring to the recent meeting and the upcoming QUAD naval exercises, Rajagopalan said that the four members of the QUAD—India, U.S., Japan, and Australia—are committed to “working together for a stable, secure, and prosperous Indo-Pacific.”

Nagao said that the groundwork to set up an operational QUAD is done and the Malabar exercise, which started as a bilateral naval exercise between India and the United States in 1992, is now a quadrilateral exercise, with Australia joining this year.

He said various bilateral agreements exist between the QUAD members and these are essential to conducting joint military exercises, for sharing information and supplies, and for accessing bases.

“To share supplies and accessing bases, ACSA (Acquisition and Cross-Servicing Agreement) or LEMOA (Logistics Exchange Memorandum of Agreement) is signed.” He added that Pompeo has recently talked about institutionalizing QUAD as a kind of Asian NATO.

Iwanek, however, said that the Asian NATO is uncertain and will take time to materialize.

“Also, as of now, India would not want it. New Delhi does not want to be a part of a formal alliance. But who knows, maybe this will change too,” he said.