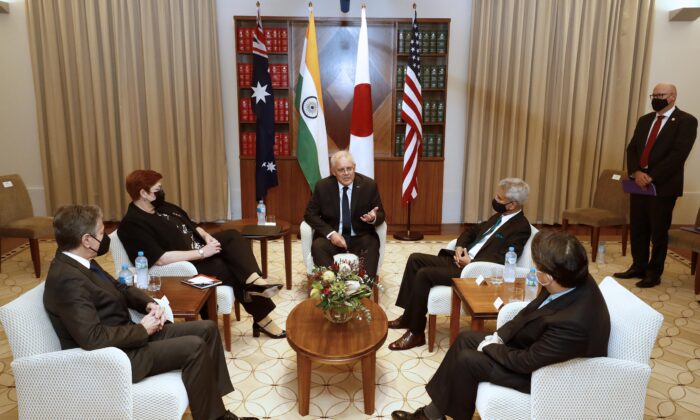 NEW DELHI—The United States and several allies have signaled a renewed focus on the Pacific Island with fresh visits and diplomatic engagements this month, but a lot more needs to be done to mitigate the Chinese regime’s influence in the region, according to experts.

Beijing has over the years steadily expanded its economic and political footprint in the South Pacific, a region that consists of 14 sovereign island nations and seven territories with a cumulative population of 13 million.

But as Washington and allies step up their commitment to the Indo-Pacific region to counter the Chinese regime’s growing assertiveness there, they have also set their sights on the Pacific Islands.

In a Feb. 11 meeting in Melbourne, Australia, of foreign ministers of the informal QUAD grouping of the United States, Australia, Japan, and India, the countries agreed to enhance their cooperation to ensure the region is “free of coercion,” a veiled reference to China.

The next day, the Biden administration released its Indo-Pacific strategy (pdf), which said Washington will focus on “every corner of the region,” including the Pacific Islands. Such intensified focus, the document said, has been necessitated by “mounting challenges, particularly from the PRC,” a reference to the People’s Republic of China.

Immediately after the Melbourne meeting, U.S. Secretary of State Antony Blinken visited Fiji—the first such visit for a U.S. secretary of state in 36 years. He also hosted a virtual meeting with leaders of 14 Pacific Island nations.

Around the same time, State Department announced that the United States would reopen its embassy in the Solomon Islands after 29 years to bolster its presence in the region. The move came months after rioters entered the island nation’s parliament and torched much of the capital Honiara’s Chinatown. The riots grew from peaceful protests stemming from ethnic tensions, economic problems, and concerns over the country’s growing links with China.

Cleo Pascal, an associate fellow at London-based think tank Chatham House told The Epoch Times that the Pacific Islands are strategically crucial for China in its bid to project power in the wider region.

“They are trying to gain influence in them in the typical CCP way, which is they come in with the commercial front, which has a strategic reason for it. And braided in it is the third element … the criminal activity,” said Pascal.

By criminal activity, Pascal said the CCP was promoting “corruption, organized crime, drugs, prostitution, and gambling,” all of which is destroying the social fabric of many Pacific Island nations.

After the end of the Cold War, the United States pulled back from the Pacific Island region thinking that it was not a strategic priority anymore, and delegated its “strategic oversight” to five key partners including Australia, New Zealand, and the UK, according to Pascal.

The U.S. administration closed embassies in the region and “Australia, New Zealand didn’t deliver what the people of the Pacific needed.” Pascal said. “In some cases, the relationship was barely post-colonial in the way that they tried to extract benefit for their businesses from the economies of the region,” she added.

In this context, when China entered the region with a “different offer,” she said. Beijing came in offering generous aid, investments and loans, signaling a long-term interest in these small island countries.

This was “understandably attractive at first look to a lot of countries in the Pacific,” she said.

Since then, the Chinese aid, investments, and lending in the region have increased manifold. While Beijing is not a dominant lender in the region, it has nonetheless used lending as a route to increase the presence of Chinese state-owned enterprises in the region.

The Chinese regime also uses the South Pacific region for military purposes, as it’s thee area it uses for the testing of long-range missiles, according to Satoru Nagao, a non-resident fellow at the Washington-based think tank Hudson Institute.

“All longer-range inter-continental missiles need long-range testing range and the South Pacific is the only place available for China. If China tests its missiles against the U.S. directly, the U.S. will retaliate. Thus China needs a safer direction as a testing place. That’s [the] South Pacific,” said Nagao.

In addition, there is growing unease about the possibility of Beijing growing its military footprint in the region. Last May, Kirabati, an archipelago nation in the Central Pacific, confirmed that the Chinese regime was financing plans to update a WWII-era airstrip on a tiny island 1,800 miles southwest of Hawaii. Kiribati’s assurance the project would be for civilian use did not assuage analysts’ fears that Beijing could use the strategically-located airstrip as a hub for espionage and military operations.

At a Feb. 12 joint press conference with the U.S. Secretary of State, Fiji’s Acting Prime Minister Aiyaz Sayed-Khaiyum said the pacific island nations felt they were forgotten by the United States, but Blinken’s visit showed that “America is back.”

“Fiji and America are both working to support a more secure, stable Indo-Pacific region, and indeed a peaceful region,” said Sayed-Khaiyum.

Blinken said that the U.S. wants to develop “sustained, innovative, mutually reinforcing partnerships across the Indo-Pacific” including with the Pacific Island Forum (PIF) which Fiji is chairing this year.

The PIF is the pacific’s main political forum, and was facing trouble last year after five Pacific Island nations decided to abandon the forum over a dispute about a leadership vote. But those countries agreed to temporarily revoke their withdrawal in February.

China had announced initiatives to expand ties with the PIF countries as early as 2003, and had even warned the member countries “from exchanges of an official nature or dialogue partnership of any form with Taiwan,” according to a release by the Chinese regime’s embassy in Papua New Guinea.

Pascal said that America has yet to resolve many issues with Pacific Island nations, in particular, the three Freely Associated States (FAS) of the Republic of Marshall Islands, Palau, and the Federated State of Micronesia. The FAS are independent nations that have signed a comprehensive agreement with the United States called a Compact of Free Association (COFA). Under the agreement, the United States provides financial assistance in exchange for full defense authority.

“So the people of these countries go and work in the United States. A lot of them serve in the U.S. military and the U.S. provides postal services and various other services within those countries. And the U.S. has strategic access and the right to strategic denial to other countries. It’s a very unique relationship,” said Pascal.

The COFA for all three FAS nations is due for renewal over the next two years. But the Biden administration has been slow in progressing renewal negotiations despite multiple bipartisan letters from Congress, said Pascal.

“If the U.S. relationship with the Pacific was truly on track instead of heading towards being on track, then Blinken should have gone to one of the Freely Associated States because those countries have very deep ties to the U.S.,” Pascal said, adding that this indicates that there are still some serious issues to be resolved with the FAS.

But Pascal acknowledged that recent moves by Washington, including its Indo-Pacific strategy and re-opening of its embassy in Solomon Island, was a step in the right direction.

It revealed an awareness within the U.S. administration that it needs to provide a “strategy for giving the people of Pacific the tools that they need in order to develop without becoming vassal states of China,” she said.