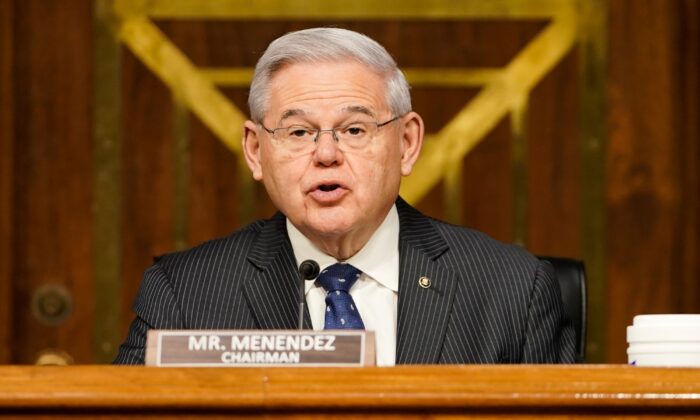 Sen. Bob Menendez (D-N.J.) says the United States should divert fuel to Europe to assist with energy disruptions there, he stated during the Senate Foreign Relations Committee’s May 12 deliberations on aid to Ukraine.

Menendez made the comment in the wake of significant disruptions in Europe’s energy market, which include Russian energy giant Gazprom cutting gas supplies to Poland and Bulgaria in late April for failure to pay in rubles, and, more recently, Ukraine’s state-owned pipeline operator halting the flow of Russian gas to Europe from a station in Luhansk in the Donbas region on May 11.

“In the short term, we need to consider helping. We should be diverting gas and oil to Europe because our allies have to keep the lights on,” he said. “In the medium and long term, investing and collaborating with the private sector and our allies on clean energy technology is the best way to isolate Putin and achieve independence from Russian energy supplies.”

No committee member opposed Menendez’s proposal, although some Republicans questioned why the Biden administration is restricting domestic production of natural gas amid global energy disruptions. Gas prices in the United States hit a record of $4.47 on May 15, according to AAA, just a day after reaching a high of $4.45, while crude oil continues to remain above $100 per barrel.

Sen. Rob Portman (R-Ohio) said the Biden White House should reverse its decision made last week to cancel three major offshore oil leases in the Gulf of Mexico and off the coast of Alaska, which blocks the opportunity to drill for oil in more than 1 million acres. Portman said freeing up domestic production would help the effort to punish Russia.

“I’ve been critical that the Biden administration has not done more to enhance our own production here, particularly with regard to natural gas that can be liquefied and sent to Europe,” he said. “I would hope that we would expand our production here quickly and stop the policies that are stifling the production, particularly of natural gas, and help with regard to the infrastructure that’s needed. And let the Europeans know that we are going to be there for them because we have the ability in this country to be able to provide that.”

Some Republicans have been growing more outspoken against sending aid to Ukraine while the U.S. economy is in the midst of rising inflation and sluggish growth. Rep. Marjorie Taylor Greene (R-Ga.) blasted Congress on the House floor on May 11 for considering a $40 billion aid package to Ukraine while there’s an ongoing baby formula shortage in the United States.

Sen. Rand Paul (R-Ky.) made similar comments when he moved to block the aid package on May 12.

“No matter how sympathetic the cause, my oath of office is to the national security of the United States of America,” he said on the Senate floor. “We cannot save Ukraine by dooming the U.S. economy.”

However, sending U.S. resources to Ukraine has bipartisan support in both the Senate and the House. The House approved the $40 billion aid package on May 10 in a 368–57 vote, and most senators have expressed support, Paul’s objections notwithstanding.

“We must keep up that support and make sure that as long as Ukraine is willing to fight, it is equipped to do so.”