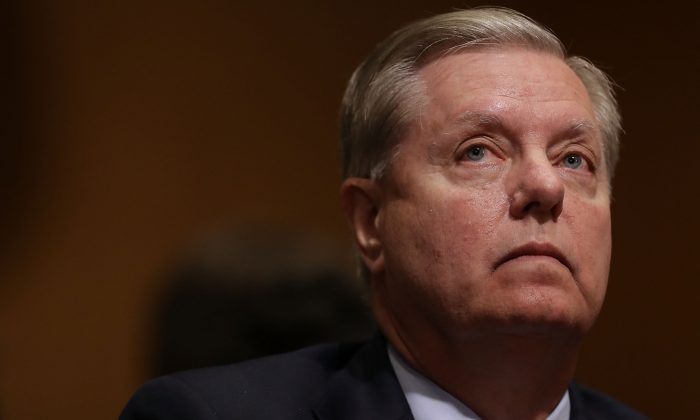 US Should Boycott Winter Olympics if North Korea Is Allowed to Send Team: Senator

The United States should boycott the upcoming Winter Olympics if North Korea is indeed allowed to send a team of athletes to participate, according to one U.S. senator.

North Korean dictator Kim Jong Un said during his New Year’s speech that he’d be open to sending athletes to the Winter Olympics, which take place in February in South Korea.

South Korean officials have repeatedly expressed their willingness to allow athletes from the communist North into the country to participate, and want to schedule talks including this issue with the North soon.

But Senator Lindsey Graham (R-S.C) says that if North Korean athletes are allowed in, the United States should react with a boycott of the entire Olympics.

“Allowing Kim Jong Un’s North Korea to participate in #WinterOlympics would give legitimacy to the most illegitimate regime on the planet,” he wrote on Twitter.

“I’m confident South Korea will reject this absurd overture and fully believe that if North Korea goes to the Winter Olympics, we do not.”

Allowing Kim Jong Un’s North Korea to participate in #WinterOlympics would give legitimacy to the most illegitimate regime on the planet.

I’m confident South Korea will reject this absurd overture and fully believe that if North Korea goes to the Winter Olympics, we do not.

It’s not the first time Graham has proposed an Olympic boycott. In 2014, he said the United States should boycott the Winter Olympics in Russia over the former Soviet country offering asylum to NSA leaker Edward Snowden.

The United States ended up participating fully in the event.

The United States, though, does have a history of boycotting the Olympics. In 1980, the country led a boycott of the Summer Olympic Games in Moscow to protest the late 1979 Soviet invasion of Afghanistan, according to the State Department.

In total, 65 nations refused to participate, versus 80 other countries that did participate.

“Within the United States, there was public support for the boycott. The U.S. House of Representatives passed a nonbinding resolution approving the decision to stay away from Moscow with a vote of 386 in favor and 12 opposed; the U.S. Senate passed a similar measure with a vote of 88 to 4,” the department stated.

“Technically, the decision of whether or not to send athletes to the Olympic Games does not actually rest with either the President or the Congress, however; it is the United States Olympic Committee (USOC) that makes the final determination in such a situation,” states the Department. “In the face of such broad support, however, the USOC expressed its willingness to respect the decision of the U.S. Government with regard to the games.”

The boycott was paired with increasing pressure on the Soviets to abandon the war in Afghanistan by issuing a trade embargo on grain and information technology, noted History.com. The United States also restricted Soviet fishing in American-controlled waters.

Robert Kelly, a professor at South Korea’s Pusan National University, said the participation of North Korean officials and athletes in the Olympics could lead to some awkward moments.

He told Reuters: “It puts the South Koreans in a weird position because it potentially creates tension between U.S. and Japan who have gone to lengths to isolate the regime.”