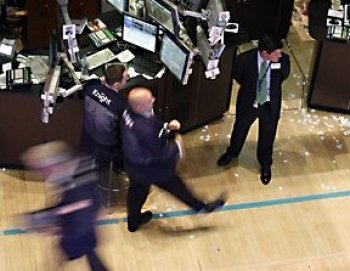 US Shares Jump on Jobs Data

NEW YORK—U.S. stocks were markedly higher in Thursday trading as investor confidence was boosted by two reports on the U.S. job market that came in ahead of expectations.

As consumer spending drives more than half of the U.S. GDP, Thursday’s news that the ADP jobs report and the federal government’s weekly initial unemployment claims report both showed better results than economists’ expectations were a boon to the equity markets.

Payroll processing firm ADP announced on Thursday that the U.S. private sector added 157,000 jobs last month, which is an indication that the broader job market may be on the rebound. The ADP report precedes the U.S. government’s monthly report on nonfarm jobs figures, which will be released on Friday, July 8.

The ADP report showed that 130,000 jobs were added in the services sector, and 88,000 were from small businesses. Large businesses added only 10,000 jobs last month. Economists polled by Bloomberg on average expected 60,000 new jobs from June.

“Given such strong employment results despite poor GDP, I am optimistic we will see improving job growth in the second half of the year," ADP Chief Executive Gary Butler said in a statement Thursday.

In a separate report, U.S. jobless claims dipped by 14,000 last week to 418,000, which is slightly less than the 425,000 new claims economists expected. On average, economists say that jobless claims under 400,000 are most preferable.

Investors and analysts will be keeping a close eye on Friday’s jobs report, as so far the U.S. employment picture has been mixed at best, especially in the summer when many manufacturers are shutting factories and certain sectors face summer seasonality.

"A rebound in employment growth from the weakness in May also can help the Fed avoid further discussion of the need for more easing and can also accelerate the pace at which the Fed moves to normalize its ultra loose monetary policy," according to Nick Nasad of FX Street, a foreign exchange trading information website.

Shares extended their recent rallies, buoyed earlier this week by news of the European Union reaching accord on Greece’s sovereign debt, and resisting the effects of credit ratings agencies’ downgrades.

Among the Dow’s top stocks were banking firms, including Bank of America Corp. and JPMorgan Chase & Co.

Shareholders of New York Stock Exchange parent NYSE Euronext on Thursday approved its sale to Germany’s Deutsche Boerse, clearing the way for a $10 billion merger, which would create the world’s biggest exchange for stocks and derivatives.

According to the company, 96 percent of shareholders approved of the deal, sending shares of NYSE higher by more than 35 percent Thursday.