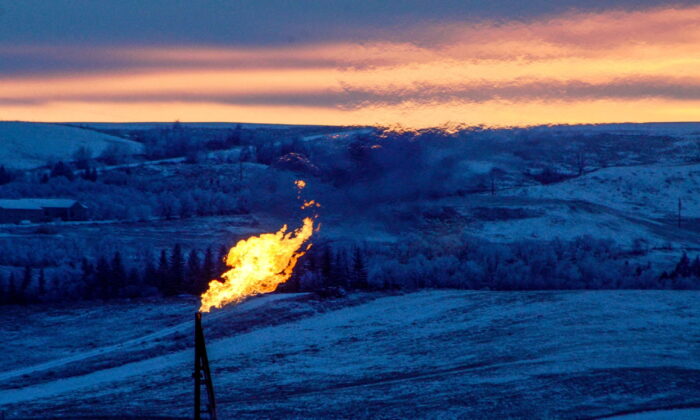 A natural gas flare on an oil well pad burns as the sun sets outside Watford City, N.D., on Jan. 21, 2016. (Andrew Cullen/Reuters)
Markets

US Shale Producers Seeking to Boost Oil Production Through Re-Fracking

Shale oil producers in the United States are resorting to “re-fracking” to boost the country’s oil output, as well as generate additional profits without having to make significant new investments.

Re-fracking refers to the practice of an oil company returning to old shale oil and gas wells that were fracked in the past, but are no longer in production. The process allows oil producers to take advantage of the higher than $100 per barrel oil price while also creating a higher output with a smaller investment, rather than having to develop an entirely new well.

“You go back and find where you maybe under-completed and under-fracked in the beginning,” Catherine Oster, who manages Devon Energy’s midcontinent properties, told Reuters. “We’ve made the infrastructure investment. As you learn about your resource, you get those technical learnings” that help decide which wells will benefit from a second shot.

Garrett Fowler, chief operating officer for ResFrac, which helps producers optimize the technique, has seen inquiries for re-fracking double in recent times compared to previous years. The process can increase oil flows from aging wells by two to three times, he said.

Experts estimate re-fracking to potentially be up to 40 percent cheaper compared to new wells.

Since Russia’s invasion of Ukraine in late February, oil prices have remained at elevated levels because of tensions over oil supply.

Oil prices also are being affected by refining capacity. Refiners are responsible for converting crude oil to products such as gasoline, jet fuel, and diesel. At present, there are fewer refineries in the country than there once were. At the beginning of 2022, the United States had five fewer refineries than at the start of 2020.

Some refineries closed after the COVID-19 pandemic crashed the demand for gasoline. U.S. refineries are currently operating at more than 90 percent capacity and are expected to run at 95 percent for the rest of the summer season, according to the Energy Information Administration (EIA).

Bringing back idle refineries can take years and is costly for refiners. And given the Biden administration’s alternative energy push, many refiners don’t see a financial incentive to invest in the business.

There hasn’t been a major new refinery built in the United States since the 1970s.