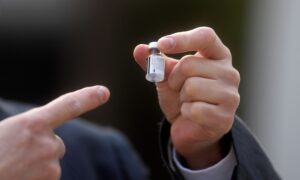 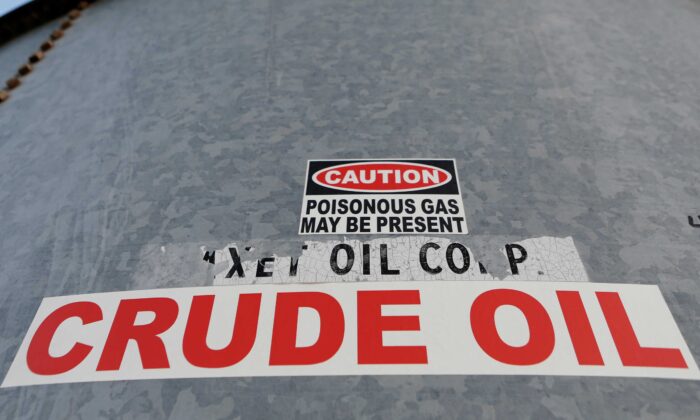 A sticker reads crude oil on the side of a storage tank in the Permian Basin in Mentone, Loving County, Texas, on Nov. 22, 2019. (Angus Mordant/Reuters)
Economies

NEW YORK/HOUSTON—U.S. shale producers are taking advantage of the oil market’s rally to levels not seen in nearly a year by locking in prices for future sales, sources familiar with the matter said.

U.S. crude futures this month jumped above $50 a barrel to the highest since February 2020. The rally has sparked optimism among shale companies, but after a bracing year of pandemic-induced demand destruction, they aren’t ready to ramp up production. Instead, they are using futures markets to lock in higher sale prices.

Shale producers buy and sell contracts in the futures and options markets in a process known as hedging to secure cash flows for later-dated sales.

U.S. oil production peaked at nearly 13 million barrels per day in late 2019, but is now around 11 million bpd after coronavirus lockdowns crushed fuel demand and oil prices. Output isn’t expected to rise much in 2021, but those that hedged now are guaranteed sales of barrels at more than $50 even if prices drop again.

“There’s a lot of hedging going on,” said Chris Wright, chief executive of Liberty Oilfield Services, the second-biggest fracking company in North America. “At the prices available today, producers with good acreage can do pretty well.”

Producers’ short positions in U.S. crude futures and options, an indication of hedging activity, have been rising since autumn. They jumped to the highest in more than six months in the week to Jan. 12, data from the U.S. Commodity Futures Trading Commission showed on Jan. 15.

In 2020, 46 North American exploration and production companies declared bankruptcy, according to energy law firm Haynes and Boone, while others merged to reduce debt. Investors had already been pressuring shale companies to curb spending and boost returns even before the pandemic.

“Producers locked in a certain amount of wells at a certain price and hedging at $50 makes you look like a rockstar. This year will be about free cash flow,” one executive at a U.S. shale producer said, on condition of anonymity.

Producers that are hedging are likely locking in about 15 percent to 20 percent of production at a time, said Tom Petrie, chairman at energy investment bank Petrie Partners.

Some companies are holding off because they anticipate prices to rise further, perhaps to $60 or $65. Global benchmark Brent crude, which also hit 11-month highs this week near $57, could rise to $65 per barrel by summer 2021, Goldman Sachs said this week.

“Some of them (producers) are pretty torn between hedging at a level they would have killed for six months ago and their perpetually optimistic nature,” said Steve Sinos, vice president at consultancy Mercatus Energy, which advises corporations on hedging.

Average 2021 U.S. crude prices have climbed above $52, also their highest since February.