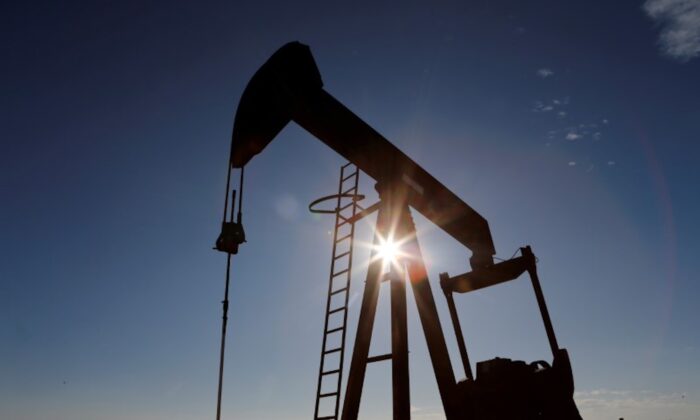 The sun is seen behind a crude oil pump jack in the Permian Basin in Loving County, Texas, on Nov. 22, 2019. (Angus Mordant/Reuters)
Companies

The sector, which has helped the United States become the largest oil and gas producer in the world, is in dire straits
By Emel Akan

WASHINGTON—The rapid spread of the novel coronavirus, coupled with the price war between Saudi Arabia and Russia, threatens the U.S. shale oil producers that are already struggling under large piles of debt.

The oil price has suffered from a sharp drop in demand in recent weeks as the CCP virus, commonly referred to as the novel coronavirus, pushes the global economy into recession. On top of this negative demand shock, a standoff between Saudi Arabia and Russia threatens to flood global markets with cheap oil if both sides fail to reach an agreement in the coming days.

West Texas Intermediate crude oil prices traded at $23 per barrel on March 25, which was down more than 60 percent since the beginning of the year. And Brent prices, the benchmark price for global crude oil, traded at $29 per barrel, down 57 percent year-to-date.

The average break-even price for shale oil producers is about $50 per barrel, according to a Dallas Fed energy survey. Before the virus, the sector was already under significant financial distress as most shale producers are debt-ridden. The steep drop in oil prices is hurting their cash flow and pushing them to the brink of bankruptcy.

The shale oil revolution, which refers to the combination of hydraulic fracturing and horizontal drilling, has made it commercially feasible for oil producers to recover more oil and gas. America’s energy independence is the result of the shale revolution, according to analysts.

It enabled the United States to significantly boost its production over the last decade, making it the world’s largest oil and gas producer. The shale production also helped the country to pull away from the periodic eruptions in the Middle East that threatened energy security.

Phil Flynn, a senior energy analyst at Price Futures Group in Chicago, said the recent price war between Saudi Arabia and Russia has “become a game of ego.”

“There seems to be an effort by either one or both parties to try to sink U.S. shale, and they’re doing it at a time when demand destruction is at an all-time high because of the coronavirus,” Flynn told The Epoch Times.

The Organization of the Petroleum Exporting Countries (OPEC), led by Saudi Arabia, had earlier proposed to cut 1.5 million barrels per day (bpd) output in April to cope with the CCP virus outbreak. Moscow, however, refused to support OPEC’s call for deep cuts.

In response, Saudi Arabia stated on March 10 that it would increase supplies to a record 12.3 million bpd in April, well above the current production level of 9.7 million bpd. The United Arab Emirates also announced that it would raise crude supply next month.

This price war “is going to create a major pullback in the U.S. shale industry,” Flynn said, adding that there are talks of oil prices continuing to fall into the single-digit level.

According to Flynn, Russia’s main goal is “to try to dump cheap oil in the world so they can sink U.S. shale.”

Goldman Sachs predicts that U.S. oil production will fall nearly 1.4 million bpd in the next 15 months as a result of reduced drilling and completion activity. And capital spending (capex) is expected to drop by 35 percent this year compared to 2019.

Chesapeake Energy Corp, which helped pioneer the U.S. shale oil revolution in the late 2000s, recently hired debt restructuring advisers, according to Reuters. The company is struggling with roughly $9 billion in debt, and its shares dropped more than 75 percent since the beginning of the year.

Tens of thousands of Texans are being laid off as companies shut drilling sites and rigs, a Texas regulator recently told Bloomberg.

The companies in the entire oil supply chain are also seeing the effects of the CCP virus and the price war.

The world’s biggest provider of fracking services, Halliburton, for example, recently announced that it would furlough nearly 3,500 workers at its Houston headquarters as oil producers cut back on spending.

“With many unable to fund updated capex plans organically, and some also faced with a wall of debt maturities that may be tough to refinance, the road ahead is challenging and ample liquidity is key.”

A senior executive at an investment management firm in New York, who wished to remain anonymous, said it’s been exceedingly difficult to raise capital for funds solely invested in energy.

“Institutional investors have been staying away because of environmental, social, and governance issues and to avoid criticism from people like Greta Thunberg,” he told The Epoch Times.

“It’s unfortunate. Firms like Chesapeake and Continental Resources are very innovative and revolutionized the oil and gas industry.”

The government is planning to fill the reserve to its maximum capacity by purchasing 77 million barrels in total.

“We’re seeing small employers laying off large numbers of people, we’re seeing capex being greatly reduced by companies like Continental Resources, Hess, and others,” he told Fox Business on March 24.

“I worry a little bit that the president rather likes these low gasoline prices,” he said. “Low gas prices are great if you’re able to drive.”

Cramer wrote a letter to President Donald Trump on March 18 urging him to embargo crude oil from Russia, Saudi Arabia, and other OPEC nations.

“Unfortunately, these bullying tactics by Russia have become the norm, but the actions of our close strategic partner Saudi Arabia are particularly concerning,” he said in the letter.

Trump earlier said that he “will get involved” at some point to stop the glut of oil in the market.

“In one way, our consumer is very much helped,” Trump said at a White House press briefing on March 19. “But, on the other hand, it hurts a great industry and a very powerful industry.”

He said the low oil price “is very devastating for Russia” and “very bad for Saudi Arabia.”

“They were in a fight on output. And at the appropriate time, I’ll get involved.”