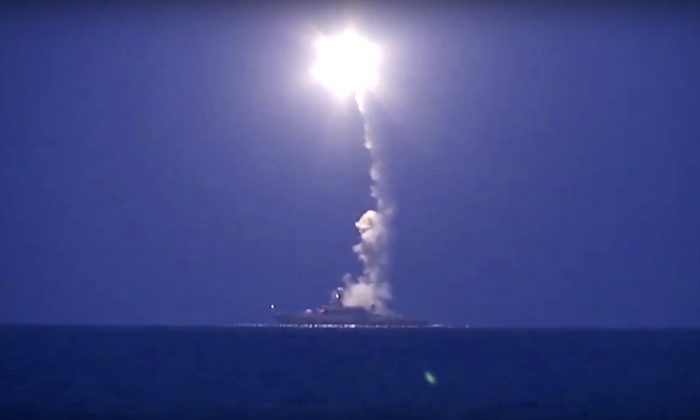 WASHINGTON—As many as four of the 26 long-range cruise missiles that Russia said it fired at Syrian targets landed instead in Iran, U.S. defense officials said Thursday.

The officials said it’s unclear whether the errant missiles, launched from Russian ships in the Caspian Sea, caused any significant damage in Iran. Both the Russian government and state-run Iranian media accused the United States of inaccurate or deliberately deceptive statements.

Three U.S. officials said four missiles went off course. The officials were not authorized to discuss the matter publicly and spoke on condition of anonymity.

The Russian government said on Wednesday that it launched 26 cruise missiles, hitting targets in north and northwestern Syrian provinces. It made no mention of any missiles going astray, suggesting that the operation was fully successful. The missiles’ intended flight paths took them over Iran and Iraq.

On Thursday, the Russian Ministry of Defense employed a little sarcasm in its denial.

“However unpleasant and ‘unexpected’ it may be for our colleagues at the Pentagon and Langley (CIA’s Virginia headquarters) about yesterday’s attacks by high-accuracy weapons on the (ISIS) infrastructure in Syria—all the same, all rockets fired from ships found their targets,” said a ministry spokesman, Maj. Gen. Igor Konashenkov.

Iranian government officials could not immediately be reached for comment, but the semi-official Fars news agency on Thursday said Western news reports about missiles going astray amounted to U.S. “psychological warfare” against Russia’s intervention in Syria. An earlier report by Fars on Wednesday quoted Iraj Saghafi, acting governor of Takab in northwestern Iran, saying an explosion heard in the region was “possibly related to work in a nearby rock quarry.”

The cruise missile attack in Syria was part of an expanding Russian military campaign that has deepened the divide between Moscow and Washington over how to approach the Syrian civil war and the presence there of ISIS fighters.

Kerry voiced concern that the ‘preponderance of targets’ being struck by Russian military forces in Syria aren’t related to ISIS.

Secretary of State John Kerry spoke Thursday by telephone with Russian Foreign Minister Sergey Lavrov for about a half hour, focusing primarily on Syria and Ukraine, State Department spokesman John Kirby told reporters. Kerry voiced concern that the “preponderance of targets” being struck by Russian military forces in Syria aren’t related to the Islamic State in Iraq and Syria (ISIS). Kerry told his counterpart that the United States was prepared to hold further discussions with Russia to avoid misunderstandings while both countries undertake missions in Syrian airspace, according to Kirby.

The Russian cruise missile strikes have added a new layer of uncertainty to efforts by the Pentagon to ensure the safety of U.S. and coalition pilots.

Kirby wouldn’t discuss reports of Russian cruise missiles landing in Iran, but said such evidence would only reinforce the need for the United States, Russia, and others to “deconflict” their various military efforts in Syria.

The talks, he said, also encompassed the importance of advancing a political transition away from Syrian President Bashar Assad and toward a new government.

The Russian cruise missile strikes have added a new layer of uncertainty to efforts by the Pentagon to ensure the safety of U.S. and coalition pilots who are flying daily in Syria’s airspace. Russia also is flying attack and reconnaissance missions over Syria.

Russia says its intervention is aimed at helping the Syrian government defeat the ISIS group, but local activists and U.S. officials say the strikes have also targeted Western-backed rebels and have had the effect of propping up the Assad government.