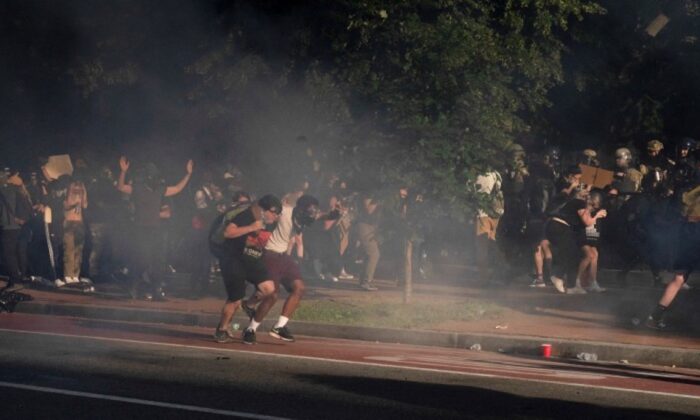 Protestors run as riot police fire crowd control devices and move on demonstrators to clear Lafayette Park and the area around it across from the White House in Washington D.C. on June 1, 2020. (Ken Cedeno/Reuters)
US News

The Biden administration agreed to amend some U.S. Park Police and Secret Service policies as part of a partial settlement agreement reached with Black Lives Matter protesters who were removed by law enforcement near the White House in June 2020.

The United States Park Police (USPP) and the United States Secret Service (USSS) agreed to update and clarify their policies governing demonstrations, and to implement the policy changes within 30 days.

The Justice Department said the changes are to settle claims in four civil lawsuits brought by demonstrators who said their rights were violated in Lafayette Square in Washington, D.C.

Policy changes within the law enforcement agency policies include more specific requirements for visible identification of officers, limits on the use of nonlethal force, and procedures to facilitate safe crowd dispersal.

The partial settlement agreement calls for Black Lives Matter D.C., a plaintiff in the litigation, to dismiss claims for non-monetary relief against the U.S. government. The plaintiffs are continuing to seek financial compensation from some defendants.

The U.S. government didn’t admit to any wrongdoing as part of the settlement.

The lawsuits alleged that federal agencies used unreasonable force to enable a “photo op” of former President Donald Trump holding a Bible outside of St. John’s Church, a historic building near the White House.

A U.S. government watchdog has rejected the claim that police cleared protesters so Trump could pose for a photograph. In a June 2021 report, the U.S. Interior Department’s inspector general said police dispersed protesters as part of a plan made earlier in the day for a contractor to install temporary fencing.

The USPP at the time said violent protesters started to throw “projectiles including bricks, frozen water bottles, and caustic liquid.”

Officers found “caches of glass bottles, baseball bats, and metal poles hidden along the street,” and that “intelligence had revealed calls for violence against the police,” Monahan said. To stop the violence, the USPP followed “established policy” and issued three warnings over a loudspeaker telling the demonstrators on H Street to leave the area, Monahan said.

“As many of the protesters became more combative, continued to throw projectiles, and attempted to grab officers’ weapons, officers then employed the use of smoke canisters and pepper balls,” the law enforcement agency said.

The updated USPP policy will require officers to wear fully visible badges and nameplates including on outerwear, tactical gear, and helmets; implement guidelines on the use of nonlethal force, including deescalation tactics; adopt clearer procedures for issuing dispersal warnings and permitting demonstrators to disperse, and strengthen pre-event planning and onsite coordination between USPP and other law enforcement agencies.

The USSS will also amend its policies to provide that the fact that some demonstrators have engaged in unlawful conduct doesn’t ordinarily provide blanket grounds for use of force, crowd dispersal, or declaration of unlawful assembly.

“We hope this updated policy can serve as a model for others to uphold civil rights and facilitate safe demonstrations.”