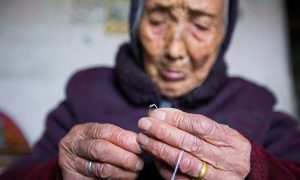 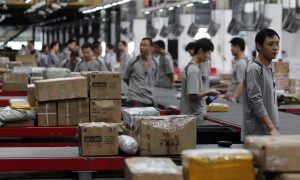 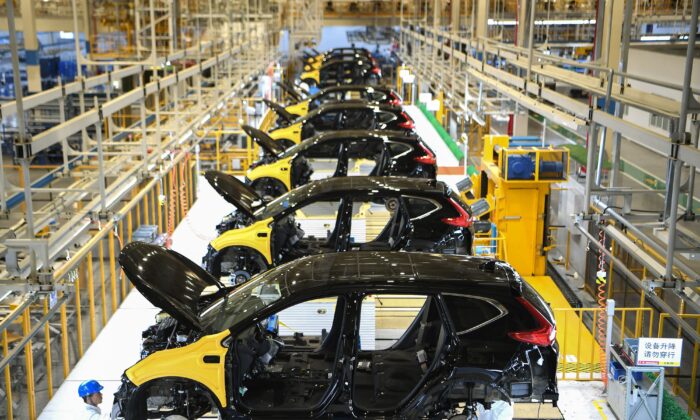 Employees work on an assembly line at the third auto plant of Dongfeng Honda in Wuhan in China's central Hubei Province, on Nov. 17, 2019. (STR/AFP via Getty Images)
China Business & Economy

Despite China’s labor force tripling from 341 million in 1950 to a peak at just over 1 billion in 2010, the nation’s old-age “dependency ratio” (ratio of population aged 65+ per 100 worker population aged 20 to 64) rose from 8.7 percent to only 12.4 percent, according to a report by China research firm Enodo Economics. As a result, China enjoyed six decades of high worker growth and modest cost burdens for retirement and healthcare.

Bringing China’s massive labor force into the World Trade Organization (WTO) in 2001 created an industrial dynamo that saw its share of global manufacturing value-added leap from 11 percent in 2005 to 25 percent by 2018. The biggest WTO member loser was the United States, that saw its global share plunge from 20 percent in 2005 to 15 percent by 2018, according to data from Enodo Economics.

China’s labor force passed 1 billion in 2010 and remained stable at that level over the last decade. The report found the WTO spike in labor demand and stalling labor growth caused average Chinese worker wages to increase by 326.6 percent from 2005 to 2017; about ten times faster than the 34.3 percent wage growth for the average American worker in the same time period.

China’s state-owned banks were able to internally fund the WTO boom at low interest rates because Chinese workers’ household savings rate soared from 36.5 percent in 2000 to peak at 51.7 percent in 2010. But due to an increasing percentage of retirees living off savings, the savings rate fell to 46.6 percent in 2018 and is continuing to fall fast.

China claimed in 2009 that it could expand manufacturing despite the end of the labor force expansion through retraining low-skilled workers to perform knowledge-intensive tasks. But China reported in 2018 that its workforce was mostly unskilled, with just 21 percent classified as “skilled” and only 7 percent classified as “highly-skilled.”

Not only are the number of Chinese college students declining, but 34.8 percent of graduates’ state that their “ideal job” is working for the Communist Party or a government organization, despite only 8 percent of job availability. About 45.2 percent of available jobs are private enterprises, but only 10.3 percent of college graduates call such a job “ideal,” according to a survey by JP Morgan, Tsinghua University and Fudan University.

Enodo Economics forecasts that China is at greatest risk for losing jobs where companies can increase profit margins by building highly automated factories that can benefit from American workers’ higher productivity working with collaborative robots (cobots).

A survey by Deloitte and the Manufacturing Institute found that among the top 400 American manufacturers, 70 percent are either creating or expanding their U.S. training programs. These manufacturers fear a 2.4 million shortfall by 2028 of American workers with the skills needed for the Fourth Industrial Revolution “that will transform the world of work through artificial intelligence, advanced robotics, automation, analytics, and the Internet of Things.”