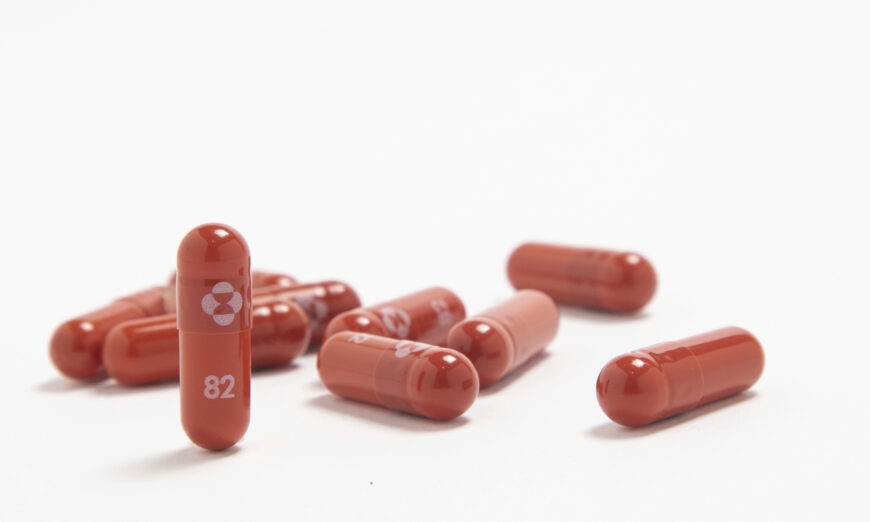 Merck's antiviral against COVID-19 is seen in an undated image. (Merck & Co. via AP)

Merck & Co. is set to receive $712 per treatment course for its COVID-19 antiviral pill from the U.S. government—even as it costs a fraction of that amount to produce and is reportedly on track for a price of $12 in India.

The gap between production costs and the price for molnupiravir is wide and emblematic of a problem that some say requires Congress or the U.S. government to intervene by implementing price caps, or utilizing so-called march-in rights. Others, though, warn that such measures would curb innovation and lead to fewer drugs coming onto the market.

Merck filed for emergency use authorization from the Food and Drug Administration for the oral drug last week, after it said an interim analysis of trial data shows it cut hospitalizations in COVID-19 patients. An FDA advisory panel will consider the drug in November.

The treatment, a collection of pills given over five days, would be the first of its kind since the pandemic started.

Originally developed by Emory University with U.S. government funding, the drug was licensed by Ridgeback Biotherapeutics last year. Efforts to win authorization during the Trump administration were stymied, leading Ridgeback to turn to Merck.

Researchers this month pegged the cost of production for the five-day treatment course at $17.74 (pdf) and estimated that Merck could make a sustainable amount even if it priced a course as low as $19.99.

Melissa Barber of the Harvard T.H. Chan School of Public Health and Dzintars Gotham of the King’s College Hospital used the cost of the active pharmaceutical ingredient and other numbers to calculate the estimate.

The U.S. government committed last year to obtain 1.2 billion treatment courses if the drug received regulatory clearance. According to a contract (pdf) obtained by Knowledge Ecology International, the cost of each treatment would be $712.

“This price is equal to about 35 times the estimated sustainable generic price,” Barber and Gotham said.

It’s also 46 times as much as Indian manufacturers plan to charge for a generic version, according to Leena Menghaney, the South Asia head of Médecins Sans Frontières’ Access Campaign.

“The molnupiravir case illustrates why the ‘TRIPS Waiver’ is so urgently needed, which would waive intellectual property for COVID-19 medical tools during the pandemic and would remove legal barriers so that countries the world over could produce versions of these medicines and more lives could be saved,” she said in a statement, referring to a proposal to waive intellectual property rights for COVID-19 vaccines and treatments.

Merck officials didn’t respond to requests for comment. After public criticism of the cost of the company’s antiviral, an executive, Dr. Nicholas Kartsonis, said the price it charged the U.S. government isn’t the final figure.

“We set that price before we had any data, so that’s just one contract,” Kartsonis told the Associated Press. “Obviously we’re going to be responsible about this and make this drug as accessible to as many people around the world as we can.”

Merck in a statement on Oct. 11 said it’s “committed to providing timely access to molnupiravir globally, if it is authorized or approved, and plans to implement a tiered pricing approach based on World Bank country income criteria to reflect countries’ relative ability to finance their health response to the pandemic.”

Cheaper Than Other Treatments

Remdesivir, the only approved treatment for hospitalized patients, costs an estimated $5 (pdf) to produce and was sold to the U.S. government for $2,340 a course—a price now pegged as too high for many patients. Monoclonal antibody courses, used to treat mild or asymptomatic COVID-19 cases, cost around $2,100 per course. The cost of production for the monoclonals isn’t clear.

Merck’s drug “is lower than a lot of the other treatments right now for COVID” and “certainly a lot cheaper in the United States of ending up in a hospital,” James Love, director of Knowledge Ecology International, told The Epoch Times.

“On the face of it, that doesn’t seem to be, initially, an irresponsible pricing decision for Merck,” he said.

If regulators do find the drug safe—there are concerns it could lead to the development of cancer—and authorize it in the United States, the calculus could change.

“Suppose that a new variant ended up infecting a significant percentage of the U.S. population and the drug was needed for 1 million, 10 million, or 50 million persons. At some point, the price just isn’t reasonable,” Love said in an email.

Dr. Roger Klein, a health policy expert who currently advises The Heartland Institute, doesn’t see the gap as a big deal, given that developing treatments are “really high-risk endeavors” that cost a lot of money, including millions of dollars just to run clinical trials.

“We don’t know how long these drugs are going to have a market within the United States, which is the world’s most important drug market in many ways,” he told The Epoch Times, adding that he believes the public health crisis from the pandemic is close to being over because of an increasing number of people gaining immunity through vaccination or prior infection.

Every treatment costs much more than vaccines. The shots have all been priced under $20 a dose, according to contracts between vaccine makers and the U.S. government.

One possible approach to lowering drug prices is utilizing various provisions of the Bayh–Dole Act of 1980, some experts say.

The act let the federal government retain some rights for inventions produced with government funding. It also enables federal agencies to use known as march-in rights, through which the government in certain circumstances can require a company to grant a license for a drug to an applicant. The government can grant the license itself if the patent owner refuses.

Some experts and advocates say march-in rights can be used to ease drug prices or provide leverage in negotiations on prices.

“Here, we think it is clear that Gilead has not established a reasonable price, nor has it met the health and safety needs of the public given the COVID-19 pandemic,” they wrote (pdf).

However, no federal agency has ever exercised the power, according to the Congressional Research Service and opponents say the law has only narrow application.

The National Institutes of Health (NIH) has said multiple times the act doesn’t authorize it to set prices, Dr. Mark Rohrbaugh, special adviser for technology transfer at the NIH, said during a panel discussion last year held by the Bayh–Dole 40 Coalition and Information Technology and Innovation Foundation. No other federal agency has disagreed with this position, he said.

Both the Trump and Biden administrations have rebuffed those calls and other efforts to cap prices during the pandemic.

“We can’t control that price because we need the private sector to invest,” Alex Azar, the health secretary at the time, said during a congressional hearing in February 2020.

Even if march-in rights can’t be used, the government can negotiate prices, others say.

The government’s funding and involvement with setting contracts with hospitals for remdesivir should have led to price concessions, Dr. Peter Bach, director of the Center for Health Policy and Outcomes at the Memorial Sloan Kettering Cancer Center, said during an Institute for Clinical and Economic Review (ICER) panel discussion last year.

Public Citizen, an advocacy group, has urged the Biden administration to use executive authority to impose “a reasonable pricing requirement” so that “taxpayers don’t pay twice for medicine developed with public funds—first funding research and development, and again through excessive prices.”

Gilead and Eli Lilly, which produces monoclonals, did not respond to requests for comment. A GlaxoSmithKline spokeswoman declined to provide information on the cost of production for the antibodies. A Regeneron spokesman told The Epoch Times in an email that monoclonals “are complex to develop and manufacture, requiring time, specialized facilities and expertise, hence the higher cost of this class vs. vaccines.”

“Monoclonal antibodies are intended primarily as treatment, and so also have cost-effectiveness in being administered only to high-risk patients who are otherwise likely to be hospitalized, as opposed to vaccines which are intended to be administered to all,” he added.

Prices can vary based on a number of factors, Merck says in a fact sheet, including value to patients and health care systems and the investment into research and development.

Other factors include what the market is willing to pay and the number of alternatives, according to Joey Mattingly, associate professor and vice chair of academic affairs at the University of Maryland School of Pharmacy’s Department of Pharmaceutical Health Services Research. The volume of sales also plays a role, as do getting large contracts from governments.

Drugmakers have long been accused of charging too much for products, especially drugs for rare diseases. Some experts and lawmakers have pushed to revamp the drug pricing system, but the issue has bedeviled Congress since the 1950s.

An agreement was close in the 1960s on a proposal by then-Sen. Estes Kefauver (D-Tenn.) to implement pricing caps and other ideas currently supported among some members of both parties. But Kefauver couldn’t ultimately secure enough votes, and the Kefauver–Harris Amendment that eventually passed focused primarily on drug safety and efficacy.

“There’s a lot of proposals out there, good or bad, and we’ll just see if it has the votes and the things that don’t have the votes will fall out and we’ll keep talking about it and then depending on how elections go over the next 10 years, maybe there will [be a change], but I’m not holding my breath, just because I know we’ve been on this journey for 60 years,” Mattingly said.