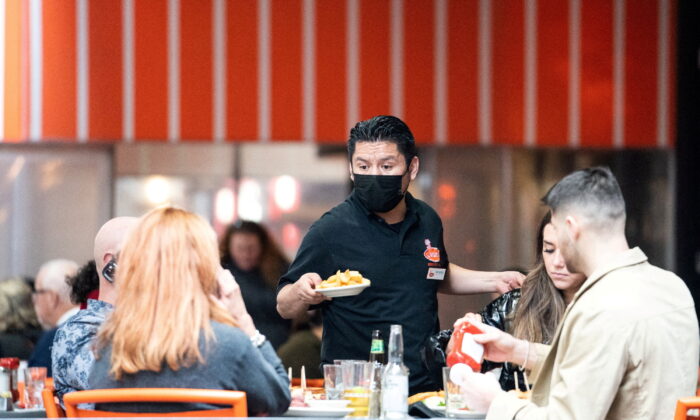 A waiter serves food at a restaurant near Times Square in New York, on Dec. 16, 2021. (Jeenah Moon/Reuters)
Economy

WASHINGTON—U.S. business activity slowed in April as soaring costs for raw materials, fuel, and labor pushed input prices to a record high, according to a survey on Friday, which also showed an ebb in sentiment at the start of the second quarter.

S&P Global said its flash U.S. Composite PMI Output Index, which tracks the manufacturing and services sectors, fell to a reading of 55.1 this month from 57.7 in March. That reflected a moderation in activity in the vast services sector. A reading above 50 indicates growth in the private sector.

“Many businesses continue to report a tailwind of pent up demand from the pandemic, but companies are also facing mounting challenges from rising inflation and the cost of living squeeze, as well as persistent supply chain delays and labor constraints,” said Chris Williamson, chief business economist at S&P Global.

The survey also showed businesses were passing on the higher cost burdens to consumers, with its measure of prices for goods and services produced by businesses hitting an all-time high. The record input and output prices suggest inflation could remain uncomfortably high, warranting aggressive monetary policy tightening from the Federal Reserve.

The U.S. central bank in March raised its policy interest rate by 25 basis points, the first rate hike in more than three years. Economists expect a half-percentage-point rate increase next month, and for the Fed to soon start trimming its asset holdings. Annual consumer prices increased in March at the fastest pace in more than 40 years. Inflation by all measures has overshot the Fed’s 2 percent target.

The flash composite input price index jumped to a reading of 80.5 this month from 77.1 in March, with price measures for both services and manufacturing industries increasing strongly.

The price squeeze has been worsened by Russia’s war against Ukraine, which has stalled the improvement in global supply chains. Lockdowns in China to contain a resurgence in COVID-19 cases is also adding to the pain.

With price pressures mounting, business sentiment slipped to a six-month low in April. The ebb in sentiment was across the manufacturing and services industries.

The survey’s flash services sector PMI fell to a reading of 54.7 from 58.0 in March. Economists had forecast an unchanged reading this month for the services sector, which makes up more than two-thirds of U.S. economic activity.

Its flash manufacturing PMI climbed to a seven-month high of 59.7 from 58.8 in March. Economists polled by Reuters had forecast the index for the sector, which accounts for 12 percent of the economy, dipping to 58.2.

Manufacturers also hired more workers at the quickest rate since July 2021. But many firms noted that “hiring needed to increase further to satisfy incoming new work.”