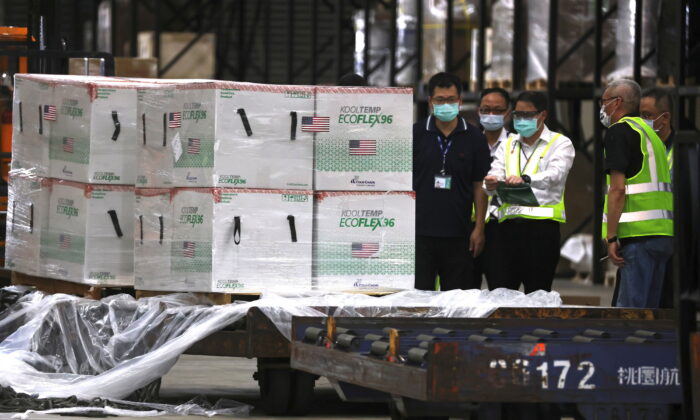 Workers transport Moderna vaccines shipped from the United States, to Taiwan Air Cargo Terminal at the Taoyuan International Airport in Taoyuan, Taiwan, on June 20, 2021. (Ann Wang/Reuters)
By The Associated Press

TAIPEI, Taiwan—The United States sent 2.5 million doses of the Moderna COVID-19 vaccine to Taiwan on Sunday, tripling an earlier pledge in a donation with both public health and geopolitical meaning.

The shipment arrived on a China Airlines cargo plane that had left Memphis the previous day. Health Minister Chen Shih-chung and Brent Christensen, the top U.S. official in Taiwan, were among those who welcomed the plane on the tarmac at the airport outside of the capital, Taipei.

Chen said that America was showing its friendship as Taiwan faces its most severe outbreak. “When I saw these vaccines coming down the plane, I was really touched,” he said over the noise inside a building where the boxes of vaccines, some with U.S. flags on them, had been brought on wheeled dollies.

Taiwan, which had been relatively unscathed by the virus, has been caught off guard by a surge in new cases since May and is now scrambling to get vaccines. The COVID-19 death toll on the island of 24 million people has jumped to 549, from only about a dozen prior to the outbreak.

The U.S. donation also signals its support for Taiwan in the face of growing pressure from China, which claims the self-governing island off its east coast as its territory. The United States does not have formal diplomatic ties with Taiwan under what is known as the one-China policy, but is legally bound by its own laws to ensure that Taiwan can defend itself.

“These vaccines are proof of America’s commitment to Taiwan,” said Christensen, the director of the American Institute in Taiwan, the de facto U.S. Embassy. “Taiwan is a family member to the world’s democratic countries.”

The United States promised 750,000 vaccine doses for Taiwan earlier this month, sending Sen. Tammy Duckworth (D-Ill.) and two of her Senate colleagues to the island aboard a military transport plane to make the announcement. Taiwan has ordered 5.05 million doses directly from Moderna but so far received only 390,000, including a second shipment that arrived Friday.

Taiwan’s President Tsai Ing-wen said the United States had decided to increase the donation through efforts on both sides over the past two weeks.

In a Facebook post, Tsai joined the United States in drawing attention to their shared democratic systems. The Chinese Communist Party, which has controlled China since 1949, says Taiwan must eventually come under its control and has continued to pressure Taiwan militarily.

“Whether it is for regional peace and stability or the virus that is a common human adversary, we will continue to uphold common ideas and work together,” Tsai wrote in Chinese.

She has accused the Chinese regime of blocking Taiwan from getting the Pfizer vaccine through BioNTech, the German co-developer. The Chinese regime has offered Chinese-made vaccines to Taiwan, but the government in Taipei has repeatedly expressed concerns about their safety and efficacy. Taiwanese law also bans the import of Chinese-made medicine.