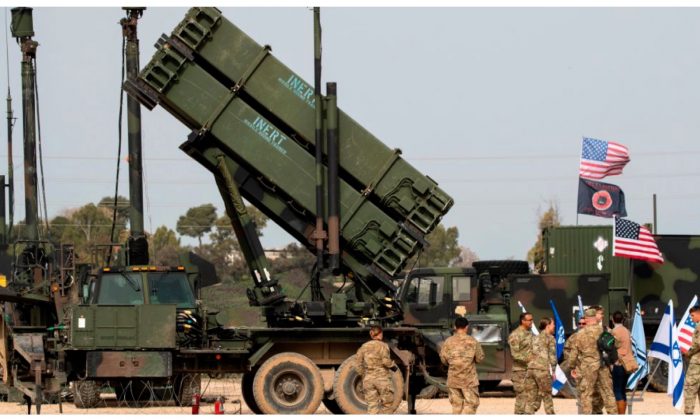 US army officers stands in front a U.S. Patriot missile defense system at the Hatzor Airforce Base on March 8, 2018. (Jack Guez/AFP/Getty Images)
International

The Pentagon has approved the deployment of a Navy ship and a Patriot missile defense battery to the Middle East, amid increasing tensions between the United States and Iran.

The USS Arlington, a marine transport ship, and a Patriot missile battery will now join what the United States had sent earlier in the week to the Middle East—the USS Abraham Lincoln carrier strike group and an Air Force bomber task force.

The Department of Defense (DoD) said in a statement on Friday, May 10, that the moves are in response to increased threats of possible operations against U.S. forces in the region by Iran.

“The Department of Defense continues to closely monitor the activities of the Iranian regime, their military and proxies,” the DoD said in the statement.

“The United States does not seek conflict with Iran, but we are postured and ready to defend U.S. forces and interests in the region,” it stated.

The DoD cannot disclose the exact details of the forces due to operational security.

The Patriot missile defense battery is a long-range air defense system that is combat-tested against tactical ballistic missiles, cruise missiles, and aircraft.

Carrier and Bombers a ‘Clear Message’ to Iran

U.S. national security adviser John Bolton said on Sunday, May 5, that the carrier strike group and bomber task force—sent earlier in the week—were “to send a clear and unmistakable message to the Iranian regime that any attack on United States interests or on those of our allies will be met with unrelenting force.”

Photos released by the U.S. Air Force show B-52 bombers arriving at the Al Udeid Air Base in Qatar on May 9, according to The Associated Press. Other bombers arrived at an unidentified location the day before.

The bombers were accompanied by the USS Abraham Lincoln aircraft carrier and other vessels. The carrier was sent there to replace a different American carrier that left the Persian Gulf in April.

President Donald Trump has been increasing pressure on Iran’s leaders, especially since he quit the Iran nuclear deal in May 2018 and gradually reimposed sanctions on the country in an effort to force the Islamic regime to change a plethora of activities the administration finds unacceptable.

The administration demands that Iran stops not only its nuclear technology development, but also its ballistic missile program, support for terrorists and militias in the region, and other destabilizing activities.

In early April, Trump announced he would designate Iran’s Islamic Revolutionary Guard Corps (IRGC) as a foreign terrorist organization—the first time the United States has marked a branch of another government as such, putting the IRGC into the same category as al-Qaida and ISIS.

While Iran says its missile program is defensive only, it has repeatedly threatened to disrupt oil shipments through the Strait of Hormuz in retaliation to the United States’s sanctions. The strait is a major choke point through which about a fifth of all oil consumed globally passes through. It is located between the Persian Gulf and the Gulf of Oman.

Furthermore, an IRGC commander threatened in November 2018 that U.S. bases in Afghanistan, the United Arab Emirates, and Qatar, and U.S. aircraft carriers in the Gulf were within the range of Iranian missiles.

On April 22, the Trump administration announced that it would end exemptions from the sanctions in May for countries that were still buying Iranian oil, in an effort to completely shut down Iranian oil and petrochemical exports, the regime’s top source of revenue.

On May 8, the Trump administration sanctioned iron, steel, aluminum, and copper exports from Iran, thereby choking off its second-largest source of revenue. Metals make up 10 percent of the Islamic regime’s exports.

“Because of our action, the Iranian regime is struggling to fund its campaign of violent terror, as its economy heads into an unprecedented depression, government revenue dries up, and inflation spirals out of control,” Trump said in a statement on May 8.

“We are successfully imposing the most powerful maximum pressure campaign ever witnessed, which today’s action will further strengthen.”

State Secretary Mike Pompeo said in July 2018 that the United States is willing to lift the sanctions, but listed 12 demands that the Iranian regime would have to meet. Those include ending its ballistic missile program, releasing detained Americans, ending the support of terrorist groups and militias including Hezbollah, Hamas, and the Houthis, as well as withdrawing its forces from Syria.

Though the Iranian economy has been choked by sanctions, the regime has refused to negotiate.