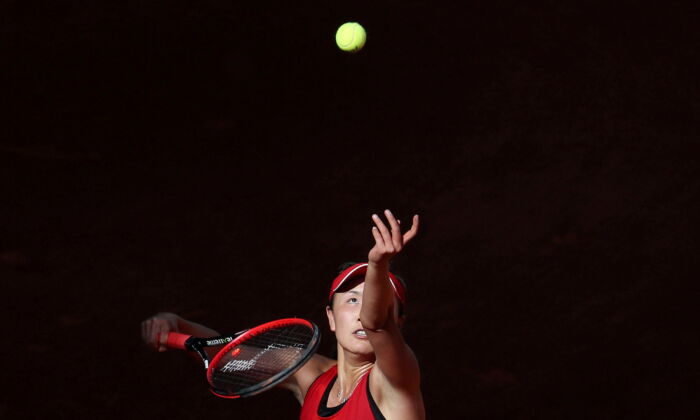 China's Peng Shuai in action against Spain's Garbine Muguruza during their round of 64 match in Madrid, Spain on May 6, 2018. (Susana Vera/Reuters)
China Human Rights

A bipartisan group of U.S. senators has introduced a resolution calling on China to guarantee the safety and freedom of tennis player Peng Shuai, and rebuking the failure of the International Olympic Committee (IOC) to “clearly and forcefully challenge” Beijing’s narrative over her well-being.

Sens. Rick Scott (R-Fla.) and Mark Warner (D-Va.) led their colleagues to introduce the resolution on Feb. 4. It states that the case of Peng is “directly related to broader international concerns” about the freedom of speech and safety of athletes competing in the 2022 Beijing Winter Olympics. It adds that the IOC’s response to the controversy surrounding Peng raises questions about its ability and willingness to stand up for the human rights of athletes participating in the Beijing Games.

“As the Olympic Games get underway, we must not turn a blind eye towards the disturbing human rights abuses by the CCP [Chinese Communist Party], and the IOC must join the broader diplomatic push for the freedom and well-being of Peng Shuai,” Warner said in a press release on Feb. 4.

Sen. Marsh Blackburn (R-Tenn.), co-sponsor to the bill, said in an emailed statement on Feb. 9 that Beijing has demonstrated it is “willing to disappear and silence anyone who questions them,” referring to the case of Peng, a three-time Olympian and former top-ranked doubles player.

The tennis player disappeared from public view for a few weeks in November after alleging on social media that she was sexually assaulted by a senior Chinese official. However, her eventual reemergence has not eased concerns by international bodies and officials say the Chinese Communist Party (CCP) has not been able to verify evidence of her safety and well-being.

Peng attended a series of recent events that were organized by Beijing, including a dinner with IOC President Thomas Bach; a controlled interview with French newspaper L’Equipe in which she was accompanied by a Chinese Olympic Committee official; and attending the Olympic events in which she was spotted talking to Bach.

During the interview with L’Equipe on Feb. 6, Peng said that her sexual assault allegation against former Vice Premier Zhang Gaoli on social media last November sparked an “enormous misunderstanding.” She retracted her allegation and denied going missing for weeks after making the allegation. The 36 year old also announced her retirement.

Chief Executive of the Women’s Tennis Association Steve Simon said on Feb. 8 that Peng’s first interview with a foreign news outlet “does not alleviate any of our concerns” regarding her previous allegation. The sports body had halted all matches in China indefinitely.

The IOC, which was the first international body to secure an interview with Peng after her disappearance, has drawn particular scrutiny for its uncritical relaying of Peng’s claims that she’s “safe and well.”

The Chinese Communist Party is using Peng Shuai as a puppet, and the International Olympic Committee is going along with it. Not only did a top CCP official sexually assault and disappear her, but now they’re forcing her to deny anything happened.

“The conduct of the International Olympic Committee runs counter to efforts by the United States Government, human rights organizations, the Women’s Tennis Association [WTA], and other international bodies and individuals to secure Peng’s safety,” the resolution reads.

Warner said in a statement, “The International Olympic Committee’s unwillingness to clearly and forcefully stand up to the CCP and call for independent assurance into the safety and freedom of Peng Shuai strongly suggests that the committee is willing to prioritize a relationship with China over athlete well-being.”

“The IOC must join the broader diplomatic push for the freedom and well-being of Peng Shuai,” he added.

The IOC didn’t respond immediately to a request by The Epoch Times for comment.