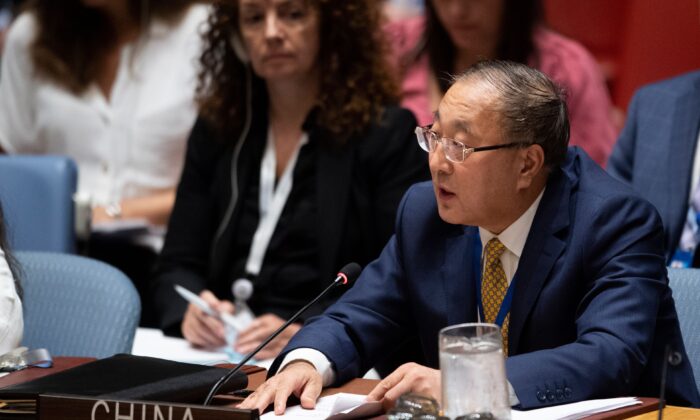 As world leaders convene in New York for the United Nations General Assembly this week, two U.S. senators have introduced a bill to investigate the Chinese regime’s influence in that organization and other international bodies.

Sens. Todd Young (R-Ind.) and Jeff Merkley (D-Ore.), who are both members of the Senate Foreign Relations Committee, introduced legislation on Sept. 23 that would require the U.S. Director of National Intelligence to provide a report on the Chinese regime’s objectives, tactics, and influence in international organizations.

“China is taking an aggressive stance at the U.N. to seize as much authority as others will allow,” Young, who also is chairman of the Multilateral Institutions Subcommittee, said in a statement. “We must protect our interests while ensuring China is acting for the benefit of the U.N. and all of its members.”

The move comes amid growing concern over the communist regime’s rapidly developing clout in international bodies. According to the statement, this leads to the risk that “China will undermine rather than advance multilateral solutions to pressing global challenges,” including human rights, nuclear proliferation, and global economic crises.

“Between eroding Hong Kong’s autonomy and horrifically violating the human rights of millions of Uyghurs in Xinjiang, the global community has well-founded doubts regarding China’s willingness to defend human rights standards in international organizations,” Merkley said.

Over the past two decades, the Chinese regime has increased its presence in the U.N. system as it rose into a global political and economic power, according to a recent report by Washington-based think tank The Heritage Foundation.

“China is interested in expanding its influence within the U.N., not because it supports the founding principles of the U.N., but in order to shift the values, programs, and policies of the U.N. in ways that benefit Chinese priorities and ideology,” the report states.

One area indicative of this rising clout is in the number of Chinese holding leadership positions at U.N.-affiliated bodies. Four of the 15 U.N. specialized agencies are now led by Chinese nationals: the Food and Agriculture Organization (FAO), the International Civil Aviation Organization (ICAO), the United Nations Industrial Development Organization (UNIDO), and the International Telecommunication Union (ITU).

That influence, the report said, has allowed the Chinese regime “to assert policies that are at odds with American interests, or are designed to blunt U.N. mechanisms deemed troublesome or problematic by China.”

For example, the ICAO has blocked Taiwan’s attendance at its meetings since 2016, despite the island being a major air traffic hub. Beijing claims Taiwan as part of its territory despite the island having its own democratically elected government and separate economic system, as the Chinese regime seeks to diminish Taiwan’s international presence.

The election in June of China’s former Vice Minister of Agriculture Qu Dongyu to head the FAO has further fueled concerns about the Chinese regime’s objectives.

Prior to the election, the United States circulated a non-official discussion document to FAO members outlining its case against the election of Qu, which was obtained by U.S. development news site Devex.

The document stated that Chinese officials, including “at INTERPOL, the International Telecommunications Union (ITU), and the International Civil Aviation Organization (ICAO) have demonstrated a bias towards Chinese foreign policy and a lack of transparency and accountability. … Chinese nationals working in international organizations are expected to align with Chinese policy without question.”

One Belt, One Road

The regime has in recent years used the U.N. and its affiliate bodies to promote its flagship One Belt, One Road (OBOR) foreign policy program to developing countries. The initiative, which started in 2013, seeks to bolster Beijing’s geopolitical influence by investing in massive infrastructure projects on the continents of Asia, Europe, and Africa.

For instance, since Zhao Houlin was elected to lead the ITU in 2014, the U.N. agency has assisted China in its rollout of the initiative.

In 2017, the ITU signed an agreement with China to help OBOR countries strengthen their information and communications technology (ICT) networks and services. In an interview with Chinese state-run media China Daily published in April, Zhao said he hoped to deepen ties with China using the OBOR as a platform.

“We hope to enhance our ability to deliver services and help with ICT development around the globe by cooperating with China through the Initiative,” Zhao said.

U.S. officials and experts have criticized the policy, saying that the infrastructure projects leave poorer countries saddled with debt. U.S. Secretary of State Mike Pompeo, speaking in London in May, slammed the Chinese regime for engaging in “corrupt infrastructure deals in exchange for political influence” and using “bribe-fueled debt-trap diplomacy.”

Also, the U.N. Development Program in September 2016 entered into a memorandum of understanding with China, pledging cooperation on OBOR. Since then, the agency has worked with OBOR-participant countries to help them achieve U.N. sustainable development goals.

Recently, Sen. Ted Cruz (R-Texas) urged the Trump administration to block the Chinese regime’s plans to install Andy Tsang Wai-hung, a former Hong Kong police chief, to lead the U.N. Office on Drugs and Crime. Tsang was criticized for his hardline tactics against protesters during the city’s mass pro-democracy movement in 2014.

“The U.N. has no business putting yet another Communist Party cutout in a leadership position,” Cruz told Fox News on Sept. 11.