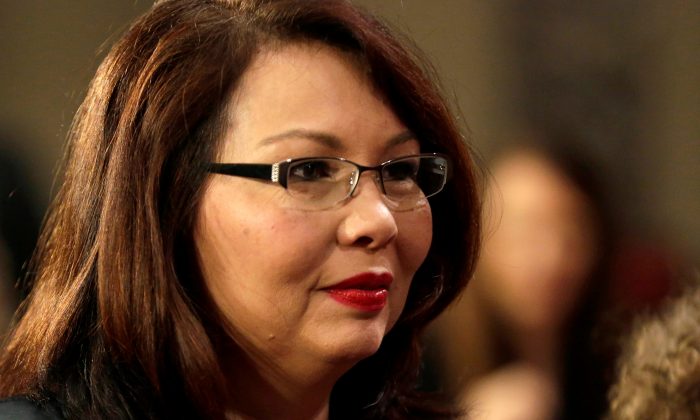 US Senator to Be First to Give Birth in Office

WASHINGTON–U.S. Senator Tammy Duckworth is pregnant with her second child and is on track to become the first U.S. senator to give birth while in office, the Illinois Democrat told a newspaper on Tuesday.

Duckworth, a former Army National Guard helicopter pilot who lost both legs when she was shot down in Iraq in 2004, is expecting another girl in late April, the Chicago Sun-Times reported.

Duckworth, 49, gave birth to her daughter Abigail in 2014 while serving in the House of Representatives.

She and her husband Brian Bowlsbey struggled with in vitro fertilization and she had a miscarriage during her successful 2016 Senate campaign, she told the Sun-Times in an interview.

“As tough as it’s been to juggle motherhood and the demands of being in the House and now the Senate, it’s made me more committed to doing this job,” Duckworth said.

Duckworth’s Facebook page displayed an e-card with three profiles of yellow ducks and a fourth smaller one trailing behind. “Wanted to share some exciting personal news …,” the card said. “Duck, duck, duck … duckling!”

Ten members of Congress have given birth while in office, and Duckworth will be the first in the Senate. The 100-member chamber has a record 22 female senators.

Illinois Senator Dick Durbin, a fellow Democrat, tweeted his congratulations. “Proud to have her as my Illinois colleague and prouder still that she will make history by being the first U.S. Senator to have a baby while in office. I couldn’t be happier for her,” he said.