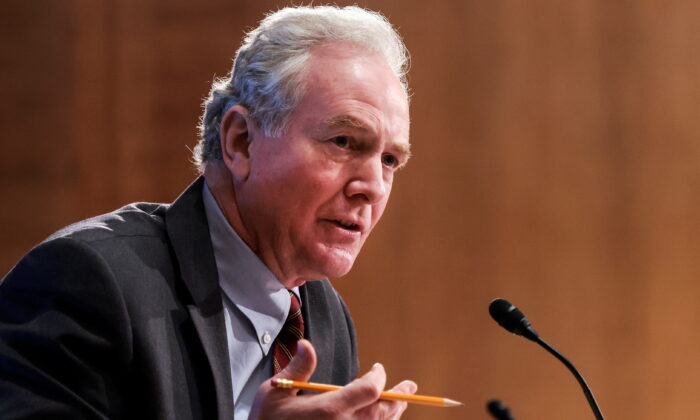 U.S. Sen. Chris Van Hollen (D-Md.) was hospitalized over the weekend after suffering a stroke.

Van Hollen, 63, the second Democrat senator to suffer a stroke in recent months, was admitted to George Washington University Hospital after experiencing lightheadedness and severe neck pain while giving a speech in western Maryland.

“An angiogram indicated that I had experienced a minor stroke in the form of a small venous tear at the beach of my head,” Van Hollen said in a statement late May 15. “Fortunately, I have been informed that there are no long-term effects or damage as a result of this incident, but my doctors have advised that out of an abundance of caution I remain under observation for a few days.”

Van Hollen said he plans to return to Washington by the end of the week.

Rep. Jamie Raskin (D-Md.) said he was sending good wishes and prayers for Van Hollen, who he said “gave an excellent and inspiring speech at the Western Maryland Democratic Summit even as he apparently suffered this mild stroke.”

The Senate is currently divided evenly between Republicans and Democrats. That means a single senator missing time can impact votes.

Sen. Ben Ray Luján (D-N.M.) suffered a stroke in January and was not able to perform all of his duties for over a month.

The senator, 49, was back in Washington on March 3.

Van Hollen was a U.S. representative for Maryland’s 8th Congressional District until 2017, when he assumed his current position. He is running for reelection.

Pennsylvania Lt. Gov. John Fetterman, a Democrat running for a Senate seat representing his state, was also hospitalized with a stroke, his campaign announced over the weekend.

Fetterman, who remains in the hospital, is staying in the race and urged people to vote for him.

Fetterman is one of a number of candidates running for a seat held by Sen. Pat Toomey (R-Pa.), who is not running for another term.

Each Senate race in the midterm elections is key as the parties aim to either maintain slim control of the upper chamber—Vice President Kamala Harris can break ties in her position as president of the Senate—or flip control.

The Pennsylvania primaries are set for May 17. The Maryland primaries are slated to take place on July 19. The general election is scheduled for Nov. 8.