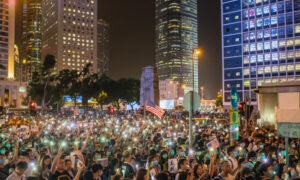 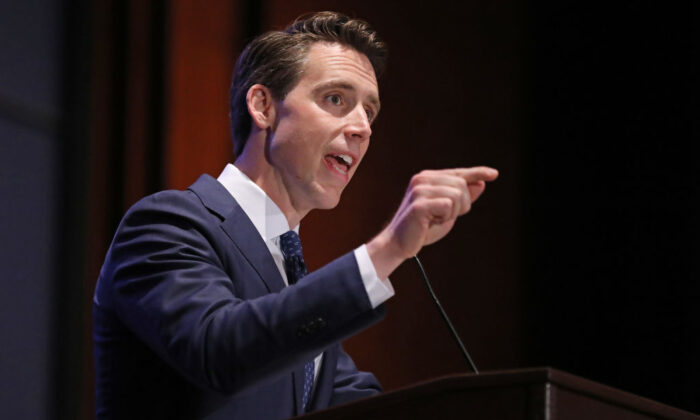 U.S. Senator Josh Hawley (R-Mo.) is calling on America’s ambassador to the United Nations to introduce to a resolution condemning China’s role in the current protests in Hong Kong.

“For five months, Beijing and its proxy chief executive in Hong Kong have been attempting to alter the city’s status and restrict its citizens’ freedoms, in apparent violation of Hong Kong’s Basic Law and the 1984 Joint Declaration,” Hawley wrote in a letter to Ambassador Kelly Craft, according to the senator’s office.

He stated: “Beijing has been clear that it no longer regards the Joint Declaration as binding, despite this instrument’s status in international law.

“Beijing’s actions in recent weeks reflects this disregard for its international commitments,” he added.

On Oct. 31, the Hong Kong government obtained a court injunction, censoring communication on the internet by way of banning messages that “incite” violence.

The 1984 bilateral treaty was drafted to stipulate how Hong Kong’s sovereignty would be transferred from Britain to China in 1997, whereby both sides agreed to retain the territory’s autonomy and its freedoms not afforded by the mainland regime under the “one country, two systems” model for 50 years.

“The Hong Kong executive has authorized violent force against unarmed demonstrators, has radically restricted the right of citizens peaceably to assemble, has intervened in District Council candidate selection, has illegally banned the use of face masks, and repeatedly laid siege to Hong Kong universities,” Hawley wrote.

Civil Human Rights Front (CHRF), the main organizer behind many of the massive marches seen in the city since June, has canceled a few march plans in recent months after failing to obtain police approval. Its subsequent court appeals were turned down.

On Nov. 20, CHRF announced that it has filed another police application to hold a rally at Victoria Park on Dec. 8—the day that the United Nations has designated Human Rights Day—according to an online statement.

“Hong Kong’s human rights violations and humanitarian crisis are reaching the tipping point now,” CHRF stated, adding that nearly 5,000 citizens, including minors and humanitarian workers have been arrested since June.

It added: “The executive government abuses its power and tolerates unfair enforcement of law by police.”

Several U.S. lawmakers, including Hawley and Sen. Jim Risch (R-Idaho), have previously voiced concerns about Beijing’s interference in Hong Kong’s local elections, pointing to Joshua Wong—activist and iconic leader from the 2014 Umbrella Movement—who was barred from running in the Nov. 24 district council elections.

At Hong Kong’s Polytechnic University (PolyU), several dozen to 100 protesters continue to be held up inside the campus, according to Julian Law Wing Chung, former political assistant to former financial secretary John Tsang Chun-wah. Law made the remarks while speaking to local media on Nov. 21.

Intense clashes between police and protesters at PolyU began this weekend. Since then, police have surrounded the school, preventing protesters from leaving. On Nov. 20, Hong Kong’s secretary of security John Lee said that about 600 people over the age of 18 had surrendered to police, to be arrested on suspicion of rioting.

According to a Nov. 21 article by local media RTHK, a 27-year-old protester still inside PolyU, who identified herself with pseudonym “A Dawn,” said she had been holding up inside the school for four days.

She explained that fighting for freedom, including the freedom of assembly, was what motivated her to join the action at PolyU. Now, she said she is preparing for the worst-case scenario—to go to jail after being charged with rioting.

“To protect the lives of those advocating for their basic liberties, I believe the time has come to consider introducing a United Nations resolution to condemn and hold accountable the People’s Republic of China (PRC) for its apparent treaty violations,” Hawley wrote.

Hawley concluded his letter by requesting that a United Nations’ Committee Against Torture review of Beijing and Hong Kong’s treatment of protesters in Hong Kong be considered.