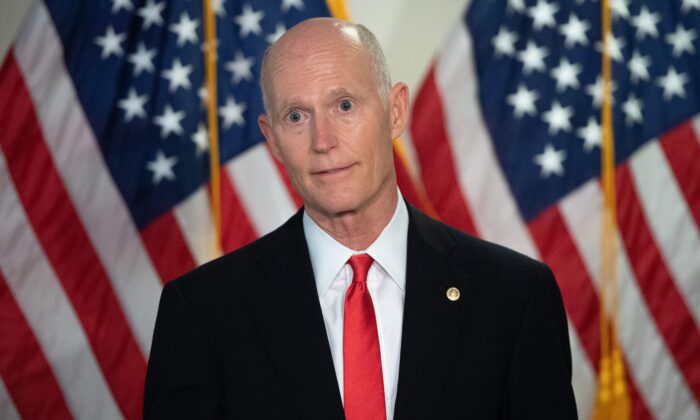 US Senator Criticizes WHO for Supporting Beijing’s COVID-19 Propaganda

The WHO team is currently in the city of Wuhan, the epicenter of the CCP (Chinese Communist Party) virus outbreak last year, investigating the origins of the pandemic. The CCP virus is responsible for causing the disease COVID-19.

Investigators began work on Jan. 28 after completing their mandatory quarantine. Since then, the team has visited areas including two local hospitals, a seafood market, and the exhibition.

The cavernous exhibition, which opened in October 2020, according to China’s state-run media, displays the CCP’s propaganda about its early responses to the pandemic. The content and narratives displayed all praise the CCP’s leadership in controlling the spread of the virus.

Evidence points to the virus as having originated from Wuhan before spreading to countries and regions around the world.

“Unbelievable. The @WHO continues to give oxygen to CCP propaganda and COVID lies. Biden’s Admin should rethink rejoining the WHO without significant reform and reassurances they will stop parroting General Secretary Xi,” Scott wrote on Twitter.

The CCP’s initial coverup of the virus outbreak has been well-documented. The regime silenced eight doctors, among them ophthalmologist Li Wenliang, after they tried to warn the public of a new form of pneumonia spreading in Wuhan in late 2019.

Former U.S. President Donald Trump announced that he was pulling the United States out of the WHO on May 29, 2020, saying that the WHO had refused to act on reforms recommended by the United States, including proving its independence from the CCP.

There are already signs that the Chinese regime is using the visit by WHO experts to promote its coronavirus narrative.

On Jan. 29, in a daily briefing, China’s foreign ministry spokesperson Zhao Lijian denied that the WHO experts in China were there to conduct an investigation.

“I’d like to stress that the exchanges and cooperation on origin-tracing between WHO experts and Chinese professionals are part of a global study, not an investigation,” Zhao said.

On Jan. 31, China’s state-run mouthpiece the Global Times posted to Twitter its report on WHO experts visiting the Huanan Seafood Market. It made an unsubstantiated claim that the initial outbreak in Wuhan might have “originated from imported frozen food.”

In response to such claims from the CCP in June 2020, the WHO stated in August 2020 that there is no evidence people can catch COVID-19 from food or food packaging.

China has also tried to pin the blame for the pandemic on countries including the United States, Italy, and India. For example, in March 2020, Zhao accused the U.S. Army of bringing the virus to Wuhan.

Before their investigation began, WHO investigators were warned that they must be able to counter China’s disinformation efforts, according to a Jan. 28 article published on The Strategist, a commentary and analysis website run by the Australian Strategic Policy Institute (ASPI) think tank.

“The WHO investigation team, and the international community more broadly, must be willing to counter any narrative that obscures the origins of COVID-19,” the article states.

The article was written by Yan Bennett, assistant director of the Paul and Marcia Wythes Center on Contemporary China at Princeton University; and John Garrick, a university fellow in law at Australia’s Charles Darwin University.

“The WHO research team faces serious challenges in seeking ‘truth from facts’ because the Chinese Communist Party under Xi Jinping’s leadership forcefully guards official narratives against critical commentary, especially when it comes from the international community,” the authors states.