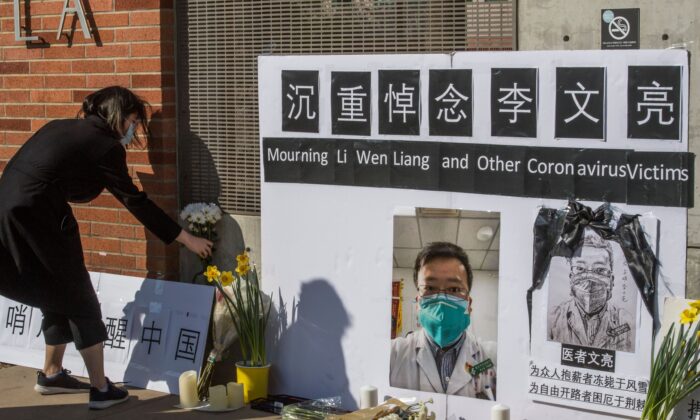 Chinese students and their supporters hold a memorial for Dr Li Wenliang, who was the whistleblower of the coronavirus that originated in Wuhan, China, and caused the doctor's death in that city, outside the UCLA campus in Westwood, Calif., on Feb. 15, 2020. (MARK RALSTON/AFP via Getty Images)
By Bonnie Evans

The U.S. Senate has honored the Chinese doctor who raised the alarm on the outbreak of the coronavirus late last year in the central Chinese city of Wuhan.

By unanimous consent, the Senate on March 3 passed Sen. Tom Cotton’s (R-Ark.) resolution to commemorate the life of Dr. Li Wenliang, an ophthalmologist who warned his former medical school classmates that the hospital where he worked had quarantined seven patients with a disease similar to SARS, the deadly respiratory disease that ravaged China in 2003.

Li later updated his closed WeChat group with the information that the disease was indeed caused by a coronavirus like the SARS virus, but that it was a new sub-type.

As Cotton said in his Senate floor speech about his resolution, “Dr. Li tragically fell victim to that very disease—but not before he was victimized by his own government, the Chinese Communist Party.”

Cotton’s resolution was co-sponsored by a bipartisan group of five other senators.

Perhaps the greatest irony for Li was that he was reportedly a member of the Chinese Communist Party (CCP), the very organization that forced him to recant the “rumors” he had spread.

The Chengdu Business Daily, in an article filed on Feb. 7, the day Li died, reported that the doctor had joined the CCP in his sophomore year of college. Less than 6 percent of all Chinese citizens are reported to be card-carrying Party members.

The resolution, titled “Commemorating the Life of Dr. Li Wenliang and Calling for Transparency and Cooperation from the Government of the People’s Republic of China and the Communist Party of China,” describes in detail the efforts that Li made to ensure that his former medical school classmates knew that a new type of SARS had hit Wuhan.

Posting the virus report in his WeChat group in the late afternoon of Dec. 30, Li urged his friends to take precautions for themselves and for their families. On Dec. 31, the regime said there was an unknown pneumonia in Wuhan. Around Jan. 8, it said there was a viral pneumonia. Not until Jan. 20 were the Chinese people told this new pneumonia was able to spread with human-to-human contact.

As reported in Beijing News on Jan. 31, Li said:

“At that time, 7 people from the South China Fruit and Seafood Market came to our hospital for treatment and were then quarantined. Initially, the test results of these seven individuals showed that they were infected with SARS coronavirus. I sent these messages in the group to remind everyone and their loved ones to take precautions. I also told everyone in the group not to circulate the news and test reports. I did not expect that the news would be spread out soon.”

China Digital Times reported, “Dr. Li’s death has galvanized public opinion in China, with untold numbers of Chinese netizens openly calling for freedom of expression, first with the hashtag #WeWantFreeSpeech, and then, when that was taken down by censors, #WeDemandFreeSpeech.”

According to the South China Morning Post, academics at Central China Normal University in Wuhan quoted China’s constitution, which guarantees freedom of speech, and posted a letter online calling for the government to admit its mistakes, apologize, and name Li a martyr.

Cotton’s speech and the resolution itself express support for the Chinese people and gratitude to Chinese medical personnel and citizens on the front lines of the epidemic.

The resolution goes on to urge China to be “open and transparent” in its investigation and response to the epidemic, and to ensure that “Chinese citizens and the international community have free and unfettered access, without censorship,” to information on the disease.

Included is a call for China to “cease efforts to exclude Taiwan from international organizations,” including the World Health Organization (WHO) and the International Civil Aviation Organization.

Foreign Policy noted on Jan. 22 that Beijing has been successfully blocking Taiwan from participation in international organizations since 2016, when President Tsai Ing-wen was first elected. China invokes the October 1971 U.N. resolution stating that the People’s Republic of China is the only legitimate representative of China to the United Nations as its tool to keep Taiwan out of WHO, despite cases of the coronavirus having found their way to the island.

Cotton, in his speech, called out Beijing for initially denouncing Li’s report. “That’s been the pattern of the Chinese Communist Party’s response to the coronavirus from the very beginning: First coverup, and then catastrophe,” he said.

The resolution closes by strongly supporting “the people of China in their demand for freedom of speech” and affirming that “freedom of expression is a social good that enables experts to sound public health warnings.”

Li was a 34-year-old native of northeast China’s Liaoning Province. He was married and the father of a 5-year-old child. His wife is pregnant with their second child.