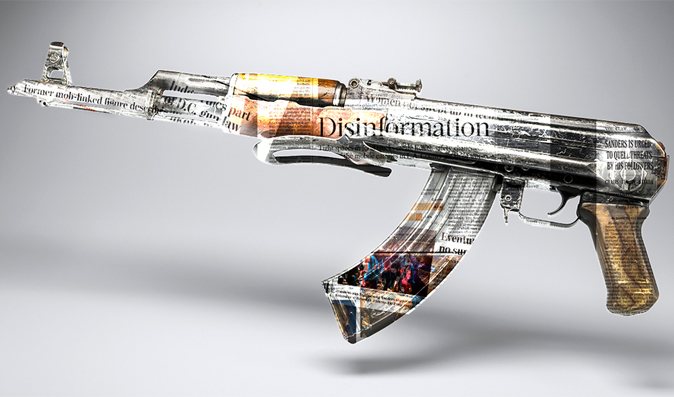 US Senate Bill Seeks to Shine Light on Foreign Disinformation

A man dressed like a U.S. soldier appeared in a video in September 2015, where he lined up the sights on a Russian-made Saiga 401K rifle and fired three shots into a copy of the Quran.

The video was widely circulated in Russia’s Muslim communities, where it sparked anger against the United States and its troops. It played on deeper anti-American sentiments, similar to when Florida pastor Terry Jones burned a Quran in 2011, leading to riots in Afghanistan, which killed 11 people.

But this latest video was a fake. Its source, according to a BBC investigation, was none other than Russia’s own disinformation office, the Agency for Internet Studies, also called the “troll farm.”

Similar fake stories aimed at smearing the image of the United States have been recently traced to the Agency for Internet Studies. The New York Times Magazine found in June 2015 that the office was also responsible for other fake stories, including one that claimed a Louisiana chemical company was leaking toxic fumes and another that claimed there was an Ebola outbreak in Atlanta.

Information operations like this are becoming common tools of foreign governments. For them, news has become a weapon, and they’re using it to prop up their regimes and to attack their enemies.

The United States may soon start fighting back with a new initiative to counter disinformation.

On May 16, a bipartisan bill called the Countering Information Warfare Act of 2016 was introduced to the Senate, sponsored by Sen. Rob Portman (R-Ohio) and co-sponsored by Sen. Christopher Murphy (D-Conn.). It has been read twice and referred to the Committee on Foreign Relations.

It states plainly that foreign governments including Russia and China “use disinformation and other propaganda tools to undermine the national security objectives of the United States and key allies and partners.”

Portman’s numbers seem to come from an April 2015 report in the Heritage Foundation, which states “Reportedly, RT has a budget of $400 million for its Washington bureau alone.” Its source is a 2014 report from the United States Advisory Commission on Public Diplomacy, which said “Russia spends more than $1 billion a year to support a media infrastructure that sows disinformation and counter-narratives to support its foreign policy.”

The damage caused by disinformation cannot be understated, and the propaganda tactic is a serious threat to democracy, according to Ronald J. Rychlak, a law professor at The University of Mississippi School of Law.

Disinformation is a particularly devious form of propaganda.

Rychlak co-wrote the book “Disinformation” with Lt. Gen. Ion Mihai Pacepa, the highest-ranking Soviet bloc intelligence official who ever defected to the West. The two detailed many of the false narratives spread by the Soviets, which today are taken as basic knowledge.

“We are a society that’s based upon free information, upon people trusting the information they receive and making wise decisions,” and this system is undermined when foreign governments intentionally spread false information to deceive people, Rychlak said, in a phone interview.

“It’s important for people to become aware of this, and in some way we fight back, because you can corrupt an entire system from seemingly within by providing information like that,” he said.

A Strategy of Deception

Disinformation is a particularly devious form of propaganda. One method is to manufacture news stories, often with a grain of truth, but with a false conclusion. The other method is to stage events, such as the fake video of the soldier shooting the Quran, and then spread a video or report of the fake event among the targeted population.

The tactic doesn’t end at the creation of a false story, however. As opposed to conventional propaganda, which is usually spread by state mouthpieces, a key goal of disinformation is to cause foreign experts and news outlets to spread the disinformation on the state’s behalf.

From there, the false stories start to take on a life of their own. As soon as a news outlet or expert picks up the disinformation, the state that created it can then use the false report as a source. It may then have a government official come out to publicly condemn the targeted country, citing the false news report, which incites other news outlets to also pick up the story.

After public sentiment gets riled up, foreign leaders are forced to respond. And with each report and statement, the false source of the disinformation gets buried deeper and deeper. The end goal is to make the false reports be viewed as common knowledge.

Rychlak said that when it reaches this point, disinformation “becomes part of our culture, part of the assumed knowledge, and this is why disinformation has been such an effective tool for our enemies.”

The Chinese regime has used this tactic to justify many of its human rights abuses.

On Jan. 23, 2001, five people in China set themselves on fire on Beijing’s Tiananmen Square. The Chinese regime’s state-run news outlets claimed the individuals were practitioners of Falun Gong. The incident was used by Chinese authorities to validate their persecution of the practice, which had started two years earlier, but which had little public support until that time.

The incident was quickly debunked as being staged by Chinese authorities. The Washington Post looked into two of the individuals and reported in February 2001 that nobody had ever seen them practicing Falun Gong. An award-winning video program, “False Fire,” also found numerous holes in the report—including a part in the video where a Chinese police officer can be seen killing one of the alleged victims with a blow to the back of her head.

The sheer volume of spies that have been deployed … It’s never been seen in the history of the world.
— Michel Juneau-Katsura, former chief, Asia-Pacific bureau, Canadian Security Intelligence Service

Despite the fact that the “self immolation” was debunked, even today some news outlets still cite the incident and repeat the Chinese regime’s disinformation, which according to the Falun Dafa Information Center was used by Chinese authorities “as a pretext to sanction the systematic use of violence and extrajudicial imprisonment against Falun Gong practitioners, leading to a surge in deaths due to torture and abuse in custody.”

The Chinese regime has also used disinformation heavily in its operations to undermine the United States and its global influence. The Diplomat reported in December 2015 that the Chinese Communist Party has several systems for these operations, including a guiding policy under its “Three Warfares” doctrine of legal warfare, psychological warfare, and media warfare, military operations for “soft power” carried out by its General Political Department, and operations by spies under its Second Department.

The Three Warfares strategy creates a perception of legitimacy for the Chinese regime’s land-grab in the South China Sea and other military operations, while trying to discredit military initiatives of other nations.

According to the think tank Project 2049 Institute, the bill’s focus on countering Chinese propaganda would be a first for the United States. It says: “The Pentagon has been aware of China’s expanding information warfare capabilities for over a decade, yet currently no single U.S. government organization takes on the role of developing a whole-of-government strategy to combat the threat of information warfare.”

The bill states that Russia, on the other hand, has been increasingly using disinformation to pursue “political, economic, and military objectives in Ukraine, Moldova, Georgia, the Balkans, and throughout Central and Eastern Europe.”

The new bill to counter information warfare is aimed particularly at disinformation campaigns that threaten the national security of the United States and its allies, but it would also aim to “protect and promote a free, healthy, and independent press in countries vulnerable to foreign disinformation.”

The War of Words

If the bill is passed, it would create a new office under the State Department tasked with identifying foreign disinformation and publicly exposing it.

According to William Triplett, however, who is a veteran of the Reagan White House and the American Intelligence Community, the bill may have a difficult time reaching that stage.

The problem, Triplett said, is that anything aimed at exposing Chinese disinformation, in particular, is going to ruffle the feathers of the numerous organizations that receive money from China—whether it be news organizations that run paid inserts of Chinese propaganda (such as The New York Times and Washington Post running inserts of China Daily, the Chinese regime’s main English-language propaganda outlet), businesses with financial interests in China, or paid agents of the Chinese regime working in various parts of U.S. society.

Triplett said he sees the bill as something important, but noted it would likely need more muscle behind it to break through the resistance.

While Rychlak also agreed that efforts to counter disinformation are important, he also expressed some concerns. The problem for him isn’t whether the bill can be passed, however, but instead the types of problems it may face afterward.

He said that if the U.S. government were to create an organization assigned to identify and expose foreign disinformation, that organization “will be the first thing our enemies will try to take hold of.”

Rychlak said it would also be risky, since it would establish an office with authority to say which information is true, and which is not.

He added, however, that “If we are to be a republic that rests on the idea of an informed populace making decisions, we need to have at some level the ability to see through, and that’s something most individuals don’t have the resources and ability to do.”

Within 180 days of being passed, the bill would establish a Center for Information Analysis and Response, through coordination with the Secretary of State, the Secretary of Defense, the Director of National Intelligence, the Broadcasting Board of Governors, and other departments and agencies.

The new center would then be tasked with collecting and analyzing information warfare efforts of foreign governments, and finding ways to work the information into a national strategy. It would have $20 million to hand out in grants to get help in this work from journalists, NGOs, private companies, and academics.

It would also aim to identify the systems leveraged by other nations in their disinformation campaigns—including front groups under think tanks, potlical parties, and NGOs, and extending to their use of spies assigned to “influence targeted populations and governments.”

While the concept may sound far-fetched, it’s unfortunately close to reality. In June 2010, the FBI arrested 10 spies from the Russian Foreign Intelligence Service, who were working to infiltrate U.S. think tanks and NGOs.

The center would work with various departments to “expose and counter” the information operations with its own “fact-based narratives that support United States allies and interests.”

Epoch Times has also exposed several Chinese spy programs designed for influence operations. Michel Juneau-Katsuya, the former Asia-Pacific bureau chief for the Canadian Security Intelligence Service, told the Epoch Times in June 2015, “The sheer volume of spies that have been deployed, the sheer volume of agents of influence that have been deployed—it’s just absolutely phenomenal. It’s never been seen in the history of the world.”