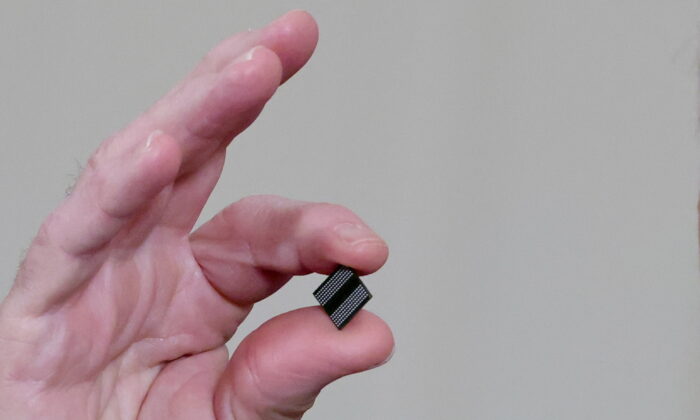 President Joe Biden holds a semiconductor chip as he speaks prior to signing an executive order, aimed at addressing a global semiconductor chip shortage, in the State Dining Room at the White House on Feb. 24, 2021. (Jonathan Ernst/Reuters)
Economy

The United States is facing a chronic shortage of semiconductor chips, and a long-term solution is desperately needed to avoid economic and national security risks to the nation, according to a new report by the Department of Commerce.

A government survey of more than 150 companies that produce and buy chips—aimed to provide insight into the complex and global semiconductor supply chain—found that urgent action is needed to resolve the crisis as soon as possible, as demand for chips could exceed supply for the next six months.

The White House asked both foreign and domestic chipmakers in September 2021 to submit supply chain information, including inventory data, demand, and delivery dynamics, by Nov. 8, 2021, in an effort to boost transparency and help understand where bottlenecks may exist in the semiconductor chip industry.

Specifically, the survey found that the median inventory held by chip consumers, which includes automakers or medical device manufacturers, has fallen to less than five days in 2021 from 40 days in 2019, prior to the COVID-19 pandemic.

Demand for semiconductors has increased by as much as 17 percent in 2021 compared to 2019, yet consumers aren’t seeing a corresponding increase in available supply, creating a major supply and demand mismatch.

The survey also found that the majority of semiconductor manufacturing facilities are operating at or more than 90 percent of their capacity to manufacture chips, meaning that they’re limited in their ability to produce more without building new facilities. Supply chain bottlenecks that are mostly hampering the semiconductor industry include the need for more plants, as well as the lack of raw materials needed for both semiconductors and the other components paired with semiconductors to assemble sub-parts for electric devices.

The Department of Commerce stated that if another severe COVID-19 outbreak were to happen or a natural disaster or political instability was to disrupt a foreign semiconductor facility for even just a few weeks, this could have potentially detrimental consequences in the United States, such as seeing a manufacturing facility within the nation shut down, leaving U.S. workers and their families at risk.

“The semiconductor supply chain remains fragile, and it is essential that Congress pass chips funding as soon as possible,” Secretary of Commerce Gina M. Raimondo said. “With sky-rocketing demand and full utilization of existing manufacturing facilities, it’s clear the only solution to solve this crisis in the long-term is to rebuild our domestic manufacturing capabilities.”

House Democrats unveiled legislation on Jan. 25 that would provide $52 billion in funding for semiconductor chips, including $2 billion set aside for chips used by automakers.

The legislation, the U.S. Innovation and Competition Act (pdf), aims to boost the country’s ability to compete with Chinese technology, and funding was approved by the Senate in June 2021. However, approval of the legislation has been hindered by disputes between the House and Senate over how to direct the funding.

“President [Joe] Biden has proposed $52 billion to revitalize our domestic semiconductor industry, and every day we wait on this funding is a day we fall further behind. But if we address this problem, we can create good jobs, rebuild American manufacturing, and strengthen our supply chains here at home for years ahead,” Raimondo said.