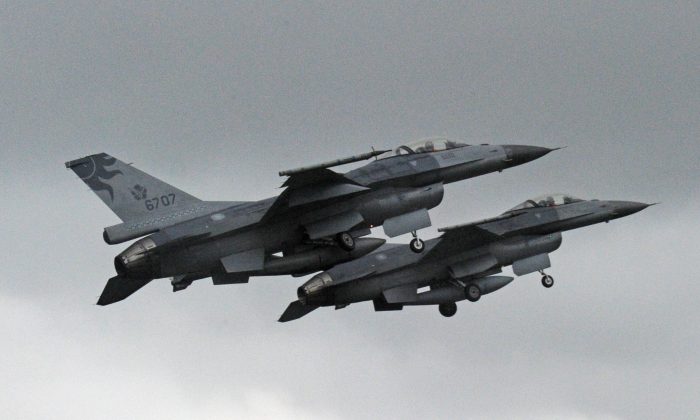 Two US-made F-16 fighters in the air during an scramble take off at the eastern Hualien air force base on Jan. 23, 2013. (Sam Yeh/AFP/Getty Images)
US-China Relations

Taiwan’s acquisition of over 60 Lockheed Block 70 F-16C/D Vipers fighter jets will delay the risk of a successful invasion by the Peoples’ Republic of China for up to a decade.

Taiwan’s Air Force on August 16 posted a Facebook infographic declaring the United States will sell Taiwan its fourth generation advanced F-16V fighters in “Minguo 108,” or 2019 under Taiwan’s calendar marking the 1912 founding of the Republic of China.

Reports quickly followed that the Trump administration had submitted the fighter sale to Congressional leaders that had already given bipartisan support. The Trump initiative comes after the People’s Republic of China declared the sale would cross a “red line.”

Under the 1979 Taiwan Relations Act, United States has sold Taiwan $15 billion of military equipment since 2010. The Trump administration submitted a request to Congress in mid-July to sell $2.2 billion in M1 Abrams tanks, FIM-92 Stinger short-range surface-to-air missiles, and various hardware, ammunition and services to Taiwan.

Despite China on a crash program to upgrade its 1,700 fighters fleet with Russian top of the line SU-35 fighters and deploying its world-competitive fifth-generation J-31 and J-20 stealth fighters, the Obama administration refused an $8 billion a request in 2010 to sell Taiwan 66 advanced F-16C/D fighters to replace its 60 antiquated French Mirage 2000 and indigenously 40 F-CK-1 fighter jets. The administration eventually did approve upgrading Taiwan’s aging 144 F-16A/B fighters that were already 18-years old.

In March, the US Secretary Of Defense’s 2019 Annual Report to Congress regarding “Military and Security Developments Involving the People’s Republic of China” warned:

“Taiwan has historically enjoyed military advantages in the context of a cross-Strait conflict, such as technological superiority and the inherent geographic advantages of island defense, but China’s multi-decade military modernization effort has eroded or negated many of these advantages.”

The report highlighted that China still claims authority under its 2005 “Anti-Secession Law” to use “non-peaceful means” if “major incidents entailing Taiwan’s secession” occur or the “possibilities for peaceful reunification” are exhausted.

But with China’s defense budget of $239 billion compared to the island’s $11.3 billion, “Taiwan’s advantages continue to decline as China’s modernization efforts continue.”

To compensate, the report states Taiwan is modifying defense spending for “greater reliance on Taiwan’s Air Force and Navy” to defend against amphibious assault.

The Pentagon in early July declassified results of its annual “Red Dawn” blue [USA] versus red [Russia/China] wargames simulation of conventional weapons invasion of the Baltics or Taiwan. Rand analyst David Ochmanek described the results to Breaking Defense as demonstrating “blue gets its ass handed to it” as red overruns our allies.

Ochmanek commented that big U.S. airbases on land and aircraft carriers on water are big targets for precision-guided long-range missiles. America’s monopoly on smart weapons is over as Russian and Chinese now build similar arsenals — along with long-range sensors, communications networks, and command systems required to aim them.

The Rand Corporation recommended the United States and its allies invest in more long-range offensive and defensive missiles, including Air Force’s JAGM-ER smart bombs and the Navy’s LRASM ship-killer. Rand also recommended a big increase in the type of Army MLRS missile launchers and Stinger missiles that were approved for Taiwan shipment.

Taiwan’s big 767 Airborne Early Warning and Control (AWAC) planes are at high risk of getting shot down early during a China invasion. The 66 Block 70 F-16 Vipers and 144 upgraded F-16s are a game changer because they feature Northrop Grumman’s AN/APG-83 Scalable Agile Beam Radar. SABR is an active electronically scanned array type that allow each pilot to act as a theater AWAC to spot and track dozens of targets, including hard to accurately track low-flying stealth fighters and drones at longer ranges.

The new Block 70s fields an Infrared Search and Track (IRST) sensor system that can scan the airspace ahead of the jet for heat signatures caused by aircraft engines and/or skin friction caused by the stealth aircraft flying through the air. Able to detect and lock up multiple targets, it autonomously engages with telemetry data.

Just prior to the Trump administration’s $10 billion plus Taiwan weapons sales proposal, Military analyst Collin Koh at the S. Rajaratnam School of International Studies at Singapore’s Nanyang Technological University told Irkstone that despite a desire for reunification, China wasn’t ready to invade Taiwan because of inadequate sealift capability and the unproven ability for its Army, Air and Missile Force to work in concert.

The strategic package of U.S. missiles, tanks and air dominance fighters being sent to Taiwan is a disruptive regional event that substantially increases the amount of time and scale of investment for China to present a highly credible amphibious invasion threat.