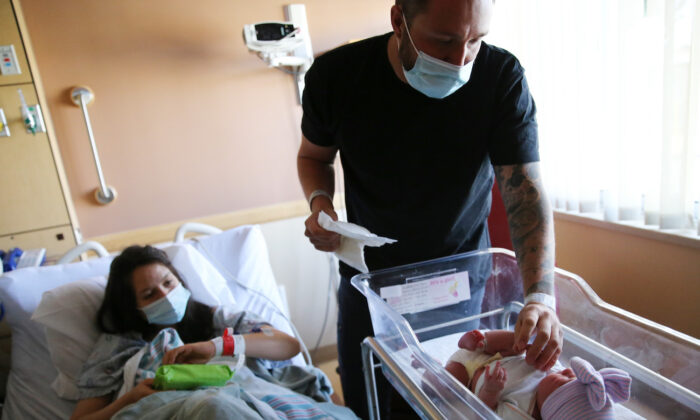 A father prepares to change the diaper of his newborn daughter as his wife keeps watch in the postpartum unit at Providence St. Mary Medical Center in Apple Valley, Calif., on March 30, 2021. (Mario Tama/Getty Images)
US News

The United States in 2020 saw the lowest number of births since 1979 and an ongoing decline in birth rates, according to the U.S. Centers for Disease Control and Prevention (CDC).

The agency estimated some 3.6 million babies were born in the country in 2020—down 4 percent from 2019. This marks the lowest number of births since 42 years ago, as well as the sixth consecutive year that the number of births has declined—down an average of 2 percent per year.

The provisional birthrate report (pdf) published May 5 by the CDC is based on a review of 99.87 percent of birth certificates issued in 2020, processed last year by the CDC’s National Center for Health Statistics as of Feb. 11.

The TFR estimates how many births a hypothetical group of 1,000 women would have over their lifetimes, based on the age-specific birth rate in a given year. The 2020 rate is below the level at which a given generation can exactly replace itself (2,100 births per 1,000 women). The TFR has generally been below replacement since 1971, according to the CDC.

Births have been declining in younger women for years, as many have postponed motherhood and had smaller families. Birth rates for women in their late 30s and in their 40s have been inching up—but not in 2020.

“The fact that you saw declines in births even for older moms is quite striking,” said Brady Hamilton of the CDC, the lead author of the new report.

Data for American Samoa, Guam, and the U.S. Virgin Islands weren’t available as of the report’s release.

The CDC didn’t attribute the overall decline to the COVID-19 pandemic, but experts have predicted that pandemic-led reasons including anxiety will affect the country’s birth rate.

“The recent decline in birth rates reflects both a longer-term downward trend in birth rates that was apparent prior to the pandemic and pandemic-related reduction,” said Lorna Thorpe, director of epidemiology at the Department of Population Health at NYU Langone.

Shanna Swan, an epidemiologist based at Icahn School of Medicine at Mount Sinai in New York City, suggests in a new book published earlier this year that endocrine disruptors may be contributing to a decline in sperm counts over recent decades, thereby playing a role in declining fertility rates across the globe.