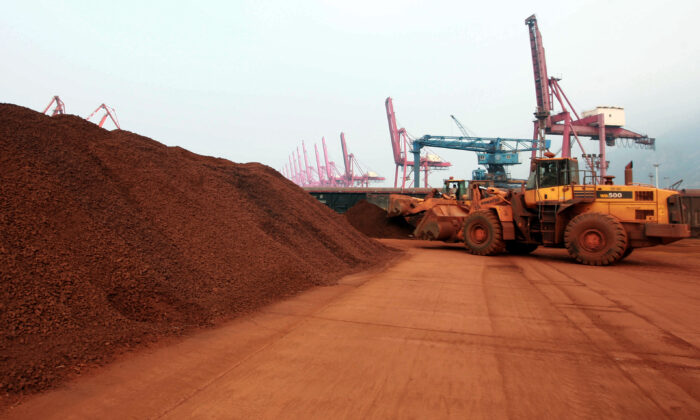 Excavators work at Atlantic Gold Corporation's Touquoy open pit gold mine in Moose River Gold Mines, N.S. on June 6, 2017. A public rally critical of open-pit mining practices is going on today as the mining industry meets in Halifax to promote Nova Scotia's growing gold industry. Demonstrators planned to gather over the lunch hour during the Nova Scotia Gold Show at a hotel at the Halifax airport. THE CANADIAN PRESS/Andrew Vaughan
US-China Relations

The United States will not be able to hold a competitive advantage or protect its national security as long as China maintains its dominance in rare earths production, according to experts.

Washingon must also do a better job of educating professionals for careers in the mining sector, three experts told EpochTV’s “China Insider” program.

The three sources were Chadwick Hagan, an economist; Ann Bridges, author of the book “Rare Mettle”; and Rich Trzupek, a chemist and environmental consultant.

Their call to action came after President Joe Biden’s recent remarks raising concerns about China’s control over a very large part of the global market for rare earth minerals, such as lithium. Speaking from the White House last month, Biden said that “we can’t build a future that’s made in America” if the United States remains dependent on China for the raw materials on which so many components of daily life run, from iPhones to military planes.

Hagan affirmed that rare earth minerals are, like energy, a “strategic industry” and acknowledged that a majority of the mining and exportation of substances like lithium takes place in China, though he also noted that China’s dominance of this market has eased slightly in recent years.

“The good news is that the China market share has gone from about 80 percent in 2014 to a little over 50 percent in 2020,” Hagan said. “But then, China has also recently made some moves to increase that market share and get back up to the leader that they were in 2014,” he added.

In Hagan’s view, Biden’s firm stance on the issue arises from the reality that China’s dominance in this area is a security risk. In the event of a conflict, or a scenario where the United States and other nations impose strict sanctions on China, Beijing could make the importation of precious metals ruinously expensive or not allow the United States to import them at all.

“I don’t know if they would necessarily do that with lithium-ion and rare earth minerals, but we’ve yet to see,” he said.

Growing tensions with China over Taiwan or another issue would not only result in a “tremendous supply-chain issue,” but would also mass panic as consumers long accustomed to buying computers, televisions, and iPhones suddenly could not do so, he said.

In Bridges’s analysis, China has come to achieve such a position of dominance in these industries over the last twenty to thirty years because much of the Western world simply decided it was easier to let China handle the mining and processing of substances like iron ore in Mongolia and other regions. Hence Western nations are no longer competitive or even especially active in this sector.

“For Canada, it’s still about 10 percent of their GDP, Australia does some, but the U.S. really has been getting out of the mining business,” she said.

Meanwhile, the Chinese have led the charge by processing enormous quantities of earth and refining its expertise in the extraction and purification of ore, which they then shape into precious metals. These metals, Bridges said, “provide the components for our 21st-century high-tech lifestyle.”

“I’m talking about smartphones, MRI, medical, resonance imaging, aerospace, defense, batteries. Anything that really contributes to smaller, faster, lighter mobile requires some sort of rare earths. And that is where we are today. China is the dominant producer and manufacturer of components using these minerals,” she said.

At the same time, China does a much better job of turning out graduates with expertise in minerals and mining. According to her estimates, Chinese graduates in the field of geology and manufacturing number some 100,000 per year, while the United States produces only a small fraction of that number.

As China’s large consumer-oriented middle class continues to grow, Bridges said, the producers of these minerals could simply decide that there is no reason they have to continue exporting to United States at such high levels as that their own citizenry needs the products more. Without imports of the minerals, Bridges said, Americans are “kind of stuck,” and some Chinese have given signals that they may undertake just such a shift.

Deposits of rare earth substances exist in many corners of the globe, Bridges said, but that does not mean that achieving independence from China in this area will be easy.

Any move toward rare earth independence on the part of the United States will require a concerted effort to take on environmental lobby groups and thwart regulations that restrict the expansion of mining and processing. It will also be important to educate citizens who believe certain kinds of mining to be environmentally irresponsible.

“The perception, of course, is that is going to be toxic. The reality is that there are new technologies, and new ones coming every day, that are doing it cleaner, better, faster. But if we’re blocked at every step along the way, the investors will just throw up their hands and say, never mind, just let China do it,” she said.

Trzupek concurred with Bridges that it is entirely possible for United States and is allies to achieve independence in this sphere.

“We have the resources, we know where they are, we know how to recover them,” he said. The reason efforts to do so have stalled is due to what Trzupek described as “environmental hysteria.”

While extraction and processing of rare earth minerals do generate waste, environmental activists have latched onto this point, emphasizing the toxicity and lethality of waste. But Trzupek characterizes this as misleading.

“The left’s message on the environmental side is that anything that generates waste is bad and is going to kill babies. In fact, we know how to handle and manage waste, from all types of refining, better than anybody in the world. We can do it more cleanly than anybody,” he said.

The failure to overcome such environmental objections has led to the outsourcing of this production to China, where standards around cleanness and environmental responsibility are markedly lower, he added.

Trzupek said the ideal scenario would be for the U.S. Congress to find the courage to pass legislation favorable to rare earth refining in America. This measure could abolish permitting requirements that prevent the country from realizing its potential. But such broad federal action may be a longshot, he acknowledged.

Another route would be for states to streamline the process for their extractors and refiners. Here is an approach far more tailored to the idiosyncrasies of different states.

“You’re not going to build a rare earth manufacturing plant or refining plant in California, because they are way over the top with their permitting rules. But in some of the red states, I think you probably could,” he said.

“It might take a couple years, you might have to spend a few more dollars than if you did it overseas, but I think it is double in certain states.”