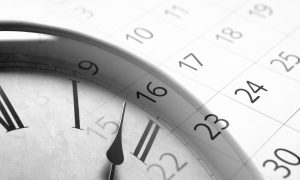 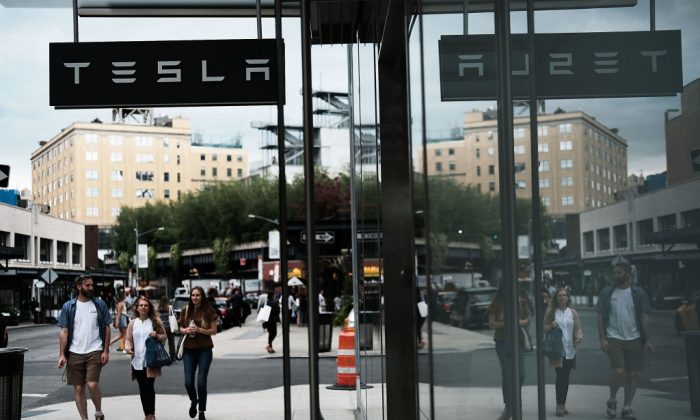 People walk by a Tesla showroom in the Meatpacking district in Manhattan on Jun. 6, 2018 in New York City. ( Spencer Platt/Getty Images)
Companies

SAN FRANCISCO—Tesla Inc. said on Nov. 2 it had received a subpoena from the U.S. Securities and Exchange Commission over forecasts it made about Model 3 production in 2017, a set of targets the electric vehicle company failed to hit on time.

The SEC issued subpoenas over “certain projections that we made for Model 3 production rates during 2017 and other public statements relating to Model 3 production,” Tesla said in a quarterly filing on Nov. 2.  A subpoena can compel a company to turn over materials that the requesting agency wants to review.

The SEC had also issued subpoenas in connection with Chief Executive Elon Musk’s previous statements that he was considering taking the company private, it said.

Both the SEC and U.S. Department of Justice are looking at whether Tesla misled investors about its business.

“To our knowledge, no government agency in any ongoing investigation has concluded that any wrongdoing occurred,” Tesla wrote in its filing.

The company also said on Nov. 2 that 44 percent of its third-quarter net profit was from previously undisclosed regulatory credits.

Investors have been trying to ascertain if the worst is over for the Silicon Valley company amid the fallout from Musk’s short-lived plan in August to take the company private, and determine if Tesla has finally stabilized its rocky Model 3 production and can build the car at a profit.

Jay Dublow, a partner with Pepper Hamilton LLP and former branch chief in the SEC’s enforcement division, said the agency was likely looking at whether Tesla’s projections had been “based on fact or not.”

“It is possible for another SEC enforcement action down the road if it turns out that the projections were purposefully or recklessly made without a basis,” Dublow said.

Tesla is already facing a proposed class-action shareholder lawsuit claiming that the company and top executives made false statements about the readiness of the Model 3 for volume production. The lawsuit cites repeated promises in 2017 that Tesla was “on track” to build 5,000 Model 3s per week by the end of that year at its factory in Fremont, Calif. Tesla finally met that target in June of this year.

Tesla has denied the claims, saying it disclosed production bottlenecks once identified, and pointing to Musk’s public statements that the company was undergoing a period of “production hell” in 2017.

A Tesla spokesperson told Reuters recently that the company had received a voluntary request from the Department of Justice for documents related to Model 3 production forecasts, but had not received a subpoena.

Tesla has weathered a rocky few months in the wake of Musk’s tweets that he had “funding secured” for a deal, later scuttled, to take Tesla private. Musk and Tesla settled with the SEC in September after the agency sued for fraud.

The settlement required Tesla and Musk to pay a fine of $20 million each and for Musk to give up his chairman role for three years.

The company said then it had booked $52 million in “zero emission vehicle” credit sales. It did not say at the time that it had gained another $137 million in regulatory credits, which contributed to nearly half of the profit.

Tesla also said in its quarterly filing that it planned to start building about 3,000 Model 3 vehicles per week in Shanghai in the initial phase of its Gigafactory 3, to reduce the impact of tariffs.

Model S and Model X sales in China will likely continue to be hurt by recently increased tariffs imposed by the Chinese government on U.S.-manufactured vehicles, it said.