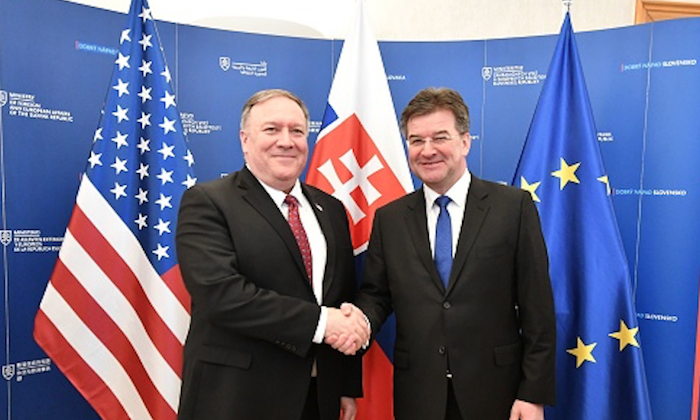 Europe and the US need each other: 'We are stronger together'
By Milan Kajinek

US Secretary of State Mike Pompeo visited Slovakia on Feb. 12 during his five-nation European tour.

During his visit, Pompeo said he would be raising American concerns about China and Russia’s growing influence in Central Europe.

Pompeo met with the country’s top leaders and praised the mutual military and economic cooperation between Slovakia and the United States.

Pompeo said the United States appreciated Slovakia’s commitment to increase defense spending to two percent of its GDP by 2024.

Slovakia has already purchased U.S. military helicopters as part of a massive effort to modernize its army. Slovakia signed an agreement to purchase the 14 of the most advanced F-16 fighter jets last year.

“The visit of Pompeo to Bratislava celebrates 30 years of democracy and attests to the continued friendship between the U.S. and Slovakia. Transatlantic unity is our greatest weapon against the challenges ahead. We are stronger together,” wrote Slovakian foreign affairs minister Miroslav Lajcak on Twitter on Feb. 12 during a visit to the Gate of the Freedom in Bratislava, which is a memorial commemorating the occupation of former Czechoslovakia by the socialist Soviet Union.

Visit of @SecPompeo to Bratislava celebrates 30 yrs of democracy & attests the continued friendship between US & Slovakia. Transatlantic unity is our greatest weapon against challenges ahead. We are stronger together, 30 years ago and today. 🇸🇰🇺🇸 #CourageToBeFree pic.twitter.com/OctfgSmT9U

Pompeo recalled in front of the monument the time when he patrolled the border of Czechoslovakia as a young soldier in the 1980s. “I’ve seen with my own eyes how bad communism can be,” he said. “I’ve seen what communism can do, and I don’t want it to happen again.

“It’s an honor to be here. Memorials like this ensure that we don’t forget what’s at stake.”

Pompeo also said that it is necessary to oppose attempts to undermine democracy and freedom.

“We are aware of Russia’s aggressive role in this region. We can see it very clearly in Ukraine, where the illegal annexation continues,” Pompeo said, adding that, “The United States is ready to be a friend, partner, and ally of Slovakia in the coming decades as well.”

Slovak President Andrej Kiska wrote on Facebook:”In the discussion with Mike Pompeo, we have agreed that Europe and the U.S. need each other.”

Kiska also highlighted the ongoing trade cooperation between both countries. “The U.S. is one of the most important business partners for Slovakia, with U.S. companies employing almost 50,000 Slovaks,” he said.

The last visit by a U.S. foreign minister to Slovakia was 20 years ago.

It was U.S. Secretary of State Madeleine Albright who was herself born in former Czechoslovakia. Czechoslovakia was separated in 1992 into the Czech Republic and Slovakia.

Albright’s family hid from the Nazis in London during the Second World War and then emigrated to the United States under the pressures from the spreading of communism in Europe.

Albright studied international relations in the USA and became the first woman ever to head the U.S. Department of State in 1997.