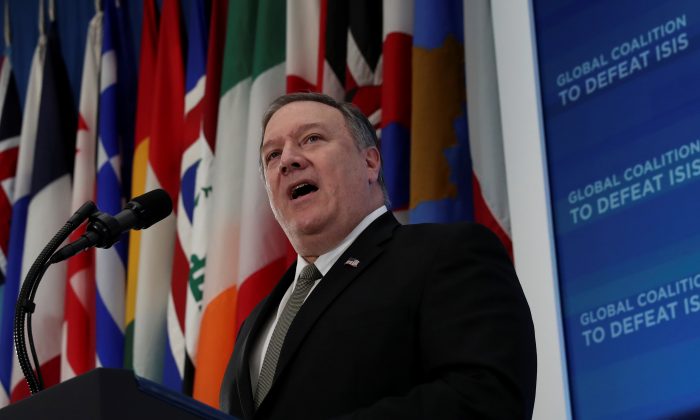 U.S. Secretary of State Mike Pompeo delivers remarks to foreign ministers from the Global Coalition to Defeat ISIS at the State Department in Washington, U.S. on Feb. 6, 2019. (Leah Millis/Reuters)
Politics

WASHINGTON—U.S. Secretary of State Mike Pompeo will express concerns about the growing presence of China’s Huawei Technologies in central Europe when he visits Hungary next week, a senior administration official said on Feb. 8.

During his visits to Hungary and Slovakia, Pompeo will also discuss ways to bolster security relationships with both countries, including clinching deals on defense cooperation, the official told reporters.

“In Hungary, the Secretary will give particular focus to the role of China in central Europe, and express our concerns about the growing presence of Huawei in Hungary,” the official said.d

He will “urge regional leaders to heed the warnings of countries from Asia-Pacific who have found themselves in difficult straits as a result of working too closely with the Chinese,” said the official, who briefed reporters on the upcoming visit

Huawei Technologies plans to create a European logistics center in Hungary and boost production capacity in the central European country this year.

The U.S. is trying to persuade other governments to avoid Huawei, which is under scrutiny from Western intelligence agencies for its perceived ties to the Chinese regime and the possibility its equipment could be used for espionage.

The United States has already largely barred Huawei from supplying its government and contractors, while Australia has banned the company from supplying equipment for a 5G mobile network.

Huawei, which has repeatedly denied engaging in intelligence work for any government, is one of several Chinese tech companies that have come under U.S. government scrutiny.

The senior official said the United States was particularly worried about Huawei’s influence in small eastern and central European countries where corruption was a problem and it was easy to penetrate state systems, the official said.

“Of course, we see (Huawei’s presence) being problematic across the board, but what sets central and Eastern Europe apart is you have a large number of mostly small and mid-sized states, many of whom have a higher propensity to corruption,” the official added.

He said China “sees relatively small countries with a recent history of communism, with significant pathways of corruption, that lend themselves more readily to state penetration in key sectors, and then they have a springboard to operate within EU fora.”