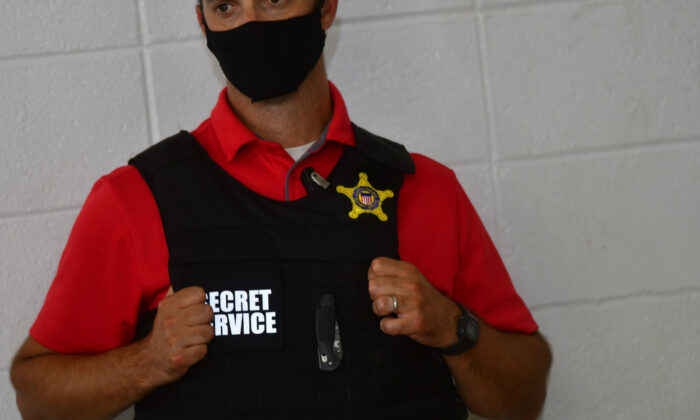 A member of the U.S. Secret Service on duty in Wilmington, Delaware on July 28, 2020. (Mark Makela/Getty Images)
Crime and Incidents

In the statement, the Secret Service added there was potentially fraudulent activity nearing $100 billion related to the relief funds last year.

The $100 billion figure is based on the aggregate of two previous reports by the Inspector General that have been public for months and looked at issues in 2020. There is no new research, data, or analysis of fraud, the statement noted. Presumably, that figure is now higher.

Most of the loss has come from unemployment benefits improperly disbursed, said the statement.

“The exploitation of pandemic-related relief is an investigative priority for the Secret Service and its partners,” it added.

The statement also announced the appointment of Assistant Special Agent in Charge, Roy Dotson, as the service’s coordinator of national pandemic fraud recovery.

“That’s a combination of pandemic benefits and all the other benefits programs too. Every state has been hit, some harder than others,” he said.

“The Secret Service is hitting the ground running, trying to recover everything we can, including funds stolen from both federal and state programs.”

In his new role, Dotson will organize investigation efforts with financial institutions, money service businesses, and federal agencies into tracking and recovering the stolen funds, which include Small Business Administration (SBA) loans, unemployment insurance, and other grant programs.

Fraud related to personal protective equipment (PPE) was of primary concern to law enforcement, including the Secret Service, early in the pandemic, the statement said, adding that the release of federal funding through the Coronavirus Aid, Relief and Economic Security (CARES) Act attracted the “attention of individuals and organized criminal networks worldwide.”

Many people associate the Secret Service with protecting key political personalities in the country, including the president. But, the department also handles investigations of financial crimes.

The amount of fraud could be overstated as the figures include mistaken payments to people who aren’t eligible for the benefits.

According to a November report by the Small Business Administration’s inspector general, the agency improperly distributed over $3.1 billion loans and more than $550 million in grants to unsuitable recipients owing to a lack of adequate oversight controls.

Meanwhile, the Justice Department said earlier in the month that it has prosecuted more than 150 defendants in over 95 criminal cases involved in Paycheck Protection Program (PPP) schemes. The DOJ has, till now, seized over $75 million in cash proceeds, along with real estate and luxury items, from PPP fraud.

In November, Lee Price, a Texas man, was sentenced to over 9 years in prison for stealing $1.6 million from the PPP program. Price acquired the funds by falsifying the number of employees and payroll expenses on behalf of three different business entities.

He submitted bogus tax records to two different relief loan lenders, and after acquiring the funds, spent it on a Lamborghini Urus, a Ford F-350 truck, a Rolex watch, and to pay off a loan on a residential property, among other purchases. The department has seized more than $700,000 of the stolen funds.

PPP offered low-interest forgivable loans to small businesses that were most affected during the pandemic-related restrictions and lockdowns.

A combined amount of $3.4 trillion has been dispersed as part of all pandemic relief programs.