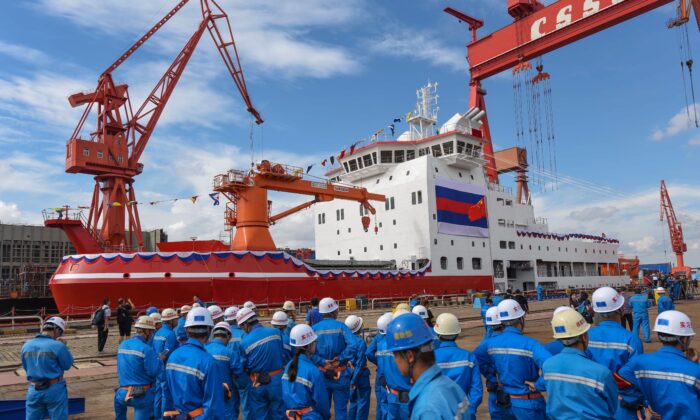 China's icebreaker, Xuelong 2, at a launch ceremony at a shipyard in Shanghai, China on Sept. 10, 2018. (STR/AFP via Getty Images)
By Chriss Street

The U.S. Navy’s Second Fleet that was disbanded during the Obama years has been reactivated to full-operational capability to meet challenges, such as China’s increasing activity in the Arctic.

The Navy’s Second Fleet was responsible for protecting American interests from the northernmost point of the Earth to the Caribbean, with about 126 ships, 4,500 aircraft, and 90,000 sailors. The fleet was targeted by the Obama administration as a relic of the U.S.-Soviet Cold War on Aug. 10, 2010, and then deactivated in 2011.

The Chinese Communist Party (CCP) in mid-October 2010 began debating plans to gain “new territories” in the Arctic as a focus for its Twelfth Five Year Plan published in 2011. Mentions of Arctic initiatives and China as a “near-Arctic state” began appearing in official state-planning documents in 2015, culminating in the region being included by Chinese leader Xi Jinping in his Jan. 25, 2018 “One Belt, One Road” (OBOR, also known as Belt and Road Initiative) update speech that embraced a Chinese vision of a “shared future” along the “Polar Silk Road.”

China’s Polar Silk Road gambit that involves up to 21 million sq. km of the Earth’s most unknown and underdeveloped maritime regions has set off alarm bells over national security concerns for many northern nations. Niklas Granholm of Sweden’s Defense Research Agency warned, “China’s increasing activity in the Arctic has been met with concern that it may lead to a significant redrawing of the region’s geopolitical map.”

The Trump administration began reestablishing the Second Fleet on July 1, 2018 with just 11 officers and four enlisted personnel. But by September 2019, the Second Fleet had grown to nearly 30 ships and 120 aircraft.

One of the Second Fleet’s prime missions is dealing with Chinese and Russian technology advances that have led to “an undersea environment characterized by ubiquitous passive sensors, quiet submarines, supersonic and hypersonic anti-ship missiles (ASM), smart mines, and the increasing use of paramilitary forces,” such as China’s “Little Blue Men” that regularly harass shipping in the South China Sea.

Commander of U.S. Naval Forces Europe and Africa Adm. James Foggo recently told reporters that global submarine competition is heating up: “This has been one of the busiest years that I can remember, and I’ve been doing this since 1983,” he said. “… Russia has continued to put resources into their undersea domain. It’s an asymmetric way of challenging the West and NATO alliance and actually they’ve done quite well.”

Coinciding with the Second Fleet achieving full operational capability, the non-partisan Center for the Strategic and Budgetary Assessment (CBSA) issued a report titled: ‘Taking Back the Seas, Transforming the U.S. Surface Fleet for Decision-Centric Warfare.” The CBSA argues that the U.S. Navy must become more agile and cost effective, because it is still weighted toward large combatants that are too expensive and manpower-intensive to achieve the numbers needed for distributed operations “during combat against a great power like China.”