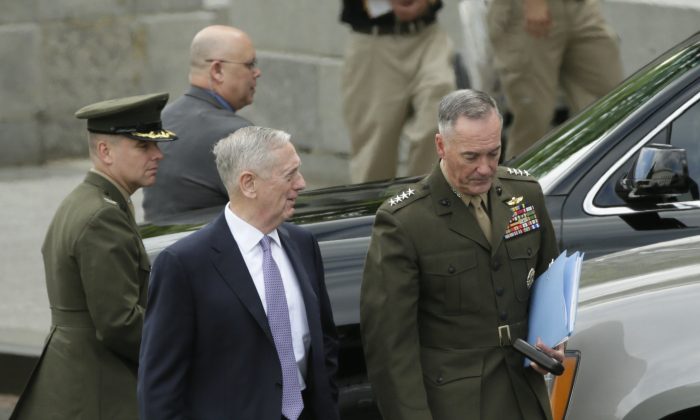 WASHINGTON—The Trump administration said on Wednesday it aimed to push North Korea into dismantling its nuclear and missile programs through tougher international sanctions and diplomatic pressure, and remained open to negotiations to bring this about.

The U.S. stance, which appeared to signal a willingness to exhaust non-military options in spite of repeated warnings that “all options are on the table,” came in a statement following an unusual White House-hosted briefing for the entire Senate.

Trump has vowed to prevent North Korea from being able to hit the United States with a nuclear missile, a capability experts say it could have some time after 2020.

“The President’s approach aims to pressure North Korea into dismantling its nuclear, ballistic missile, and proliferation programs by tightening economic sanctions and pursuing diplomatic measures with our allies and regional partners,” it said.

“The United States seeks stability and the peaceful denuclearization of the Korean peninsula. We remain open to negotiations towards that goal. However, we remain prepared to defend ourselves and our allies.”

While the administration has said repeatedly that military strikes remain an option, officials have stressed tougher sanctions given the risks of massive North Korean retaliation.

“It was a sobering briefing in which it was clear just how much thought and planning was going into preparing military options, if called for, and a diplomatic strategy that strikes me as clear-eyed and well proportioned,” Coons said.

Tillerson will chair a ministerial meeting of the U.N. Security Council on Friday that is expected to discuss tougher steps, which U.S. officials say could include an oil embargo, banning North Korea’s airline, intercepting cargo ships and punishing Chinese and other foreign banks doing business with Pyongyang.

However to be effective, such steps will require the full support of China, North Korea’s neighbor and only ally.

The Chinese regime objects to North Korea’s weapons development, and has called repeatedly for a return to international negotiations, but U.S. officials have said Washington sees no value in returning to talks until Pyongyang shows it is serious about denuclearization.

Earlier on Wednesday, North Korea’s foreign ministry called U.S. attempts to make Pyongyang give up its nuclear weapons through military threats and sanctions “a wild dream” and like “sweeping the sea with a broom”.

The administration is hoping for greater Chinese cooperation after a summit between Chinese leader Xi Jinping and Trump last month, and a senior White House official said Beijing now appeared to acknowledge North Korea as a threat to the Chinese regime too.

“You have seen some early indications of China doing a better job enforcing existing U.N. sanctions on North Korea,” the official said, adding that there had also been a clear effort to communicate to North Korea in the Chinese press “that its nuclear tests, missile tests, the existence of these programs can’t be tolerated.”

However the Chinese regime has been angered by U.S. deployment of the Terminal High Altitude Area Defense (THAAD) missile defense system in South Korea, complaining that its radar can see deep into China and undermines its security.

The top U.S. commander in the Pacific Admiral Harry Harris told Congress on Wednesday the system would be operational “in coming days” and suggested Beijing should focus on trying to influence North Korea rather than worrying about a purely defensive system.

Harris said he believed Pyongyang’s threats needed to be taken seriously and the United States may also need to strengthen missile defenses in Hawaii.

He said these were sufficient for now but could one day be overwhelmed, and suggested studying stationing new radar there as well as interceptors to knock out any incoming North Korean missiles.

“I don’t share your confidence that North Korea is not going to attack either South Korea, or Japan, or the United States … once they have the capability,” Harris told one lawmaker.

U.S. officials have warned that a conflict with North Korea could have a devastating effect on ally South Korea and U.S. troops based there, a point Pyongyang underscored by a big live-fire exercise on Tuesday to mark the foundation of its military. Harris conceded that North Korean retaliation to any U.S. strikes could cause many casualties in South Korea, but added that there was the risk “of a lot more Koreans and Japanese and Americans dying if North Korea achieves its nuclear aims and does what (North Korean leader Kim Jong Un) has said it’s going to do.”

North Korea has vowed to strike the United States and its Asian allies at the first sign of any attack on its territory.

In a show of force, the United States is sending the USS Carl Vinson aircraft carrier group to waters off the Korean peninsula, where it will join the USS Michigan, a nuclear submarine that docked in South Korea on Tuesday. South Korea’s navy has said it will hold drills with the U.S. strike group.

Harris said the carrier was in the Philippine Sea, within two hours’ striking distance of North Korea if need be.

The frontrunner in South Korea’s May 9 presidential election has called for a delay in THAAD deployment, saying the new administration should make a decision after gathering public opinion and more talks with Washington.