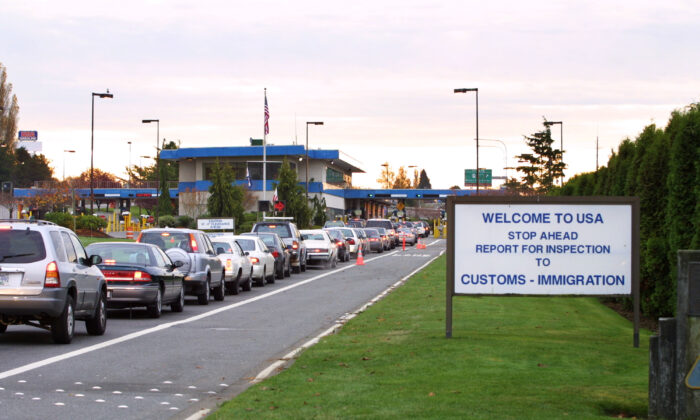 Vehicles line up to enter the United States at the Peace Arch border crossing between Blaine, Washington and White Rock, British Columbia in a file photograph. (Jeff Vinnick/Getty Images)
US News

Customs and Border Protection (CBP) stated that reports that border agents are detaining Iranians and Iranian Americans at the U.S.–Canada border aren’t accurate.

“Social media posts that CBP is detaining Iranian-Americans and refusing their entry into the U.S. because of their country of origin are false,” the agency wrote on Twitter.

The Muslim civil rights group Council on American-Islamic Relations made the claims, along with activists such as Iranian American fashion blogger and activist Hoda Katebi.

Social media posts that CBP is detaining Iranian-Americans and refusing their entry into the U.S. because of their country of origin are false. Reports that DHS/CBP has issued a related directive are also false.

Katebi wrote on Twitter that border agents had been “ordered to detain” Iranians entering the United States who were “deemed potentially suspicious … regardless of citizenship status.” She claimed that more than 60 Iranians had been held at the U.S.–Canada border for more than 11 hours on Jan. 5.

She later challenged the CBP’s statement, stating: “These accounts are verified by journalists on both sides of the border. We’ve seen photo/video documentation & more stories of prolonged detention & interrogation of U.S. citizens of Iranian heritage at this border.”

Neither she nor other activists provided documentation of the claims.

The Council on American-Islamic Relations’ Washington chapter stated in a press release that more than 60 Iranians and Iranian Americans were “detained at length and questioned” at the Peace Arch Border Crossing in Blaine, Washington.

“Many more were reportedly refused entry to the United States due to a lack of capacity for CBP to detain them,” the group stated.

The group said the Iranian Americans had attended an Iranian pop concert in Vancouver, Canada, over the weekend. It cited one person, a 24-year-old woman named Crystal, whose last name wasn’t listed, who said, “We kept asking why we were being detained and asked questions that had nothing to do with our reason for traveling and were told, ‘I’m sorry this is just the wrong time for you guys.'”

In a statement, Washington state Lt. Gov. Cyrus Habib said he was “deeply concerned” about reports his office was receiving about Iranian Americans “being held, sometimes for 10 hours or longer, at the Canada-Washington border.”

“My office is working as quickly as possible to gather information and to direct those being impacted to resources,” he said.

My statement on reports of Iranian Americans being held at the WA-Canada border: pic.twitter.com/xDmZruiVDX

The Department of Homeland Security emphasized Iran in an update to its National Terrorism Advisory System on Jan. 4 after an Iran-backed terror group killed a U.S. contractor and hit the U.S. Embassy in Baghdad, triggering reprisals from the United States, including the killing of Iranian Gen. Qassem Soleimani.

“At this time we have no information indicating a specific, credible threat to the Homeland,” the department stated (pdf).

“Iran and its partners, such as Hizbollah, have demonstrated the intent and capability to conduct operations in the United States. Previous homeland-based plots have included, among other things, scouting and planning against infrastructure targets and cyber enabled attacks against a range of U.S.-based targets.

“Iran is capable, at a minimum, of carrying out attacks with temporary disruptive effects against critical infrastructure in the United States. Homegrown violent extremists could capitalize on the heightened tensions to launch individual attacks.”