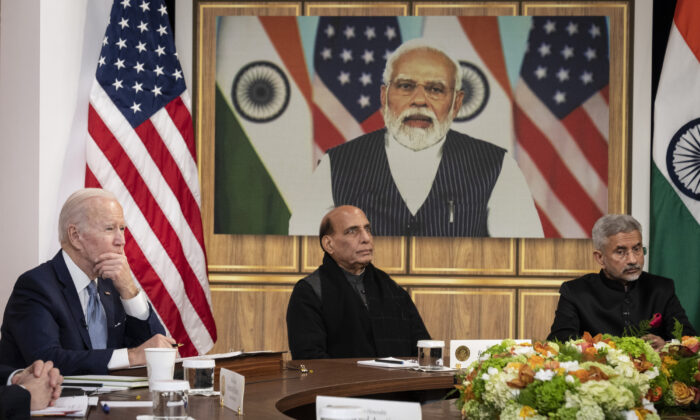 The United States says it did not ask India for any specific action regarding Russian energy imports, saying that it supports India making “its own judgments” on how to approach the Russia–Ukraine crisis, the White House said Monday.

President Joe Biden and India’s Prime Minister Narendra Modi had a “very candid conversation” on the Russia–Ukraine crisis at a virtual summit on Monday, according to a senior administration official, who described the hour-long meeting as “warm and productive.”

“We haven’t asked India to do anything in particular; we’re having a very open conversation.  We know that not all countries will be able to do what we’ve done,” the official said.

India has purchased at least 13 million barrels of discounted Russian crude oil since Moscow invaded Ukraine in late February. Washington said it recognized that the imports make up only 1 to 2 percent of India’s total energy imports.

“We’ve been very clear that we’ve been able to ban oil and [liquefied natural gas] and coal imports from Russia, but other countries have to make their own choices,” the official said.

“That said, we don’t think India should accelerate or increase imports of Russian energy. And the U.S. is ready to support India, remain in a conversation with India about its diversification of imports,” the official added.

During the meeting, both leaders also reaffirmed their commitment to strengthening military cooperation and diplomatic ties.

“We know that India has concerns about the links between Russia and China. India is facing a very tense situation along the Line of Actual Control (LAC). And when India sees the tight links between China and Russia, that’s obviously going to impact their thinking,” the official added.

The LAC is a demarcation line that separates Indian and Chinese-controlled territory. Tensions flared during an incident on the LAC in April 2020.

While India has repeatedly called for an end to violence in Ukraine and condemned the mass killing of civilians in Bucha, the country has abstained from various U.N. resolutions on the war as it balances its diplomatic ties with Russia and the West.

On March 22, Biden said that India has been “somewhat shaky” on imposing sanctions against Moscow for its invasion of Ukraine.

Washington and India have also agreed to launch “new supply chain cooperation measures that will let us swiftly support each others’ priorities in defense requirements,” he added.

Cybersecurity and information-sharing were also identified as areas of cooperation between the Indo–Pacific allies.

“We’re doing all this because the United States supports India as a defense industry leader in the Indo–Pacific and a net provider of security in the region. And we all understand the challenges that we face there,” Austin said.

“The People’s Republic of China is seeking to refashion the region and the international system more broadly in ways that serve its interests. And so I’m pleased that we’ve identified new opportunities to extend the operational reach of our militaries and to coordinate more closely together across the expanse of the Indo–Pacific,” he added.