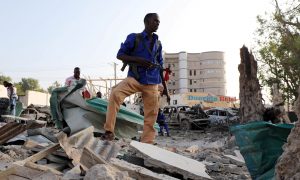 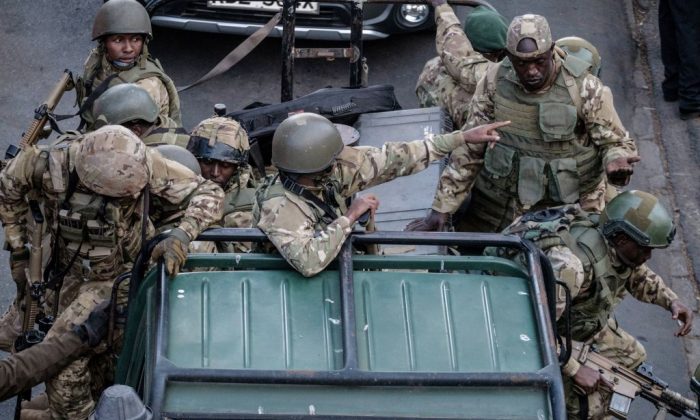 Kenyan security forces get out of a car after a blast followed by a gun battle rocked a upmarket hotel complex in Nairobi on Jan. 15, 2019. (YASUYOSHI CHIBA/AFP/Getty Images)
US News

US Says Air Strike Kills 52 Militants Who Attacked Somali Base

The U.S. military said it launched an air strike in Somalia on Jan. 19, killing 52 Islamists who had attacked a Somali military base earlier in the day.

The air strike targeted al Shabaab fighters who had rammed into the military base near Jilib, 370 km (230 miles) southwest of the capital Mogadishu using a suicide car bomb, military officials in the state of Jubbaland told Reuters.

Pictures taken at the scene after the strike and seen by Reuters showed a large burned-out flatbed truck surrounded by charred bodies. Other photos appeared to show a car rigged with explosives that hadn’t detonated at the Bar Sanguni forward operating base, which had come under al Shabaab attack.

While Al Shabaab lost control of most Somali cities and towns after African Union and Somali troops pushed the hardline Islamists out of Mogadishu in 2011, their insurgency is still active.

On Jan. 18, they ambushed an Ethiopian military convoy 80 km (50 miles) north of Baidoa in central Somalia. Al Shabaab said it killed “more than 57 Ethiopian invaders.” Ethiopia’s Ministry of Defence said it used helicopter gunships and “successfully repulsed the attack” on the convoy which was able to continue on to its destination, Baidoa.

The U.S. military said no civilians were believed to have been killed or injured in the Jan. 19 strike.

Al Shabaab retains a strong presence in parts of southern and central Somalia, and the U.S. military has stepped up air strikes over the last year.

Reporting by Feisal Omar in Mogadishu, Alexandra Zavis and Katharine Houreld in Nairobi.