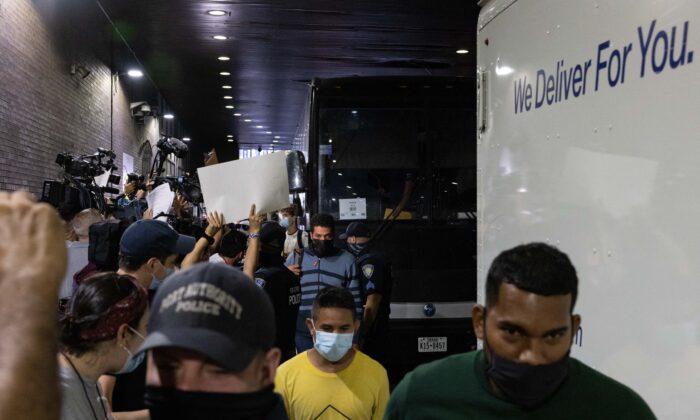 An investigation conducted by the Immigration Reform Law Institute (IRLI) has found that sanctuary states in the United States are dishing out millions of dollars’ worth of taxpayer money to illegal immigrants.

Illegal aliens are ineligible for federal unemployment benefits, with the Federal Unemployment Tax Act requiring states to take precautions to prohibit such people from filing for these claims. However, the three sanctuary jurisdictions of the District of Columbia, Colorado, and New York have handed out a combined $2.715 billion in unemployment benefits to illegal aliens, the Oct. 25 investigation report reveals (pdf). The annual cost to taxpayers will be “much higher” if anti-border activists have their way, the report warns.

“If, for example, New York revamped their program and made it permanent; the D.C. City Council enlarged its fund; and California successfully implemented its own proposal, American taxpayers would be faced with an utterly staggering price tag of roughly $4,350,000,000 every year—to reward illegal aliens for violating our immigration laws and winding up unemployed on American soil,” the report says.

In December 2020, legislation passed in Colorado granted $5 million for the Left Behind Workers Fund intended for illegal immigrants.

Last year, the District of Columbia disbursed $15 million to “excluded workers,” which mostly consisted of the illegal alien population.

In California, lawmakers introduced the Excluded Workers Pilot Program, which if signed into law will disburse $300 per week to illegal aliens in the state for 20 weeks.

According to an estimate by the Federation for American Immigration Reform, a sister organization of IRLI, illegal aliens cost America more than $116 billion annually. Providing unemployment benefits to illegal immigrants will just “incentivize further immigration violations,” the report states.

A report published by the IRLI in August deemed New York City to be “America’s most dangerous sanctuary community.” Los Angeles, Chicago, Philadelphia, and San Francisco made up the remaining top five.

“These communities have earned their places on this list because of incredibly poor leadership at the city, county, and state levels,” Dale L. Wilcox, IRLI’s executive director and general counsel, said in a statement.

“Data overwhelmingly shows that sanctuary policies lead to more crime, fear, and death. The leaders of these communities should not escape accountability for the damage they have caused. Their residents deserve much more.”

Funds are being distributed to illegal aliens at a time when American citizens are struggling with high inflation. The annual inflation rate has remained above 7.5 percent for every month this year, with elevated prices forcing American households to make tough budgetary decisions.

A recent survey by the Nationwide Retirement Institute found that 18 percent of Americans have avoided buying groceries or chosen to skip meals in the past 12 months due to high inflation.

Another survey by LendingClub found that 63 percent of American citizens were living paycheck to paycheck as of September. Of these people, 66 percent have reduced spending and 49 percent have changed their shopping preferences.