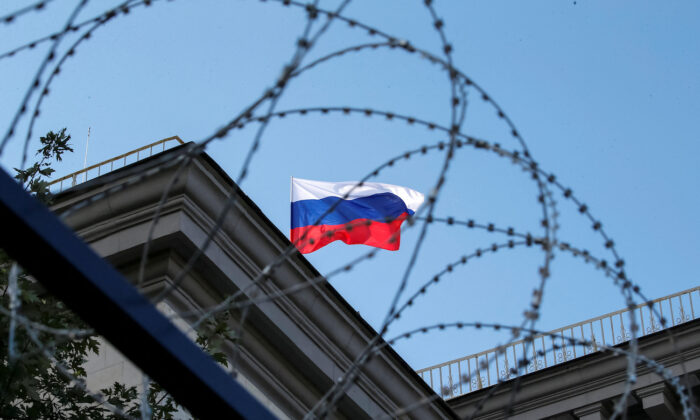 A Russian national flag is seen at the roof of the Russian embassy in Kyiv, Ukraine, on Sept. 18, 2016. (Gleb Garanich/Reuters)
World

The U.S. government on Thursday sanctioned four Ukrainian officials it accuses of being involved in activities backed by the Russian government to destabilize Ukraine.

It comes amid the United States warning of further action if Russia invades Ukraine. Russia has massed some 100,000 troops on its borders with Ukraine, but denies it is planning an attack. Russian officials are demanding written guarantees that NATO will give up any military activity in Eastern Europe and Ukraine, but members of the alliance have refused to issue such promises.

All four have been involved in disinformation efforts by Russia’s federal security service (FSB) to set the pretext for a potential further invasion of Ukraine, the U.S. government alleges.

“Russia has used hybrid tactics, including disinformation and other influence campaigns, to destabilize Ukraine for years,” Secretary of State Antony Blinken said in a statement. “In 2020, Kremlin officials launched a comprehensive information operation plan designed in part to degrade the ability of the Ukrainian state to independently function; the individuals designated today played key roles in that campaign.”

Kozak, who controls several news channels in Ukraine, allegedly amplified false narratives to denigrate Ukrainian President Volodymyr Zelenskyy’s inner circle and falsely accused him of mismanagement, according to the Treasury.

Kozak and Voloshyn are members of the political party of Viktor Medvedchuk, the Kremlin’s most prominent ally in Ukraine. Medvedchuk was put under house arrest last year in a treason case. Prior to that, the United States sanctioned Medvedchuk in 2014 for his role in undermining Ukrainian sovereignty.

Sivkovich, who previously served as Ukraine’s deputy secretary for national security and defense councils, is accused of having worked in 2021 with Russian intelligence activists in influence operations to support Ukraine to officially cede Crimea to Russia in exchange for a drawdown of Russian-backed forces. Russian troops seized the Crimea region from Ukraine in 2014 and then annexed the Black Sea peninsula.

Oliynyk, who fled Ukraine to seek refuge in Russia, last year allegedly worked with the FSB to gather information about Ukrainian critical infrastructure.

“The United States is taking action to expose and counter Russia’s dangerous and threatening campaign of influence and disinformation in Ukraine,” Deputy Secretary of the Treasury Wally Adeyemo said in a statement. “We are committed to taking steps to hold Russia accountable for their destabilizing actions.”

The sanctions come less than 24 hours after President Joe Biden said he believed that Russia “will move in” on Ukraine. Biden also warned Russian President Vladimir Putin that Russia would pay a “dear price” in lives lost and a possible restriction in access to the global banking system if it does.

Republicans and Ukrainian officials criticized Biden’s comments saying he may have invited a limited Russian invasion by telling reporters on Wednesday that the United States would react with a measured response in the case of a “minor incursion.” Administration officials immediately tried to clarify his remarks, and Biden himself did so on Thursday.

“I’ve been absolutely clear with President Putin,” Biden said Thursday. “He has no misunderstanding: any, any assembled Russian units move across the Ukrainian border, that is an invasion.”

Shortly before the U.S. sanctions were announced, Zelenskyy said on Twitter, “We want to remind the great powers that there are no minor incursions and small nations. Just as there are no minor casualties and little grief from the loss of loved ones.”

Biden said Wednesday his team is considering possible sanctions that would target the Russian banking system to restrict its ability “to deal in dollars.”

Sen. Jeanne Shaheen, a New Hampshire Democrat who co-led a bipartisan congressional delegation to Ukraine last weekend, told reporters Thursday she understood the administration was still analyzing what the impact would be on other countries if Russia were banned from SWIFT, a banking system that handles the flow of money around the world.

The White House last week warned that Russia has stationed operatives in and around Ukraine possibly to create a pretext for an invasion.