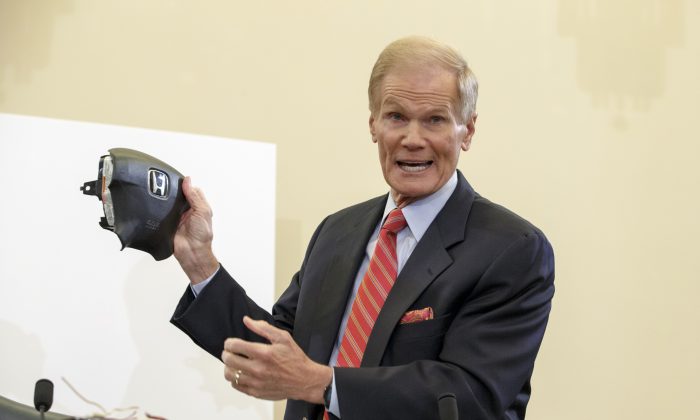 Senate Commerce Committee member Sen. Bill Nelson (D-Fla.) displays the parts and function of a defective airbag made by Takata of Japan that has been linked to multiple deaths and injuries in cars driven in the US, Thursday, Nov. 20, 2014, during the committee's hearing on Capitol Hill in Washington. (AP Photo/J. Scott Applewhite)
Autos

DETROIT—A dispute between U.S. safety regulators and air bag maker Takata Corp. escalated Wednesday when the government threatened fines and legal action if the company fails to admit that driver’s air bag inflators are defective and to agree to a nationwide recall.

In a letter to Takata’s Washington office, the National Highway Traffic Safety Administration gave the Japanese company until Tuesday to file paperwork declaring a defect and expand the recall from high-humidity states to the full nation.

The company’s air bags have been blamed for at least five deaths and multiple injuries worldwide. They can inflate with too much force, blowing apart a mental canister and spewing shrapnel.

The letter is the first step in a legal process to compel a nationwide recall. To do so, the agencymust determine that there’s a safety defect and hold a public hearing. Then it can go to court. It can also fine the company up to $7,000 per vehicle with defective inflators, and NHTSA says there are millions on the road today.

“Be assured that we will use all of our authority and resources,” Transportation Secretary Anthony Foxx said in a statement.

Takata has maintained that the air bag problems are caused by prolonged exposure to airborne moisture, and that there’s no need for a national recall. Moisture can make the chemical propellant in the air bags burn too fast. Boundaries of the recall zone vary by manufacturer, but generally it covers Gulf Coast states, Hawaii, Puerto Rico and some U.S. territories.

A company spokesman was working on a response Wednesday.

In the letter, NHTSA says Takata hasn’t safety defect papers as demanded by the agency Nov. 18. The company, the letter said, has not explained why two driver’s side air bag inflators ruptured outside the high-humidity areas.

“Despite the severe consequences of air bag ruptures and mounting data demonstrating a safety defect, Takata responded that it did not agree with NHTSA’s basis for a nationwide recall,” the letter stated.

The agency cites inflator ruptures that injured drivers in California and North Carolina as justification for the national recall.

About 8 million vehicles from 10 manufacturers have been recalled in the U.S., and 14 million worldwide. The vehicles have Takata driver or passenger air bags, or both. So far the government is not seeking a national recall of passenger air bags, saying that data doesn’t support it outside of high-humidity areas.

NHTSA also is moving to get automakers to agree to minimum boundaries for the passenger air bag recalls in high-humidity areas with average dew points of 60 degrees or higher.

Its first target was Chrysler. In a letter Tuesday, NHTSA told the company to expand its recall and accused it of moving too slowly to notify car owners. The company says it’s working on a response.

Chrysler is recalling more than 371,000 older vehicles in Florida, Hawaii, Puerto Rico and the U.S. Virgin Islands. But NHTSA says the passenger air bags can malfunction in a wider area that adds southern Georgia; areas along the Gulf Coast in Alabama, Louisiana, Mississippi and Texas; and Guam, Saipan and American Samoa.

Other automakers with smaller recall zones will be asked to take similar action.

Chrysler has said it won’t notify owners until Dec. 19. But NHTSA is demanding notification start no later than Monday.

Lawmakers have said there are 100 million cars and trucks worldwide with Takata air bags, and more than 30 million in the U.S.

Recently NHTSA has gotten tough with Takata on the air bag issue, but lawmakers have criticized the agency for a slow and haphazard response.