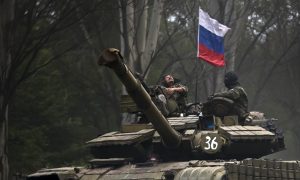 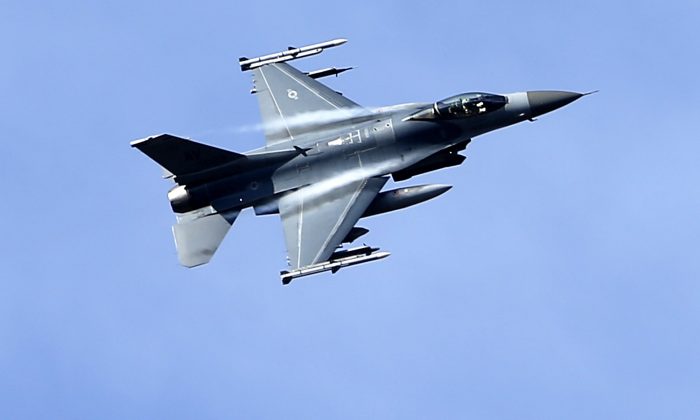 AMARI AIR BASE, Estonia—Russia is so close that the F-16 fighter pilots can see it on the horizon as they swoop down over a training range in Estonia in the biggest ever show of U.S. air power in the Baltic countries.

The simulated bombs release smoke on impact, but the M-61 cannon fires live ammunition, rattling the aircraft with a deafening tremor and shattering targets on the ground.

The four-week drill is part of a string of non-stop exercises by U.S. land, sea and air forces in Europe — from Estonia in the north to Bulgaria in the south — scaled up since last year to reassure nervous NATO allies after Russia’s military intervention in Ukraine. U.S. and Russian forces are now essentially back in a Cold War-style standoff, flexing their muscles along NATO’s eastern flank.

The saber-rattling raises the specter that either side could misinterpret a move by the other, triggering a conflict between two powers with major nuclear arsenals despite a sharp reduction from the Cold War era.

“A dangerous game of military brinkmanship is now being played in Europe,” said Ian Kearns, director of the European Leadership Network, a London-based think-tank. “If one commander or one pilot makes a mistake or a bad decision in this situation, we may have casualties and a high-stakes cycle of escalation that is difficult to stop.”

With memories of five decades of Soviet occupation still fresh, many in the Baltic countries find the presence of U.S. forces a comfort rather than a risk.

In recent months, Estonia, Latvia and Lithuania have seen hundreds of U.S. armored vehicles, tanks and helicopters arrive on their soil. With a combined population of just over 6 million, tiny armies and no combat aircraft or vehicles, the last time tanks rumbled through their streets was just over 20 years ago, when remnants of the Soviet army pulled out of the region.

The commander of Estonia’s tiny air force, Col. Jaak Tarien, described the roar of American F-16s taking off from Amari — a former Soviet air base — as “the sound of freedom.”

Normally based in Aviano, Italy, 14 fighter jets and about 300 personnel from the 510th Fighter Squadron are training together with the Estonians — but also the Swedish and Finnish air forces. Meanwhile, Spain’s air force is in charge of NATO’s rotating air patrols over the Baltic countries.

“A month-long air exercise with a full F-16 squadron and, at the same time, a Spanish detachment doing air policing; that is unprecedented in the Baltics,” said Tarien, who studied at the U.S. Air Force Academy in Colorado Springs.

In Moscow the U.S. Air Force drills just 60 miles (100 kilometers) from the Russian border are seen in a different light.

American officials say their troop deployments are on a rotational basis.

Russia has substantially increased its own military activity in the Baltic Sea region over the past year, prompting complaints of airspace violations in Estonia, Finland and Sweden, and staged large maneuvers near the borders of Estonia and Latvia.

“Russia is threatening nearly everybody; it is their way,” said Mac Thornberry, the Republican chairman of the U.S. House Armed Services Committee, during a recent visit to Vilnius, the Lithuanian capital.

“They want to intimidate the Baltic states, Poland, Ukraine and Romania, country after country. And the question is, do you let the bully get away with that or do you stand up and say ‘no, you can threaten, but we will not allow you to run over u.s.,'” Thornberry said.

The Pentagon has said that some 3,000 U.S. troops will be conducting training exercises in Eastern Europe this year. That’s a small number compared to the hundreds of thousands of U.S. troops that have been withdrawn from Europe since the days when the Iron Curtain divided the continent. But the fact that they are carrying out exercises in what used to be Moscow’s backyard makes it all the more sensitive; the Kremlin sees NATO’s eastward expansion as a top security threat.

During a symbolic visit to Estonia in September, U.S. President Barack Obama said that the defense of the Baltic capitals of Tallinn, Riga and Vilnius is just as important as defending Berlin, Paris and London — a statement warmly received in Estonia, a nation of 1.3 million and with a mere 5,500 soldiers on active duty.

Welcoming the U.S. fighter squadron to Estonia, U.S. Ambassador Jeffrey D. Levine said the air drill was needed “to deter any power that might question our commitment to Article 5” — NATO’s key principle of collective defense of its members.

On Wednesday, The Associated Press observed bombing and strafing drills at the Tapa training ground both from the ground and from the back seat of one of the two F-16s taking part.

On board the fighter jet, the pull of the G-force was excruciating as the pilot swooped down onto his target before brutally ascending to circle the range.

After dropping six practice bombs each, the two jets returned to Amari air base, flying so low over the flat Estonian countryside that they frequently had to gain altitude to avoid radio towers.

On the ground, Lt. Col. Christopher Austin, commander of the 510th Squadron, dismissed the risk of his pilots making any rash moves that could provoke a reaction from the Russians.

“We stay far enough away so that we don’t have to worry about any (border) zones or anything like that,” he said. “We don’t even think about it.”