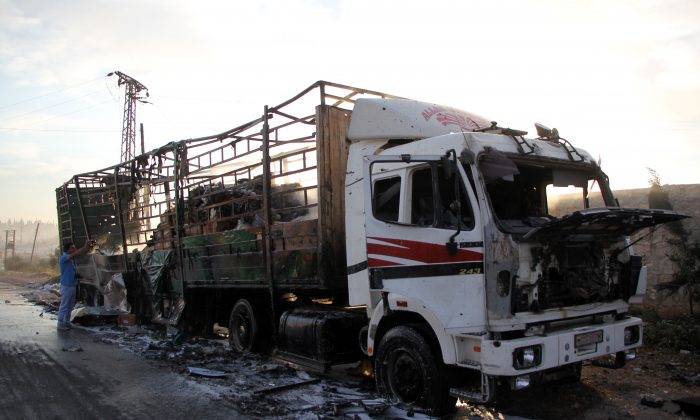 A humanitarian aid truck is destroyed following air strikes in the town of Orum al-Kubra on the western outskirts of Aleppo on Sept. 20, 2016, (OMAR HAJ KADOUR/AFP/Getty Images)
Middle East

The delicate cease-fire negotiated between the United States and Russia has faltered after aid agencies were bombed, killing 21 civilians.

The United Nations and other relief agencies suspended aid convoys into Syrian territory after the Sept. 19 attack on a Syrian Arab Red Crescent (SARC) warehouse and an aid convoy in rural Aleppo.

The attack was not from coalition forces, said a senior administration official. Whether it was Russia or the Syrian regime is still unknown, but the burden of responsibility lies on Russia to ensure regime compliance.

The Syrian regime, through its state-run media, has refuted the claims that they were responsible for the attack. Russia backed the regime’s assertion and also denied responsibility.

“No airstrikes on the U.N. humanitarian convoy in the southwestern outskirts of Aleppo were carried out by the Russian or Syrian aviation,” said official spokesman for the Russian Defense Ministry Igor Konashenkov.

The International Committee for the Red Cross (ICRC) said around 20 civilians and the director of SARC’s Urum al-Kubra branch, Omar Barakat, were killed as they unloaded supplies from aid trucks.

“From what we know of yesterday’s attack, there has been a flagrant violation of International Humanitarian Law, which is totally unacceptable,” said ICRC President Peter Maurer, in a press release.

“Failing to respect and protect humanitarian workers and structures might have serious repercussions on ongoing humanitarian operations in the country, hence depriving millions of people [of] aid essential to their survival,” he said.

“There can be no explanation or excuse, no reason or rationale for waging war on brave and selfless humanitarian workers trying to reach their fellow citizens in desperate need of assistance,” O’Brien said in a statement.

The convoy planned to provide relief to approximately 78,000 people, according to O’Brien.

The United States and Russia negotiated for months to enact the cease-fire. The objective was to halt combat operations for seven continuous days to allow humanitarian agencies to provide relief to besieged cities. If the cease-fire held, it would have lead to joint U.S.–Russian military cooperation to target the ISIS terrorist group and Jabhat Fateh al-Sham (formerly known as the al-Nusra Front).

The rebels didn’t disassociate themselves from al-Qaeda, the Syrian government failed to provide access to humanitarian agencies, and the United States was involved in an inadvertent attack against Syrian Army soldiers, according to Abrahms.

The Syrian government declared an end to the week-long cease-fire on Sept. 19 and fighting has renewed in many war-ravaged parts of the country, including Aleppo.

Just when we think it cannot get any worse, the bar of depravity sinks lower.
— Ban Ki-moon, U.N. secretary-general

Some experts disagree. “In all reality, the cease-fire is dead and combatants are returning to levels of fighting we saw before,” said Stratfor military analyst Sim Tack.

The cease-fire proved difficult mainly because the powers behind the deal, the U.S. and Russia, were unable to force compliance on their respective parties.

“Just because the U.S. and Russia reached a deal and installed a cease-fire doesn’t mean actors on the ground will follow it,” Tack added.

The breakdown of the cease-fire casts doubt on the future of U.S. and Russian military cooperation against terrorist groups like ISIS and stymies hope that a peace process could lead to a political transition and bring an end to the civil war.

In his last opportunity to open a U.N. General Assembly, outgoing Secretary-General Ban Ki-moon expressed outrage over the crumbling cease-fire and the attack on innocent people.

“Just when we think it cannot get any worse, the bar of depravity sinks lower,” Ban said in his address to the 71st annual session. “Yesterday’s sickening, savage, and apparently deliberate attack on a U.N.-Syrian Arab Red Crescent aid convoy is the latest example.”

Ban pulled no punches as he lambasted all sides in the conflict for fueling a war that has caused such great destruction.

“Present in this hall today are representatives of governments that have ignored, facilitated, funded, participated in, or even planned and carried out atrocities inflicted by all sides of the Syria conflict against Syrian civilians.”