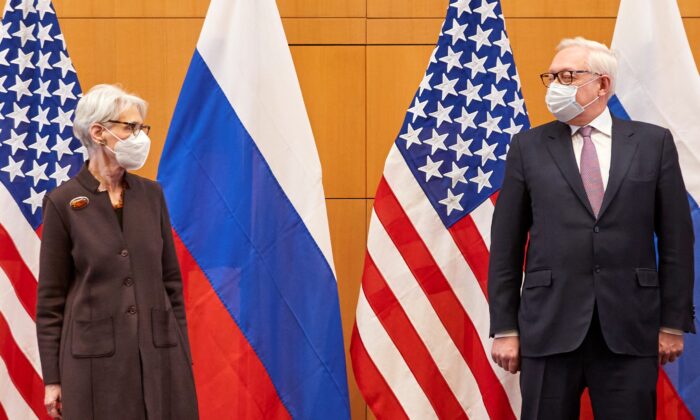 US, Russia Conclude Talks in Geneva With No Major Breakthrough in Sight

U.S. and Russian negotiators on Monday concluded special talks aimed at de-escalating ongoing tensions over Ukraine and a rise in military activity near Russia’s western border.

Not much information on the outcome of the bilateral talks, which lasted over seven hours in the Swiss city of Geneva, was immediately released. Senior diplomats on both sides appear to indicate that no major breakthrough is immediately in sight.

“Unfortunately we have a great disparity in our principled approaches to this,” Russian Deputy Foreign Minister Sergei Ryabkov said during a news conference on Monday. “The U.S. and Russia in some ways have opposite views on what needs to be done.”

Although not many details were provided, Ryabkov stressed after the meeting that Moscow has no plans to invade Ukraine.

Ryabkov and his team met with Wendy Sherman, the U.S. deputy secretary of state, as part of “Strategic Security Dialogue” talks aimed at arms control and other broad issues launched by Presidents Joe Biden and President Vladimir Putin during a June summit in Geneva.

U.S. Department of State spokesman Ned Price said in a statement that the deputy secretary is willing to listen to Russia’s concerns while welcoming genuine progress through diplomacy—she is not willing to discuss matters related to European security without its partners present.

Moscow released publicly a list of demands from the United States and its Western allies about a week before the talks, which included security guarantees that urged NATO to no longer expand eastward into former Soviet states like Ukraine.

Price said discussions related to European security will be reserved for the NATO-Russia Council meeting, which will take place in the capital of Belgium on Jan. 12, as well as during the Organization for Security and Co-operation in Europe (OSCE) meeting in Vienna the day after.

Some of the guarantees proposed by Russia are “simply non-starters for the United States,” Sherman said on a conference call with reporters, while Ryabkov thought Monday’s talks were “optimistic”—he doesn’t see an understanding from the U.S. side that satisfies Moscow.

Ryabkov also underscored that it is “absolutely mandatory to make sure that Ukraine never, never, ever becomes a member of NATO.”

“We do not trust the other side, so to say. We need iron-clad, waterproof, bulletproof, legally binding guarantees. Not assurances, not safeguards, guarantees with all the words ‘shall, must,’ everything that should be put in, ‘never ever becoming a member of NATO.’ It’s a matter of Russia’s national security,” he said.

Sherman, in response, said that U.S. officials will not make decisions about Ukraine without their consent and it will “not forego bilateral cooperation with sovereign states that wish to work with the United States.”

The Jan. 10 meeting was followed by an informal working dinner on Jan. 9, where Ryabkov already predicted “difficult talks” that are still to be followed by the NATO-Russia meeting in Brussels.

NATO Secretary-General Jens Stoltenberg said on Monday that he doesn’t expect the scheduled meetings to solve all issues, but it can open a path to receive a better understanding of each other.

Russia has said that it wants all issues resolved this month, but NATO is wary that Putin might be looking for a pretext, such as a negotiating failure, to launch an invasion.

Western nations raised concerns after nearly 100,000 Russian troops gathered within reach of the border with Ukraine eight years after Russia seized the Crimea peninsula from the former Soviet republic.

Russia has repeatedly denied invasion plans and said it is responding to what it calls aggressive behavior from the NATO military alliance and Ukraine, which has tilted toward the West and aspires to join NATO.

Biden, the EU, and the Group of Seven nations have warned Putin previously that Russia would face “massive consequences” and economic sanctions in the event of further aggression against Ukraine.

Ryabkov again laid out Moscow’s three demands on Jan. 9, saying they are seeking no further NATO expansion, no missiles on Russia’s borders, and for NATO no longer to have military exercises, intelligence operations, or infrastructure outside of its 1997 borders.

“The Russian side came here with a clear position that contains a number of elements that, to my mind, are understandable and have been so clearly formulated—including at a high level—that deviating from our approaches simply is not possible,” Ryabkov said.