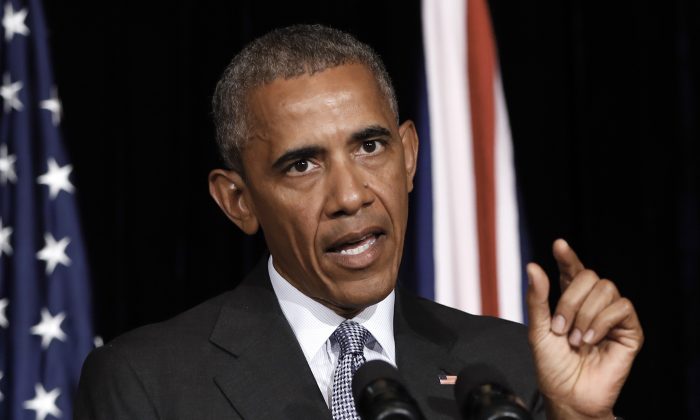 Amid Struggle for Syria Deal, Obama and Putin to Meet Monday

HANGZHOU, China—The United States and Russia struggled Sunday to keep alive negotiations to end the bloodshed between U.S.-backed rebels and Syria’s Russian-aligned regime. Even as top diplomats vowed to keep trying, President Barack Obama expressed skepticism that an unlikely alliance between rivals would yield the breakthrough needed to end the 5-year-old civil war.

Still, as Obama and Russian President Vladimir Putin attended an economic summit in China, the leaders were under pressure Monday to pick up where their top diplomats had fallen short. Obama and Putin were expected to meet Monday during a summit of the Group of 20 nations, while Secretary of State John Kerry planned to discuss with his Russian counterpart what Kerry described as “a couple of tough issues.”

The talks culminated a several weeks of searching for a cease-fire between Syrian President Bashar Assad’s government and moderate rebels that would expand access for hundreds of thousands of civilians caught in the crossfire. The strategy has hinged on an unlikely U.S.-Russian militarily partnership against extremist groups operating in Syria.

But beyond the ISIS terrorist group and al-Qaida, the two powers have conflicting views about who fits in that category—as well as a deep and mutual distrust that the other party will hold up its end of the bargain.

“We’re not there yet,” Obama told reporters Sunday. “It’s premature for us to say that there is a clear path forward, but there is the possibility at least for us to make some progress on that front.”

Obama’s wariness was less apparent among his State Department negotiators, who had been so hopeful a deal could come together while world leaders gathered in China that they scheduled a press conference and announced plans to brief reporters on the pact. Those plans deflated throughout the day, as both the briefing and the press conference were canceled. After an aide scrambled to remove the podium once intended for his bargaining partner, Kerry eventually announced there was no deal—standing alone.

“I’ve said all along we’re not going to rush,” said Kerry, who has negotiated several failed truces with Russia in recent months.

Kerry said the two sides had worked through many technical issues but said the U.S. didn’t want to enter into an illegitimate agreement. In recent days, the State Department has said it only wants a nationwide cease-fire between Assad’s military and the rebels, and not another “cessation of hostilities” that is time-limited and only stops fighting in some cities and regions.

A senior State Department official said the talks first faltered on Sunday when Russia pulled back from agreement on issues the U.S. negotiators believed had been settled. The official, who wasn’t authorized to discuss negotiations publicly and requested anonymity, didn’t elaborate. Kerry and Russian Foreign Minister Sergey Lavrov were consulting with their governments before talks resume on Monday morning.

The conflict has killed as many as a half-million people since 2011 and caused millions of Syrians to flee their homes, contributing to a global migration crisis. Amid the chaos, IS has emerged as a global terror threat.

Kerry and Lavrov’s talks represent their third significant attempt since July to finalize a new U.S.-Russian military partnership that Moscow has long sought. The package would include provisions so aid can reach besieged areas of Syria and measures to prevent Assad’s government from bombing areas where U.S.-backed rebels are operating.

U.S. officials have said that as part of a deal, Russia would have to halt offensives by Assad’s government, something it has failed to do over months of diplomatic efforts. And the U.S. must get rebels to break ranks with the al-Qaida-linked Nusra Front, a task that grew tougher after its fighters last month successfully broke the siege of Aleppo, Syria’s largest city and the site of fierce recent fighting.

Negotiators on both sides have spent weeks poring over maps of potential areas where opposition groups operate and where Assad’s forces would be prohibited from launching airstrikes. The idea is for Russia to use its significant influence over Assad to ensure compliance with the deal.

But the U.S. has long been skeptical of the military coordination part of the deal, because it says Russia has mainly targeted moderate, U.S.-backed opposition groups in a bid to prop up Assad. The U.S. wants Russia to focus exclusively on ISIS and al-Qaida-linked groups. Both Defense Secretary Ash Carter and National Intelligence Director James Clapper have expressed misgivings about sharing intelligence and targeting information with Moscow.

Neither side explained Sunday in detail what sticking points remain. Kerry said the U.S. wanted a deal with the best chance for survival. Lavrov’s deputy, Sergei Ryabkov, said a deal was “close” but that Washington had to dissociate itself from Nusra.

“Many of the groups considered acceptable by the U.S. have actually affiliated with the Nusra Front, while the Nusra Front is using them to avoid being attacked,” Ryabkov told Russian media, citing a longstanding complaint of his government.