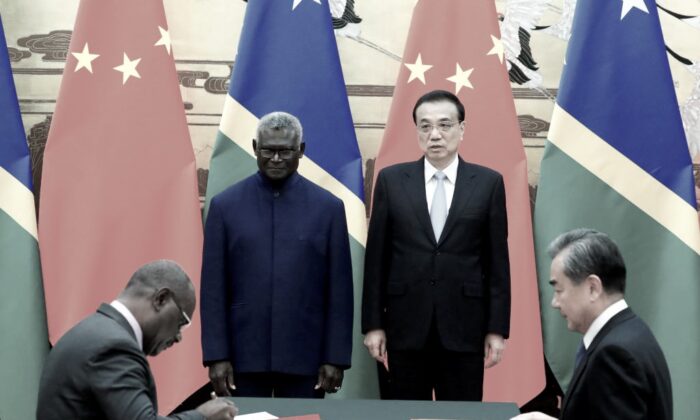 The Pacific Islands have been in the spotlight, especially in the aftermath of the newly-signed China-Solomon Islands security agreement that would pave the way for the regime to station its military forces there.

The territory sits in the second island chain that contains U.S. Naval Base Guam.

Given its strategic position, if the United States can not counter China in the region, it is bound to lose its pre-eminent power and would be put on the defensive, according to two security experts.

If the Pacific Islands are lost to the Chinese regime, “we would finally face an enemy, face a situation where we would be on the defensive, and from much closer to American territory,.. actually from Hawaii, from a lot closer to the U.S. West Coast,” said Grant Newsham, a senior fellow with the Center for Security Policy

“It would not be the same as losing a sort of huge battle without the casualties, it would be an absolute blow to American credibility and prestige,” Newsham said in an interview with NTD, the sister media of Epoch TV.

Trump-era Director for Oceania and Indo-Pacific Security Alexander Gray further stressed both the military and economic importance of the Pacific region for America.

Thus, Gray made a note that if Beijing gains an upper hand in this territory, it would impose an economic threat to the United States.

He singled out the dislocation to the American supply chain during the pandemic, saying, “As long as we continue to have an economy that requires cheap imports to fuel our consumer, our consumer spending habits, that’s going to require a navy and projection forces that can traverse the Pacific, keep the sea lanes open, and allow the engine of our economy to keep churning.”

“And so, if we have a Chinese base, or an access agreement, in places like one of the Micronesian islands or …. Vanuatu or Papua New Guinea or the Solomon Islands, there’s going to be a significant danger to the ability of the United States to operate freely and independently in the Indo-Pacific. And that’s a military threat, …economic threat,” Gray noted.

Gray further urged the Biden administration to take substantive measures to push back the influence of China in the region.

First, according to Gray, there should be an American embassy in every country of the Pacific Islands.

Second, he pointed to the Compacts of Free Association agreement between America and Micronesia and the Marshall Islands, and one with with Palau in which the United States committed to provide financial assistance. He described it as “absolutely critical, economically, diplomatically and militarily.”

“These are special relationships that we have with those three countries that allow us access militarily in exchange for some economic support, and some political support,” Gray said.

“All three of those [agreements] are going to need to be renewed in the next few years,” he noted, yet, “we have seen no substantive progress made under this administration to get that done.”

Gray further stressed the importance of such a move.

“That is an absolute bellwether for the region. Every Pacific state is looking at whether the Americans can renew these pivotal agreements with our closest Pacific partners,” he said.

“If we can’t get something that simple, and that is strategically critical, done, it’s going to have a chilling effect across the Pacific Islands. And it’s going to play right into the Chinese hands,” he added.

“The National Guard has partnerships with a number of militaries in the region, we should be expanding those as far as we possibly can,” he said.

In Newsham’s opinion,  America and its allies should have a business presence in the region as well.

“We need to get American, but also Japanese, Korean, Taiwanese Indian, and Australian businesses into the region,” he said, otherwise, “there’s going to be much more of a Chinese presence if we’re not there to counter it.”

Newsham further suggested efforts to expose China’s malicious economic activities, which he described as “a sort of magic ingredient that the Chinese have, that really helps them dig into a place”—corruption.

“It’s the bribery, the under the table payments, it’s these management visits that they host to the Chinese regime, where you get an envelope full of cash on arrival,” he said.

“There’s people in all of these islands who want a clean, clean governance, a clean society. They don’t like what they’re seeing with the Chinese influence,” Newsham said.

“Spend some of that $90 billion intelligence budget we have on the Pacific Islands and expose this,” he suggested.

“That would make Chinese efforts a lot less effective than they have been,” he said.

The Epoch Times reached out to the White House for comments but had not received a response as this publication.